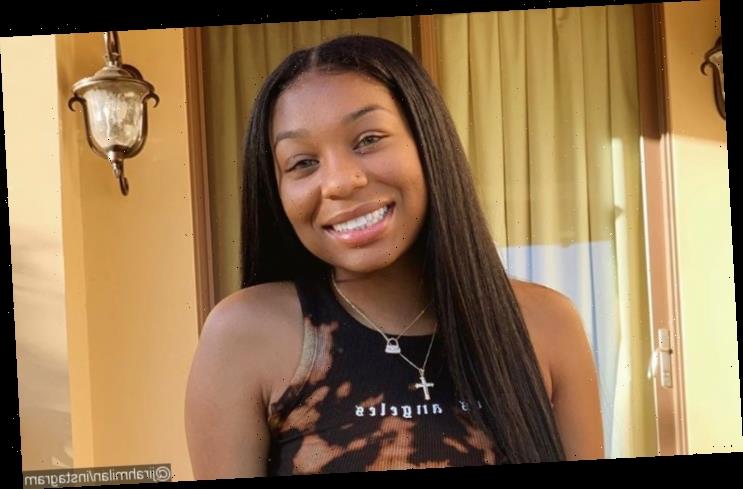 During the Live session, Jirah Mayweather makes her 20-year-old sister speechless when she suddenly acts as if she is cradling a baby bump in a white crop top and denim pants.

AceShowbiz -It looks like rumors of YaYa Mayweather‘s pregnancy are true. Her sister Jirah Mayweather appeared to confirm the speculation when she joined the 20-year-old social media star on her Instagram Live session on Friday, September 25.

During the stream, Jirah stepped in front of the camera in a white crop top and denim pants, prompting YaYa to gush over her in the background. “You look good,” she raved, to which her sister asked back, “Are you on Live?” YaYa then told Jirah to say something to the camera, but instead of doing what she was told to, Jirah simply stared at her sister before acting as if she was cradling a baby bump.

It’s safe to say that YaYa did not expect her sister to do that because she fell into silence and ended the Live right away.

Her sister’s action made people even more convinced that YaYa is expecting her child with NBA YoungBoy (YoungBoy Never Broke Again). “Youngboy must got a voodoo. These girls never the same when they meet him,” one person said. “Not she tried to tell us that Yaya pregnant,” another commented, while someone chimed in, “YaYa is pregnant Nd her sister was being funny about it.”

YaYa first sparked pregnancy speculation earlier this month after some clips of her hanging out with her friends surfaced online. In one of the videos, her friends could be seen showing off their sneakers to the camera before accidentally capturing Yaya, who was dressed in all-black, appearing to sport a baby bump. After realizing that they might have exposed her pregnancy, her friends uttered, “Oh, s**t,” and the camera was switched back to selfie mode.

Further fueling the rumors was her mom Melissia Rene. When one of her Instagram followers told her, “Congratulations on your grand baby,” she simply reacted by saying, “Thank you!!”