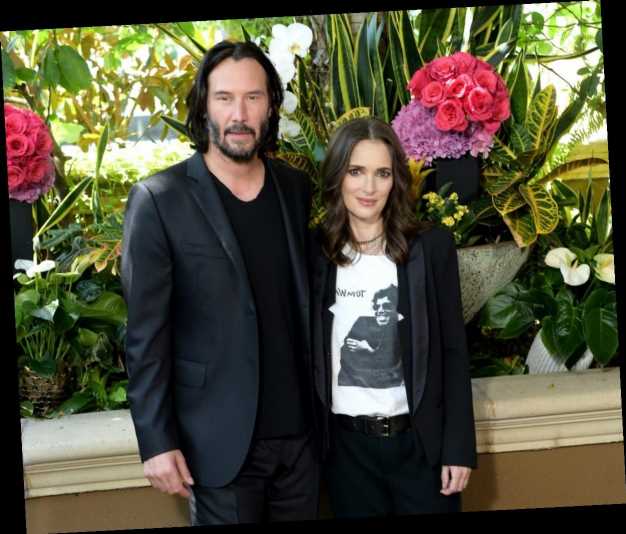 Keanu Reeves and Winona Ryder have enormous chemistry on-screen but their off-screen love for each other is pretty amazing to watch, too. During an interview for their movie Destination Wedding, Ryder shared that her love for Reeves is so deep, she would definitely marry him.

During a 2018 interview with Extra that promoted Destination Wedding, they were asked whether the movie made them warm up to the idea of getting married or turned them off to it.

Reeves started the interview by gushing about his co-star, saying, “I’m a big fan of Winona’s. Her work and her personhood …”

The interviewer wondered, “So does this movie make you both want to get married or the opposite?”

Winona confirmed that she’d happily marry Reeves. “To him? … yeah,” she said without hesitation, as she pointed to the actor.

Ryder signed on for the movie and wanted Reeves as her co-star. “I knew the only way it would work is if it was somebody that I had chemistry with and that’s him,” she explained.

The interviewer also asked the burning question every Reeves and Ryder fan wants to know: do they hang out in real life? They shared that they do, though Ryder had been very involved with filming Stranger Things at the time.

While the moment was certainly sweet, Reeves and Ryder might already be married … for real, due to a technicality while filming Bram Stoker’s Dracula in 1992.

“We actually got married in Dracula,” Ryder told EW. “No, I swear to god I think we’re married in real life.”

“In that scene, Francis [Ford Coppola] used a real Romanian priest,” she explained. “We shot the master and he did the whole thing. So I think we’re married.”

Reeves couldn’t recall for sure, asking, “We said yes?”

“Don’t you remember that?” Ryder told him. “It was on Valentine’s Day.”

Even though Reeves and Ryder gushed about their love for each other in real life, one of their on-screen Destination Wedding moments was so awkward, one interviewer called it “the most unsexy sex scene.”

During a 2018 interview with Access, they were asked about the very unromantic sex scene that plays out in Destination Wedding. “You’re both very, very attractive, yet I have to say you give the most unsexy sex scene I’ve ever seen,” the interviewer stated. “That’s a real achievement. Was that as awkward as it appeared?”

Reeves dished on what it was like to play out that moment. “We run away [after encountering a mountain lion], we fall down, and we end up sprawled together in the grass and because of this kind of flush of death, we get this flush of life.”

It was definitely an awkward moment, however, as the two characters connected intimately, but it didn’t play out in a very sexy way.

“They’re not necessarily giving themselves completely over to losing themselves,” Reeves explained. “They’re both still kind of self-conscious. So, as we’re going at this wonderful, beautiful miracle, we talk.”

“But we do both get to go to a happy place,” he added.