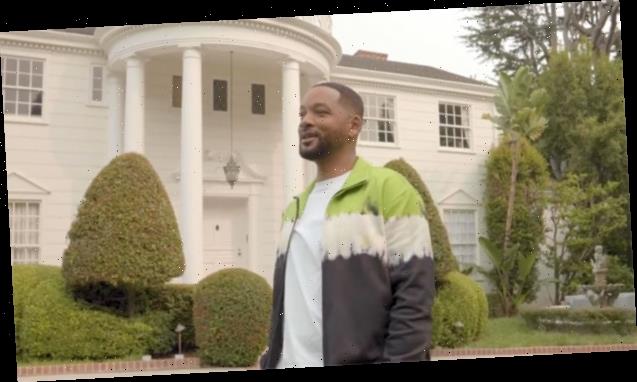 Will Smith ventured back to Uncle Phil and Aunt Viv’s mansion in ‘The Fresh Prince of Bel-Air,’ which will soon be listed on Airbnb! He was joined by his former co-stars like Joseph Marcell and Daphne Maxwell Reid.

Will Smith, 52, stepped back into the mansion that his character was dropped off at 30 years ago in The Fresh Prince of Bel-Air premiere. The sitcom star released a YouTube video of this special house tour on Sept. 28, a day before Airbnb will also give fans the chance to book a stay in the Fresh Prince’s wing of the mansion — for only $30 a night! For the house tour, Will was joined by many of his Fresh Prince co-stars and even his old music partner and childhood friend, DJ Jazzy Jeff.

Before entering the mansion, Will stared at the Brentwood property in wonder, which looked exactly the same as it did in 1990. “What do you think ‘that Will’ character would be doing now being back here?,” someone asked behind the camera. The Men in Black star teased, “Yeah, he’d want a bigger house than this now.”

Will made his way to the special room that a few lucky guests will get to stay in on select dates throughout October! The bedroom was transformed to look like the one Will shared with Carlton on the show (on the show, the interior of the mansion was actually a set inside a studio). Will marveled at a collection of the Air Jordan shoes that he once wore on the show, his throwback records with DJ Jazzy Jeff, and a special Bel-Air Athletics anniversary collection. “Alright, I’ll stay. I know it’s supposed to be for other people, but I need this for myself,” Will joked as he took it all in.

Later in the video, a few of Will’s co-stars joined the house tour: Joseph Marcell (who played Geoffrey Butler), Daphne Maxwell Reid (who played Aunt Vivian Banks in Seasons 4-6) and Tatyana Ali and Karyn Parsons (who played the iconic cousin duo Ashley and Hilary Banks). Sadly, they couldn’t be joined by James Avery, the legendary actor for Uncle Phil who sadly passed away in 2013. The cast made sure to honor Uncle Phil, however, by taking a moment to look at his portrait inside the mansion.

For Will, the mansion was more than a setting for a TV show. “This image represents everything the Banks family represented. It’s like, all of the hopes and all of the dreams and all of the possibilities, being able to grow and excel in a world, being able to have family and love, make mistakes and not get punished for it and get caught by someone who cares for you,” Will explained. “That image represents an image and a ladder to become whatever the greatest version of yourself is.”

A reunion special for The Fresh Prince of Bel-Air will also be airing on HBO Max, which was taped on Sept. 10! Will even reunited with the original actress for Aunt Vivian — Janet Hubert — and proved that their alleged beef, if the rumors were true, is a thing of the past.