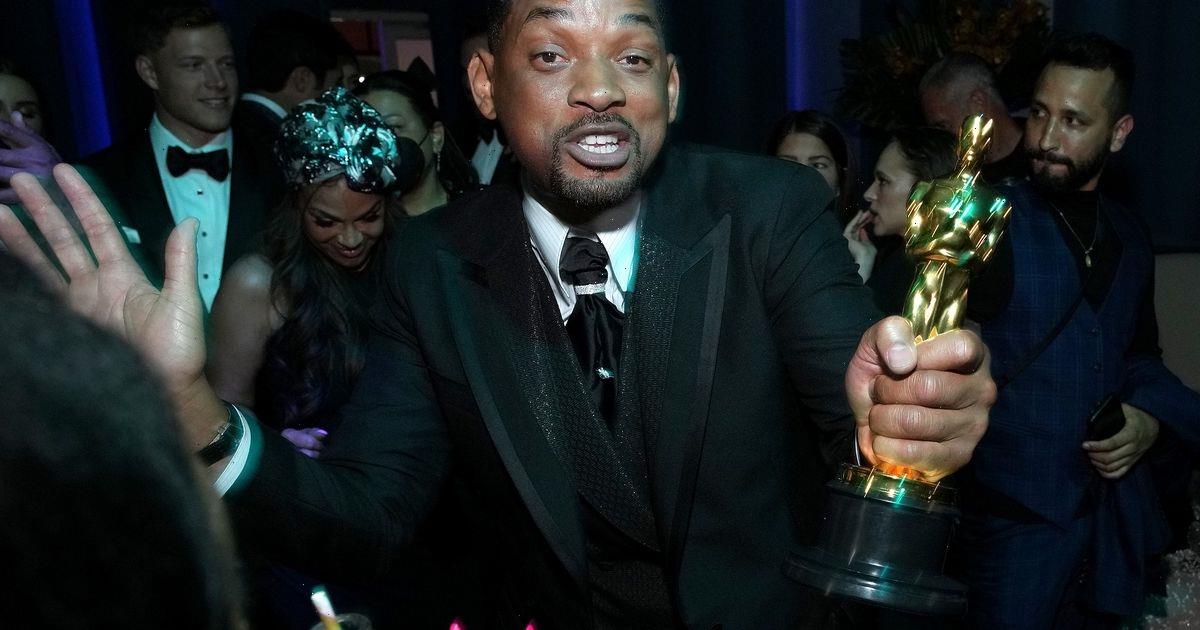 Will Smith looked like he was putting the night’s earlier drama behind him as he partied following his win at the Oscars.

Earlier in the night, the 53 year old actor had caused one of the ceremony’s most talked about moments when he punched Chris Rock in the face after the comedian made a joke about his wife Jada Pinkett-Smith.

However, a few hours later, the actor looked more concerned about celebrating his Oscar win.

The star won the Best Actor award for his role in King Richard, where he plays the father of tennis superstars Venus and Serena Williams.

Will has already won numerous awards for his role in the film, including best actor at the BAFTA and Critics Choice awards, and Best Actor (drama) at the Golden Globes.

The film gave him his first Oscar win for Best Actor, having been first nominated for the award twenty years ago – for Ali in 2002 and then later in 2007 for The Pursuit of Happyness.

At the star-studded Vanity Fair party, the actor was seen letting loose after his win, where he posed for selfies, danced with friends and rapped along to his biggest hits including Summertime and Gettin' Jiggy Wit It into the early hours of the morning.

He was joined by wife Jada and their children, who were seen laughing and dancing by his side.

The shocking scenes earlier in the night unfolded when comedian Chris, 57, teased Jada over her shaved head and said he couldn't wait to see her in the next "G.I. Jane" movie.

The 50 year old actress has alopecia and has been open with her hair loss struggles since 2018.

At first, Will appeared to laugh at Chris's poorly-timed joke at the prestigious Academy Awards ceremony.

But when an upset Jada rolled her eyes dramatically and then glanced at the father of her two children Jaden and Willow, 53 year old Will stormed up onto the stage to defend his wife.

Smacking Chris across the face, Will then warned: "Keep my wife's name out of your f****** mouth."

Later that evening, the actor collected his Best Actor award for his role in the critically-acclaimed movie King Richard.

During his acceptance speech, the Fresh Prince of Bel Air star took the opportunity to apologise to Chris for reacting to his comments in a violent manner.

Stunned to be the winner of his first Best Actor Oscar, Will told the audience: "Love will make you do crazy things."

The star then revealed Denzel Washington had approached him after the slap and told him: "At your highest, that’s when the devil comes for you."

Will went on to apologise to the Academy, and to his fellow nominees.

Rapper Sean 'Diddy' Combs was the next star to take to the stage following Will's actions, as he tried to move on through jest.

"Will and Chris, we’re going to solve this like family. Right now we’re moving on with love. Everybody make some noise," he said.

Chris has made jokes about Jada at the Oscars once before, when he was presenting the show back in 2016.

At the time, he quipped: "Jada Pinkett Smith boycotting the Oscars is like me boycotting Rihanna’s panties—I wasn’t invited!