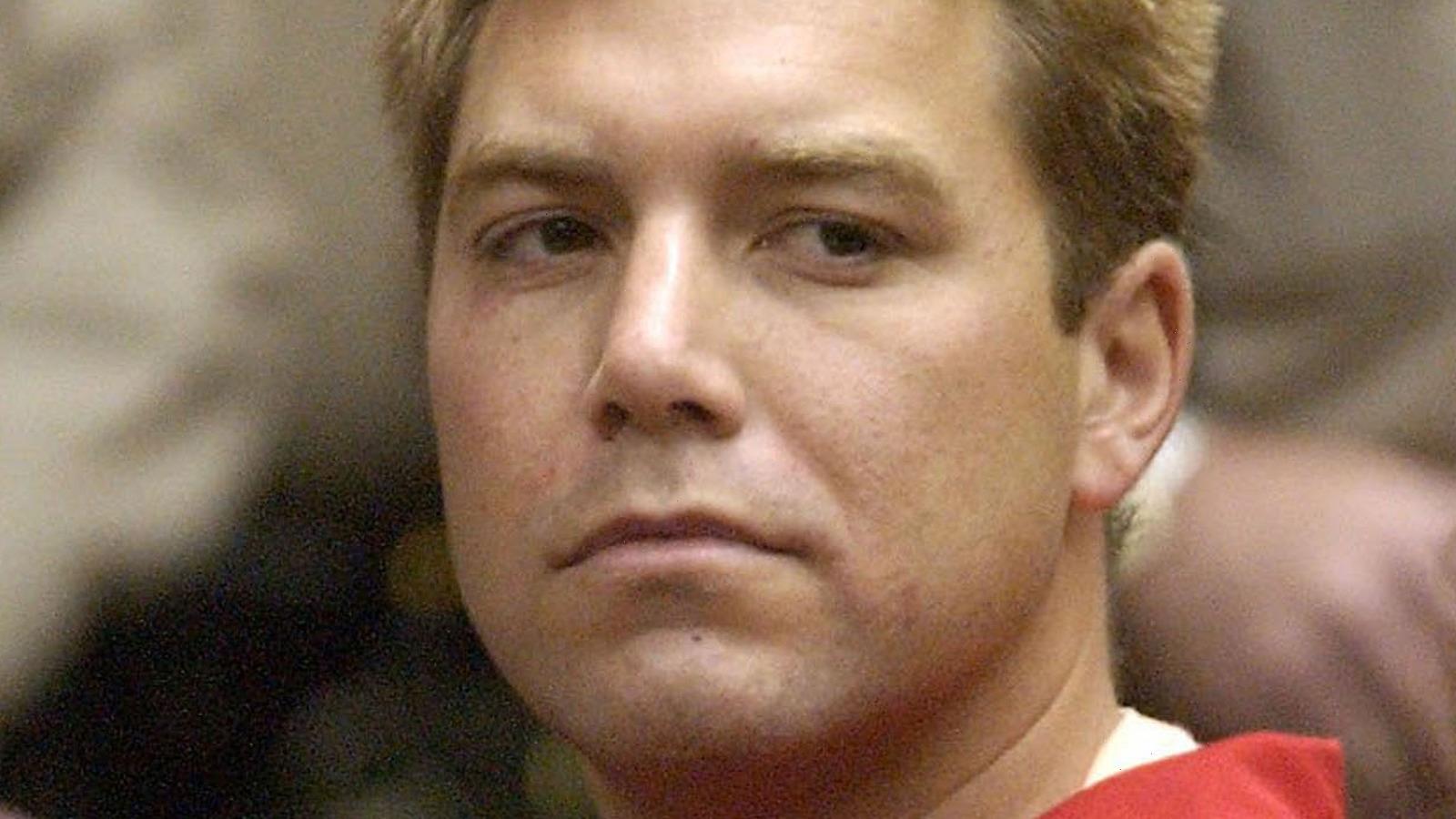 Even though it’s been 17 years since Scott Peterson was sentenced for the murder of his pregnant wife, Laci Peterson — a sentence that was initially for the death penalty, but changed to a life term in 2020 — it seems there might be a chance his conviction could be overturned entirely in favor of a retrial. As NBC News reported in August, the possibility of a new trial for Peterson, at the time of this report, hinges on whether or not a California judge rules as to whether Peterson’s conviction hinged upon jury misconduct.

Per the news network, Superior Court Judge Anne-Christine Massullo was appointed to decide as to whether a juror in the case, a woman named Richelle Nice, had prejudiced the jury and their verdict due to her own personal history. It turned out that Nice did not disclose during jury selection that she had past abuse she endured while pregnant.

While it’s unclear as to when Massullo will finally make a ruling on the integrity of the Peterson case, it might certainly be on the mind of Amber Frey, Peterson’s former affair partner and the woman who was instrumental in his arrest by aiding authorities. Despite her brave conduct and her dedication to bringing Peterson to justice, however, a new trial could unravel it all — and possibly free a man she once said she was afraid of. Read on to find out more. 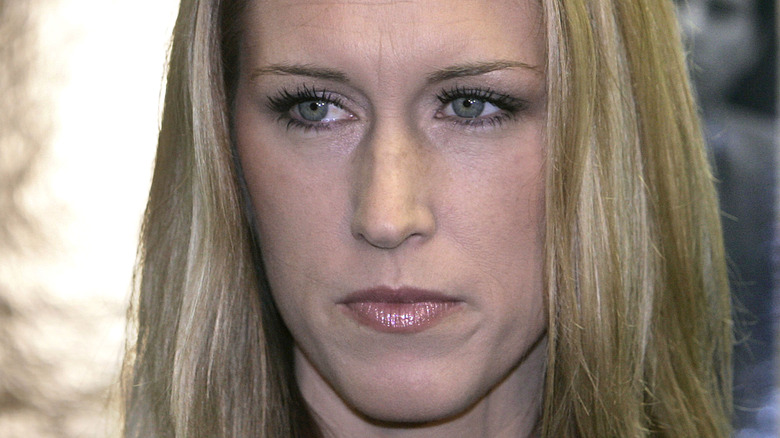 As both the Scott Peterson court case and Amber Frey have corroborated, Frey was a 27-year-old massage therapist living in Fresno, California when she met Peterson, a 30-year-old fertilizer salesman, through a mutual friend in November 2002. In a 2017 interview with ABC News, Frey recalled her impression of Peterson, describing him as “good looking,” “nice,” “funny,” and “attentive.” In a nutshell, he was “all the things any woman would want.” Frey was also completely unaware that Peterson, who lived in Modesto, California, wasn’t single, as he presented himself to be. In reality, he was married to Laci Peterson, then seven months pregnant. Peterson continued to carry on with the unaware Frey, concealing his marriage while launching himself into a new romance with a woman who conveniently lived nearly two hours away by car.

Frey had only been dating Peterson for a few weeks before she learned the truth from a newspaper headline. As ABC summarized, Frey discovered that not only was Peterson married to Laci Peterson, but that Laci, at that point eight months pregnant, had disappeared on December 24, 2002. Instead of confronting Peterson, she immediately called a tip-line the Modesto Police Department had set up in hopes of finding Laci. “I was in shock,” Frey recounted. “I was just trembling and I was like, ‘It is him.'”

Amber Frey became an integral player in the Peterson investigation 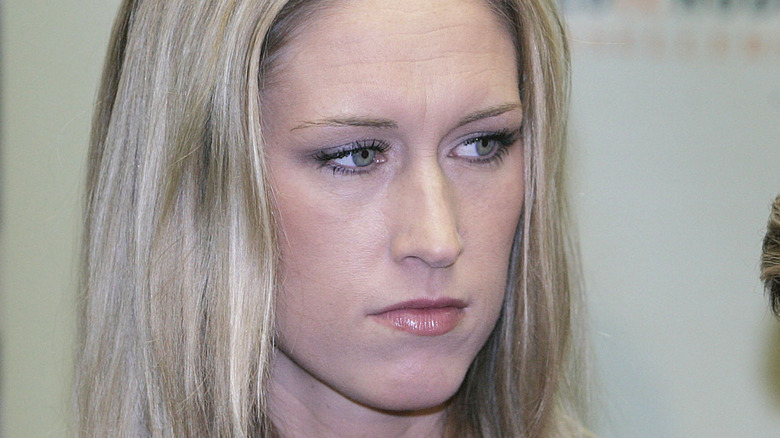 While Amber Frey was later villainized by the press during the Scott Peterson trial by being cast in the role of “the other woman,” Frey had entered her relationship with Peterson in good faith, without knowing he was actually married. (Though she suspected Peterson was married at one point, Peterson adamantly denied it, insinuating she had already died.)

As soon as Frey became aware of Peterson’s marital status — and more importantly, that his wife had been reported missing — she automatically and emphatically informed the Modesto police that she was willing to do whatever they needed to help their investigation. Though Frey told ABC News in 2017 that the prospect of continuing to communicate with Peterson — especially if there was a chance he had killed his own wife — was one fraught with “fear,” she also reasoned that the priority of finding Laci Peterson dead or alive outweighed anything else.  “It wasn’t about me,” Frey said. “It was about finding this woman.”

Fully knowing the risks, Frey routinely spoke with Peterson while secretly recording their conversations. Over the course of two months, Frey carried on with the sting while following along with the investigation on the inside as a de facto informant and while the media covered the case vigilantly.

Things were far from over after Scott Peterson's arrest 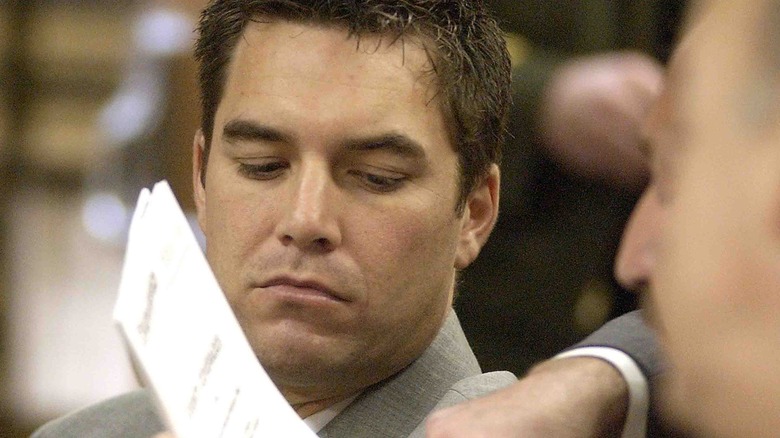 In one of the more jarring and surreal stories from this case, Amber Frey received a call from Scott Peterson on the night of New Years Eve in 2002 — the same night a vigil was held for Laci. Calling from the site of the event meant to honor his missing wife, Peterson told Frey he was at the Eiffel Tower in Paris. But nearly a week after the Paris phone call occurred, it seems Peterson realized he couldn’t feasibly keep on lying to Frey about the fact that he was married by proxy of the press attention Laci Peterson’s disappearance received. On January 6, 2003, Peterson came clean about how he had not been in Europe during their New Years Eve phone call for a business trip, and revealed the truth about Laci missing.

After hours upon hours of taping conversations with a possible murderer who still assumed he was her boyfriend, Frey’s work finally paid off after the remains of Laci and her unborn son, which she and Peterson had intended to name Conner, were found in the San Francisco Bay on April 13, 2003. Peterson was arrested five days later after a failed attempt to purportedly flee to Mexico and charged with the murder based on forensic evidence. The audio recordings were submitted as key evidence for Peterson’s trial, and helped aid in his conviction. But for Frey, everything was far from over. 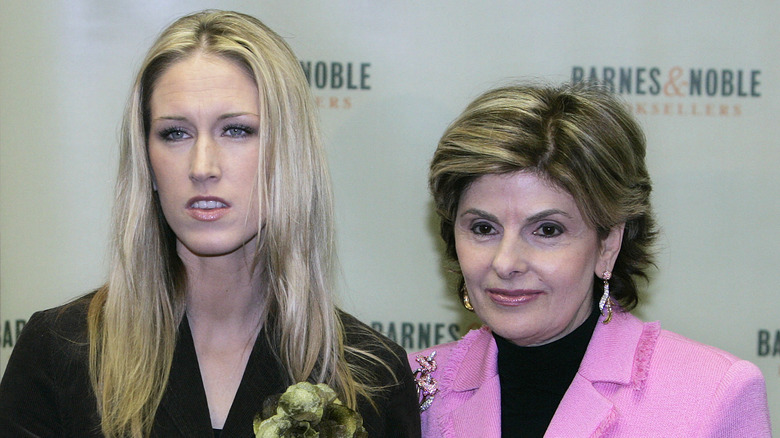 As Oxygen reported in April, the very real possibility that Scott Peterson’s conviction could overturn and lead to a new trial if the court rules that juror misconduct essentially tampered with the outcome of the case would mean Amber Frey would most likely have to testify. Even though that scenario could mean revisiting an incredibly traumatic time in her life, Frey’s lawyer, Gloria Allred, told HLN that like last time, Frey would once again rise to the challenge to do what’s right for the memory of Laci Peterson. “Is she looking forward to it? No,” Allred said during the interview. “Nobody is looking forward to being a witness in a high-profile case, but you know, she will do it and she knows that it’s important to the cause of justice and that’s why she will do it, if asked to do it.”

Presumably, the audio tapes used in Peterson’s 2004 trial would once again be played for a jury pool along with Frey’s first-person testimony. But this time, there could also be fuel for Peterson’s defense, thanks in part to his sister-in-law, Janey Peterson, who has come up with an alternate theory as to who killed Laci, how it was done, and the motive behind it all. Even so, only time will tell whether Peterson will remain in prison, or become a free man.