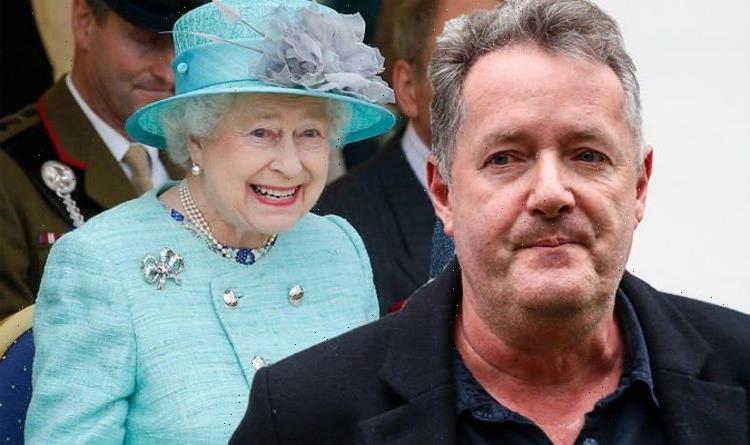 Have I Got News For You: Stephen Mangan mocks Piers Morgan

Piers Morgan, 55, has applauded the Queen, 95, today after she turned down receiving the Oldie of the Year award. The monarch “politely but firmly” declined the accolade, but sent a message with her “warmest best wishes”.

Author and broadcaster Gyles Brandreth, chairman of the awards, wrote to the Queen’s private secretary, Sir Edward Young, to ask if she would accept the main Oldie of the Year award.

But in a letter published in the November issue of the magazine, her assistant private secretary, Tom Laing-Baker, wrote: “Her Majesty believes you are as old as you feel, as such The Queen does not believe she meets the relevant criteria to be able to accept, and hopes you will find a more worthy recipient.”

The Queen, who is just five years away from her 100th birthday, is the nation’s longest-reigning monarch and is due to celebrate her Platinum Jubilee – 70 years on the throne – next year.

The reigning monarch still keeps a busy diary of events and audiences and deals with her daily red boxes of official papers.

At recent engagements, the Queen has used a walking stick, but over the weekend she left it with an aide who was walking closely behind her.

Today, she is hosting a reception at Windsor Castle for international business and investment leaders to mark the Global Investment Summit.

Her daughter-in-law, the Duchess of Cornwall, joined Brandreth for the publication’s first in-person awards ceremony since 2019 at The Savoy hotel in London.

Putting on a stylish display, the Duchess of Cornwall wore a navy dress with white collar and cuff detail and black piping, and paired her ensemble with black tights and pumps.

The royal, who kept her makeup natural, was seen sporting her usual coiffed hairstyle – and completed her outfit with dangling pearl earrings.

For the past 29 years, the Oldie of The Year Awards have celebrated the achievements of those of the older generation who have made a special contribution to public life.

Previous winners have included everyone from Oscar winners to Nobel laureates, from community care nurses to veteran athletes, from Sir John Major to Dame Olivia de Havilland and David Hockney.

DONT MISS:
Tom Jones urged to ‘look after himself’ by Zoe Ball  (PHOTOS)
‘I needed to’ Julia Bradbury ‘put on a few kilos’ after mastectomy (NEWS)
‘Don’t get handouts’ Madonna shares none of her wealth with daughter (LATEST)

Last year’s award went to Downtown singer Petula Clark, who has had a successful eight-decade career in showbusiness during the Blitz.

Brandreth revealed that actress Dame Maureen Lipman, one of the judges, raised the prospect of the magazine honouring the Queen in recognition of her leadership during the pandemic and ahead of the Jubilee.

He described the letter he received from Balmoral Castle in response as “lovely”, writing: “Perhaps in the future we will sound out Her Majesty once more.”

The late Duke of Edinburgh was named Oldie of the Year in 2011 to mark his 90th birthday.

Philip wrote a letter of appreciation, joking: “There is nothing like it for morale to be reminded that the years are passing – ever more quickly – and that bits are beginning to drop off the ancient frame.

“But it is nice to be remembered at all.”

The Queen’s husband of 73 years died peacefully back in April shortly before reaching his 100th birthday.