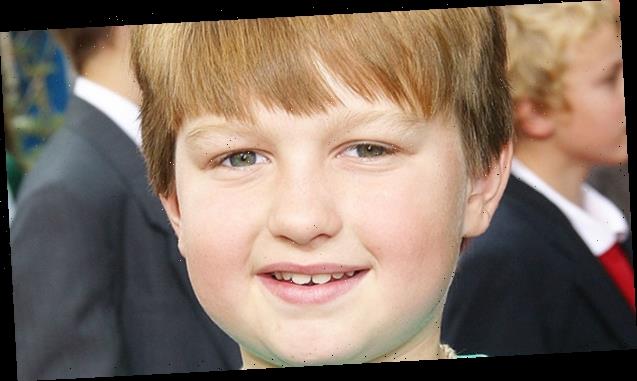 Angus T. Jones was spotted looking a lot different from his days on ‘Two and a Half Men’, which he quit in 2012, when he was walking outside his Los Angeles home with long hair and a beard on Oct. 27.

Angus T. Jones, 27, has been mostly out of the public eye since he dramatically quit his role on Two and a Half Men in 2012, but he was seen again on Oct. 27 and looked quite unrecognizable! In pics obtained by the Daily Mail, which can be seen here, the actor, who also made a cameo on the sitcom in 2015, was walking outside his Los Angeles, CA home while sporting long hair and a beard as he watched firefighters take out a blazer nearby. He wore a black T-shirt with a white Apple logo on it along with a knit hat and sunglasses.

The latest sighting of Angus comes 17 years after he first starred in Two and a Half Men, which became one of the most popular sitcoms of the 2000s, as a young child, and eventual clean-cut but controversial teen. He played Jake Harper, the “half role” of the men in the series, who was a kid living with his divorced father, played by Jon Cryer, and uncle, played by Charlie Sheen. As he got older, producers had his character smoking marijuana and dating older women, but by Nov. 2012, Angus made headlines when he said he’d been “baptized” and no longer wanted to appear on the series in a YouTube video he posted.

He also went on to discourage others from watching the series that helped him break into the acting spotlight when he called it “filth”. He never returned to the series after season 10’s ending, which aired in 2013, but he did end up making his cameo appearance during the show’s final season in 2015.

Despite the controversial exit from the show, Angus made sure to keep busy in other things apart from acting. He attended the University of Colorado, where he started off studying environmental studies but later switched to Jewish studies by the end of his freshman year.

In 2013, he made headlines again when he talked about his experience on Two and a Half Men, in an interview with Seventh-Day Adventist filmmaker Christopher Hudson. He said being on the show was “incompatiable with being a ‘true God-fearing person’.” In 2016, Angus gave an update about his life to PEOPLE and admitted he was thinking of “slowly” returning to acting.

“Over the last three years I’ve been involved with various faith-based organizations,” he told the outlet. “Right now, I’m stepping away from the organizational business-model programs. I’m interested in seeing where I go without an organization putting a stamp of approval on if I’m good or bad or whatever.”

“The door is definitely still open for me to do that, but I’m taking things slowly,” he continued when talking about acting. “But I’m kind of liking the ability to travel and to move around at a moment’s notice and not have to be in one spot for years at a time. In terms of regrets, I try to avoid those completely. There’s no changing anything. There’s only moving forward.”

Angus’ last acting role was on an episode of Horace and Pete in 2016.