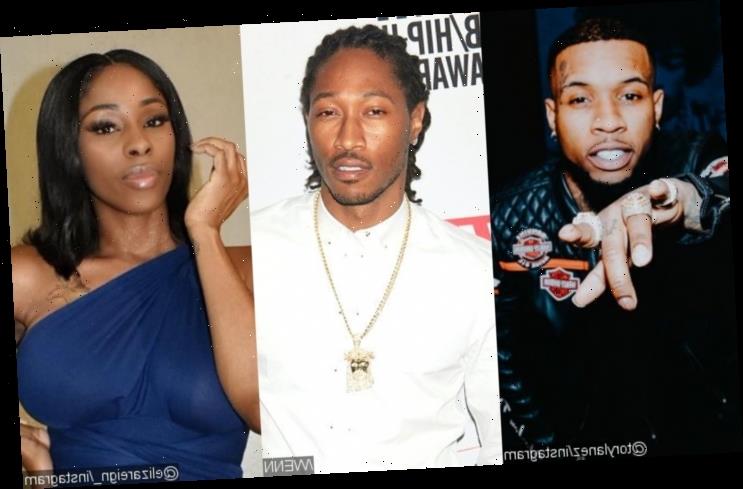 In an Instagram Stories clip, which is seemingly taken at the rapper’s house that he turns into a nightclub, sees a woman piggybacking another woman while laughing.

AceShowbiz –Tory Lanez is indeed a social butterfly. The “Jerry Sprunger” spitter proves that he deserves the title as he took to Instagram Stories to share a video of two women with whom he was hanging out. Apparently, one of them was Future‘s baby mama Eliza Reign.

The clip, which was seemingly taken at his house that he turned into a nightclub, saw one of them piggybacking the other while laughing. Despite the dimly-lit room, The Shade Room noticed that the lady on top sported a tattoo that was similar with the one that Eliza had on her chest.

“Looks like #ToryLanez has friends everywhere because some of our #Roommates seem to think he was hanging out with #Future’s baby momma, #ElizaReign What do y’all think?” the blog captioned the post featuring Tory spending time with Eliza.

Although it’s news that the Canadian star was creeping with Future’s ex, some were not interested. “Stay out dem people business…,” a user wrote in the comment section. “She’s a grown and single woman. Mind ya business and tell future he owes back child support,” another person added, with someone echoing the sentiment, “I think y’all should mind your business.”

Neither Tory nor Eliza has yet to comment on the matter.

Meanwhile, Eliza is still involved in a legal battle with Future. “In all seriousness, as women, we must stick together and stand against abuse of any kind,” Eliza posted on her Instagram Stories, adding, “I’m not perfect. I’m a work in progress. We all are. But we all are beautiful, even when we fall short of other people’s expectations. Beauty shown the best from the inside. Don’t let no one, man or woman, make you feel less or that you don’t deserve everything you have and pray for.”

Addressing her legal battle with the “Turn On the Lights” hitmaker, she continued her lengthy message, “War is not cute. I don’t wanna wake up to filings and lawsuits daily. Especially over an innocent child. I miss the peace I once had. But I also have to do what I have to do to defend myself and my children. In America. We need to get over this culture of us women accepting abuse in silence. Because you are a woman or have less fame, power and money, you should shut up. We are strong than we know.”