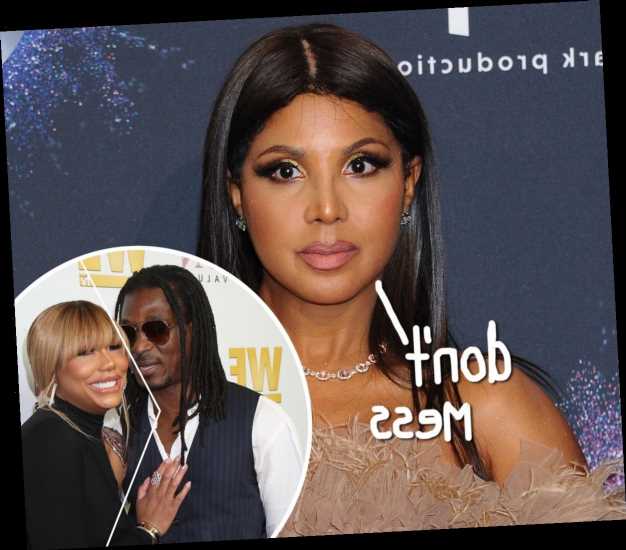 Well, this is an insult we don’t hear every day!

Toni Braxton has launched a public attack on her sister Tamar Braxton‘s ex-boyfriend, David Adefeso, and she’s not messing around with her choice of words!!

As you’ll recall, the Braxton family was first concerned back in July about the relationship when the WEtv star was notified Adefeso was releasing public statements about her medical state without her consent. This came after Tamar checked into a treatment center following a reported attempt on her own life. From what we can gather, the couple stayed together for about two months after the incident before calling it quits.

Well on Monday, the 53-year-old Un-Break My Heart singer shared a screenshot from the Notes app to her Instagram account, savagely calling out her younger sister’s ex:

You are beyond contempt.

Once again, DO NOT include my children in your SHENANIGANS.

Sis Towanda Braxton also chimed in, commenting on the post:

Take a look at some of the other top messages (below) left by fans on Toni’s fierce IG:

“Hold up, Living Legend!! I might have to get involved! He better leave YOU alone.”

“It’s the weasel and Ferret for me”

“You know you pissed her off I’ve never seen her post anything like this. He definitely must’ve pushed all her buttons”

“She said what she said ferret”

We haven’t received many additional updates since Adefeso filed a restraining order against the Braxton Family Values star on the grounds of alleged domestic violence. Towanda did shed a bit more light on the situation in an Instagram Live video (watch it HERE) on Monday, sharing with her fans:

“Toni is okay. She’s just really pissed off at David, as we all are. We don’t appreciate or condone the way that he is handling the situation. It’s even deeper than you guys can image. You guys only know the surface of it.”

Interesting! So what else is going on?? Unfortunately, it seems we’ll have to keep waiting for a while longer because Towanda didn’t expand much on what happened:

“For Toni to even say something and post it on social media, because you know she never does anything like that. You know he has gone way too far. And like she said you don’t involve the children. We don’t care what happens or how we may disagree or agree to disagree, you never involve the children and David went over the line when it comes to that.”

The 47-year-old stood by her comment on Toni’s IG, hurling the same insult his way again:

“My words are that I believe he is a loser boy. And if I’m calling somebody a loser boy, I mean it.”

David has yet to comment on the situation, but we have a feeling it won’t be long before he does!