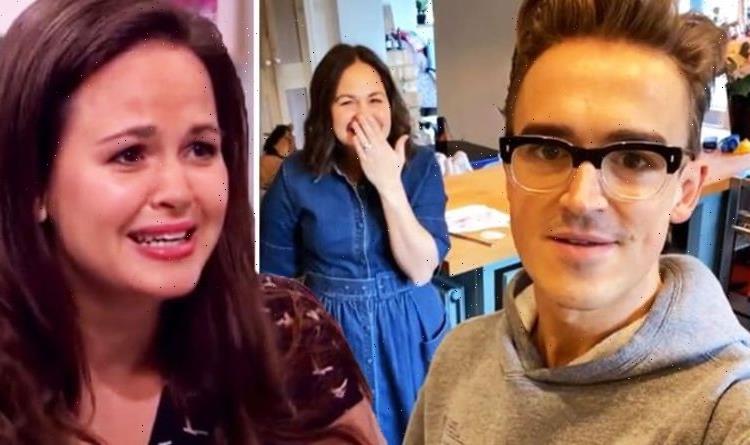 Strictly: Tom tells wife off for revealing his dance this week

Tom Fletcher’s wife Giovanna Fletcher has apologised for revealing a Strictly Come Dancing spoiler during an appearance on Zoe Ball’s BBC Radio 2 Breakfast Show this morning. Appearing on her husband’s Instagram Stories, Giovanna apologised for revealing that Tom and his dance partner Amy Dowden are set to perform the Viennese Waltz this week, before Tom said that he had been planning to reveal the dance to his fans later today.

I’m so sorry, I’m so proud of you, I just like talking about you

When asked if she enjoys watching her husband from the sidelines, Giovanna admitted that it could be a “stressful” experience at times.

She told Zoe Ball: “I absolutely love it, I love seeing him immerse himself in the experience, love learning each dance.

“The beginning of each week is a bit hairy, it’s quite stressful, it’s a completely new technique.”

Giovanan explained: “It’s a clean slate, whatever you’ve done before, your successes from the weekend, they’re no longer there.”

The mother-of-three went on to reveal the dance that Tom and Amy are set to perform this week.

“So now it’s the Viennese Waltz for him, it’s a very different pace to the Paso Doble, but it was incredible watching him,” Giovanna said.

The author went on to brand Amy a “pure delight”, before Zoe wished her husband good luck with the dance.

The Radio DJ said: “I’m really glad they’ve had their moment, it’s like every contestant has had a moment and that’s really good, it’s not just the same people at the top.

“No one’s listening, it’s fine Giovanna, it’s fine,” Zoe replied, before going on to speak to the star about her time on I’m A Celebrity… Get Me Out Of Here! last year.

Following the slip-up, Giovanna appeared on Tom’s Instagram Stories to apologise to his two million followers for the Strictly spoiler.

Standing in their kitchen, the McFly star looked less than impressed as he quizzed his wife on her slip-up.

“What did you just do?” asked a sombre looking Tom.

“I might have said what dance you’re doing this week on Radio 2,” Giovanna replied, before she burst into laughter.

Not finding it funny, Tom said: “I meant to announce it tonight,” he went on, before his wife cut him off.

“I’m so sorry, I’m so proud of you, I just like talking about you,” Giovanna gushed.

“You just wanted to steal some Strictly spoilers for yourself didn’t you, huh?” Tom asked his wife.

“Yeah, I just wanted some attention,” Giovanna joked before the video ended.

Strictly Come Dancing continues on Saturday at 6.40pm on BBC One.