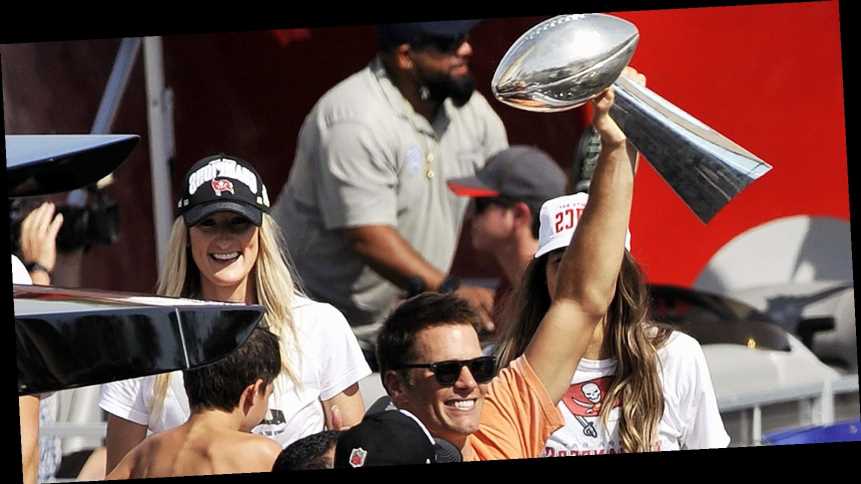 Boating and boozing! Tom Brady showed off his arm strength by throwing the Vince Lombardi Trophy from one boat to another while celebrating the Tampa Bay Buccaneers’ Super Bowl win.

The quarterback, 43, appeared to be letting off some steam as he partied with his teammates in a boat parade on Wednesday, February 10, in Tampa, Florida, following their victory in Super Bowl LV on Sunday, February 7.

Brady shared a video of himself on the back of one vessel holding onto the coveted trophy before launching it to players on a boat behind him. Tight end Cameron Brate caught the hardware with ease before raising over his head and cheering with excitement.

“You can hear Vivi yelling, ‘Dad, NOOOO,’” the athlete captioned the clip via his Instagram Story, referencing his daughter Vivian, 8, screaming in the background. “Another clutch catch by @Cambamgram.”

The video also showed Brady standing with his 13-year-old son, John, who puts his hands on his head after seeing his dad’s scary throw.

The former New England Patriots quarterback, who shares Vivian and Benjamin, 11, with wife Gisele Bündchen, and John with ex-girlfriend Bridget Moynahan, posted a second video on his Instagram, highlighting the day’s events and some of Super Bowl LV’s best plays.

The clip, which he simply captioned, “W,” started with Brady holding the iconic trophy while standing beside teammates Blaine Gabbert and Ryan Griffin on Wednesday. Eminem’s “Without Me” played in the background as the California native posed with the trophy while driving through the city on a yacht.

“Ya, we’re coming back!” Brady said in the video, which featured snippets of Sunday’s game and the trophy ceremony. “I think we knew this was going to happen tonight, didn’t we?”

The TB12 Sports cofounder also poked fun at his day of drinking by reposting a video of himself being escorted through a crowd when leaving the boat parade.

Three days prior, Brady won his seventh Super Bowl, having taken home six trophies with the Patriots ahead of Tampa Bay’s championship over the Kansas City Chiefs.

Sunday’s game marked his 10th Super Bowl appearance, which is the most of any NFL player. He is also the oldest quarterback to win the Vince Lombardi Trophy at the age of 43. He previously earned the title when he won the 2019 Super Bowl at age 41.

The Bucs played in their home stadium, which is another NFL first, making the win that much sweeter. The MVP recipient was spotted hugging and kissing his three kids on the field after the game, as well as his wife, 40.

Tom Brady and Rob Gronkowski’s Bromance Through The Years

The following day, the Brazil native gushed over her husband’s achievements on the field, writing, “Congratulations my love! Over the years I have seen you overcome so much adversity, physically and emotionally. I can for sure say you are the most dedicated, focused and mentally tough person I have ever meet.”

She also shared a series of photos from Super Bowl LV on her Instagram, adding, “I am so proud of the man you are and I am so happy to see the smile on your face every time you get to go out there and throw that ball. Now, we are so happy that we get to have you home for a little while (well, at least until next season ?) You have earned all your success! Te amo❤️.”