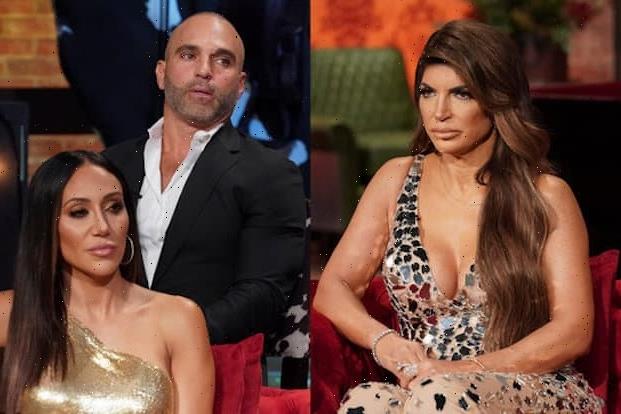 Bravo has unveiled the trailer for The Real Housewives of New Jersey’s upcoming 12th season reunion … and you may wanna be sitting down for this.

Or perhaps standing up and cheering.

One or the other, really.

In ourr very first look at the upcoming special, Teresa Giudice appears to be at the center of almost all the most intense moments, which should come as no surprise after she’s spent the past few episodes feuding with her co-stars.

At one point, she trashed Margaret Josephs as a disgusting white trash bitch.

In the case of the reunion, however, before stepping foot on the stage, the 49-year-old gets into a heated exchange with her brother, Joe Gorga.

The siblings’ argument stems from the fact that Joe hasn’t defended Teresa’s fiancé, Luis Ruelas, despite Josephs and her husband, Joe Benigno, continuously raising questions about the character of the man Teresa plans to marry.

“I wish you would f—ing tell Margaret to shut the f— up,” Teresa screams at Joe as Margaret’s husband stands nearby and watches.

“This f—er and his wife talking about my f— boyfriend.”

“You should be f—ing slapping [Margaret’s husband] upside of his f—ing head,” she adds, which prompts Joe to walk out of the room.

But the drama doesn’t end there.

“You know what?” Joe later says. “Be a sister for once in a while, you f—ing moron.”

When Teresa eventually confronts Margaret herself, the pair apparently go back and forth over who “ruined” the group’s night out in Nashville, which is a reference to the time Giudice made the aforementioned white trash comment before throwing plates and drinks at Josephs.

After allegations about Ruelas surface in thiis preview, Margaret claims he “lied on camera.”

Teresa, in turn, tells her castmate to “shut up.”

Teresa also gets into it with sister-in-law Melissa Gorga.

After the mother  of four explains why Melissa won’t be a bridesmaid at her upcoming wedding, Gorga fires back:

“You remember whose been here through all your sh-t.

Finally, the growing tension between Teresa’s family take a turn for the worse and potentially life-altering when she calls her brother a “bitch boy” on stage.

After telling Teresa to stop “‘putting me down,” Joe walks off and says:

Aside from all of THIS chaos, Jennifer Aydin will have new information on the state of her marriage to Dr. Bill Aydin; while Jackie Goldschneider will get emotional while discussing her road to recovery.