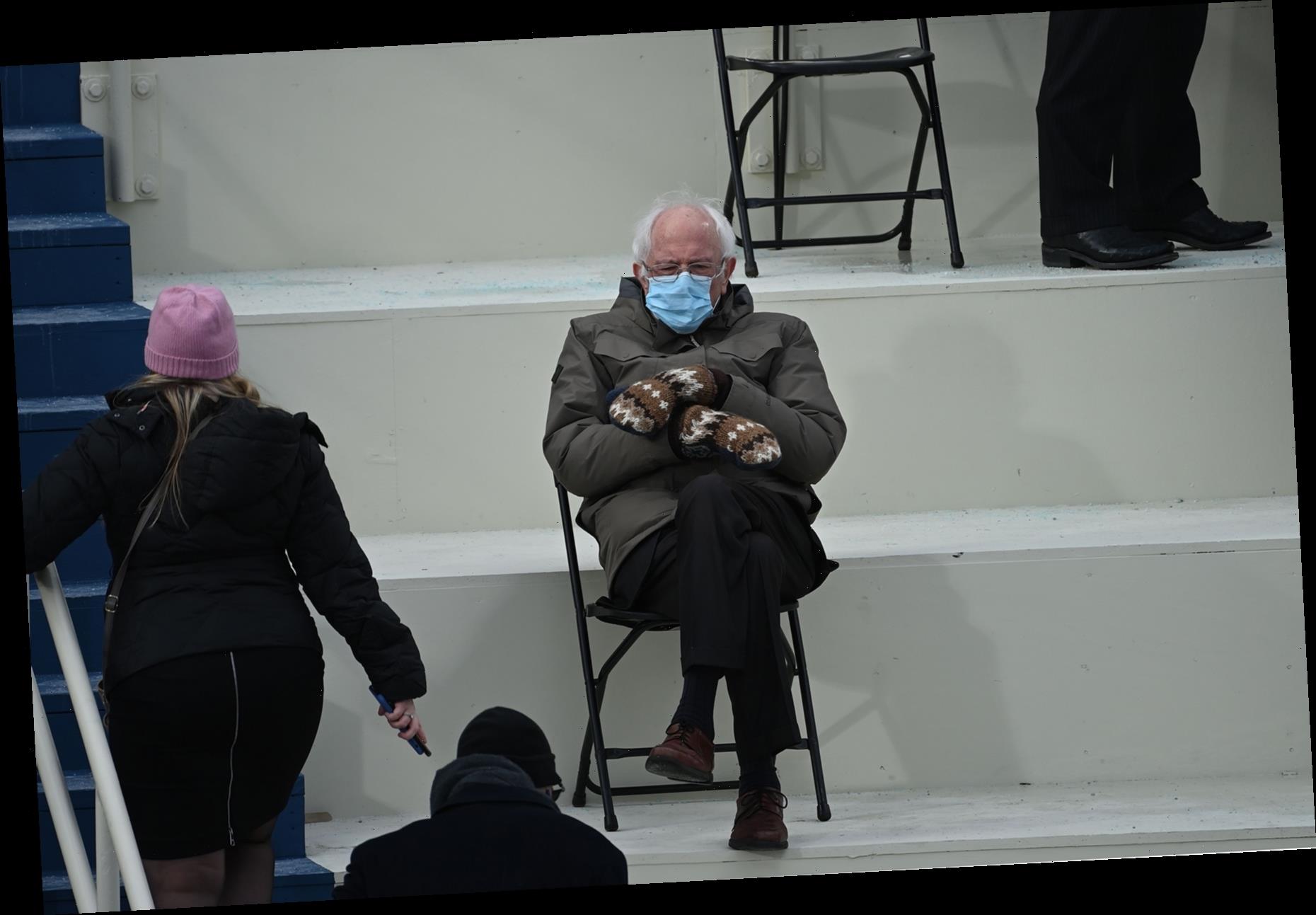 Two weeks before the inauguration, Brendan Smialowski, a former sports photojournalist from Connecticut who documents politics for wire service Agence France-Presse, had been inside the Capitol, capturing senators voting on the 2020 election certification, when a mob of Trump supporters stormed the building. On Wednesday, Smialowski was in the cold outside of the Capitol, documenting the celebration of a new administration for President Joe Biden.

With his eyes open for Senators Ted Cruz and Josh Hawley, Smialowski noticed Senator Bernie Sanders taking a socially distanced seat. The photo instantly became the biggest meme of the inauguration, as amateurs and pros alike inserted Sanders’ pose into classic paintings, movie stills, album covers, historical photos and other memes. His pose was also perfect fodder for reaction memes to convey annoyance at everything from unnecessary meetings to four-band concert bills.

“He’s very big. He’s a heavy hitter during the primaries. His brand of politics is popular,” says Smialowski. “So, of course, I want to keep an eye on him and how he interacts with people and try to make a nice picture.”

The rest is history.

What was your first thought when you saw how the photo came out?
The picture itself is not that nice. It’s not a great composition. I’m not going to be putting this in a portfolio.

How many photos of him did you take in that moment? How long were you looking at him?
This exact moment, I took two photos. It’s funny because the second one — for me — I thought was better. But I sent the first one because the moment — his posture, his pose — is a little better. But the composition was garbage. It was messy, but it was a better moment. I always say that in photojournalism, composition comes second to content. And content is the moment. Make it look pretty after. If I can’t put it together in a way that looks really good, with every piece of the picture adding, that’s okay. It’s more important to get the moment and then keep shooting if you can make it better.

In this case, the moment was pretty, pretty quick. So there was no shooting after. I’d been watching him prior to that and I had taken photos of him before, wandering in and walking around. I was shooting a little looser because it does get very interesting. You have all these heads and bodies moving around in a weird “Where’s Waldo?” type of way. But when I took this picture, my camera was on somebody else because I was keeping an eye on [Senators Ted] Cruz and [Josh] Hawley.

So your focus was on them?
These guys are pretty important right now to the story; things that have happened in the past few weeks. This was kind of where my priority was. But when I shoot, I like both eyes open. So you keep one eye looking through the camera so that you have heavy magnification on it. And that’s obviously the picture you would be taking. But you keep the other eye open so you can see what’s happening around you and you can see the other things. You don’t want to get tunnel vision. So I’m watching with my other eye. And I kind of saw [Sanders] taking a seat and fiddling a little bit. And that’s when I moved over pretty quick to take that picture.

Judging from the photo, Bernie appeared to look a little grumpy or bored-looking. Was that his vibe or was it a glance at a moment?
So this actually gets into a type of photo that I’m not a big fan of, which is freezing a very specific moment in time, that gives kind of a misconception. I do not like this type of photo and I do not try to take it. I think it’s fair to say that the next second, he was a different photo. But I think the feeling of it is accurate and fair. I guess composition-wise and the actual every little part of where his hands are and his legs are is a little different. But this was what I thought was the best and it worked enough.

I wasn’t going to linger on it too much because there was a lot to do that day. It’s not all about Bernie. He wasn’t just sitting alone all the time … He was certainly talking to people. You can say that Senator Sanders is politically independent and I think he’s probably personally independent, too. I think he’s probably perfectly comfortable coming out there, sitting alone, holding his papers and then going back in to do the rest of his day.

When you took that picture, did you anticipate it being such a thing?
No. Obviously, I thought it was a nice moment and I took it. It was a good slice of life. It’s the type of thing that I like. It’s my subject being who they are, which is nice. That makes doing my job a little easier.

I think if you could predict it, you’d probably have a billion dollars.
If I could know, I would never take a meme. I would be more than happy to never have a meme.

Can you speak to why you think that specific image did become such a meme-able image and why it captured people’s imaginations?
I’m probably not qualified to talk about that because I think it gets into questions of sociology and psychology that I definitely have no education in. But one thing that I’m comfortable saying is that Senator Sanders is a very well-defined image and brand of politics. I think this photo is a nice moment. I definitely stand by that. But it trades on who he is. If this was a picture of anybody else and everything’s the same, I don’t think it would be what it is today.

Did you like any of the resulting memes?
I genuinely enjoy when people do Photoshop jobs putting things into art and making it look like it actually belongs. Matching the texture and the tonality shows a certain level of talent. It can be pretty funny, depending on what piece of art they pick and why it speaks. I probably think how people put memes together in general speaks a lot about them.

Did you see that the Bernie people put out the image on a sweatshirt? Do you think you’ll get one of those?
We’ve got a policy in my house. You bring a piece of anything in like a piece of clothes, one’s got to go out. I like all my clothes right now. They keep me warm. And I can’t think of what sweatshirt I’d throw out if I brought a new one in.

What about if someone sent you a pair of those mittens?
Those mittens look pretty good. I’m going to be honest. The irony of photography is, it’s always a split second. But the amount of time that you invest to record that split second is a lot; and a lot of the time, especially for a photojournalist, is done out in the cold. It’s important for your fingers to work and for your hands to be warm. They looked like good mittens.

So you liked the mittens?
Particularly on that day, I might have been a little jealous.