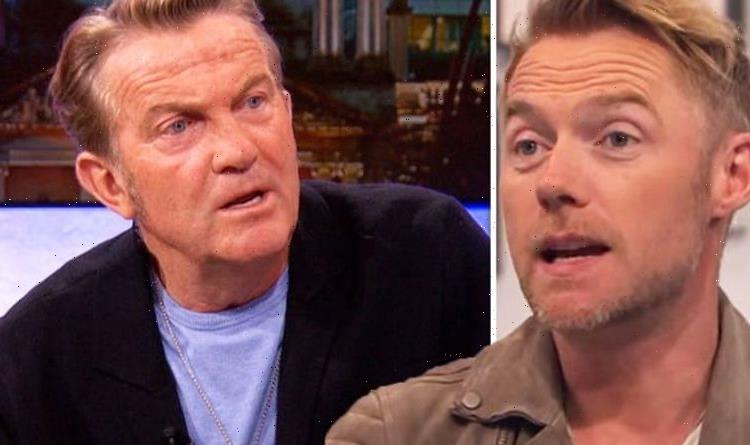 The One Show: Bradley Walsh teased by Ronan about hosting

The One Show’s Ronan Keating hit back at Bradley Walsh this evening after the star interrupted his segment with Paralympian Kadeena Cox to make a joke about the Queen. Speaking to the Beat The Chasers host, 61, on the BBC magazine show, Ronan quickly cut in and asked the TV star if he wanted to take over presenting responsibilities on the programme, seeing as he was taking the lead when he came to interviewing their sporting guest.

Do you want to host The One Show as well?

Speaking about receiving The Queen’s Baton from her majesty, Kadeena admitted that it was a proud moment for her.

Talking to hosts Ronan and Rylan Clark-Neal, she said: “I felt really special when I got that phone call and it lived up to the expectation.”

Already sitting on the green sofa, Bradley looked antsy before cutting in to put a pressing question to the athlete.

“Can I just ask you, because I’m interested in – sorry gentlemen,” he said to Rylan and Ronan.

Bradley continued: “I’m interested in the Queen passing the baton to you, what pace was she doing when she actually passed the baton?

“I really want to say, ‘hand’,” Kadeena joked, going along with the star.

Bradley added: “Was she going, ‘Kadeena, Kadeena get your hand ready’,” he said, before going on to do an impression of the royal.

“Kadeena get your hand ready, Kadeeena” Bradley said in a high-pitched voice.

As the Olympian fell about laughing, Bradley explained: “I just wanted to know that.

With Ronan and Rylan joining in on the joke, Bradley continued: “She’s running with her crown on her head, one hand on the crown”, he added before doing another impression of the monarch.

Cutting in, Ronan asked his guest: “Do you want to host The One Show as well?”

“All I want to say, Ro, is bang goes my MBE,” the TV personality said as the studio erupted with laughter.

“You’re out! Rylan quipped, before adding, “we’re all out”.

The Watford native is set to star in the reboot of The Darling Buds of May, called The Larkins.

The series follows the working-class Larkin family who live in the Kent countryside with their six children.

Appearing as Pa Larkin, Bradley will star alongside Joanna Scanlan and Sabrina Bartlett as well as a whole host of other famous faces.

Following his appearance on the show, The One Show viewers took to social media to air their thoughts about Bradley sitting on the green sofa.

While Jay Harris penned: “Bradley Walsh is a national treasure.”

The One Show is on weekdays at 7pm on BBC One.