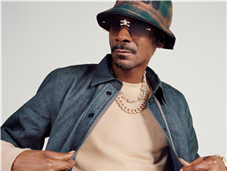 Denim brand G-Star RAW is throwing it back to the Nineties this season with some help from an icon of the era: Snoop Dogg.

After launching the “Say It Witcha Booty” campaign last fall, Snoop and G-Star are reviving their partnership for, as the duo puts it, the next episode. This season’s collection of “Hardcore Denim” brings logo tees, hats, and denim pieces — all inspired by Nineties G-funk, or the “golden age” of casual denim. As the Dogfather of Nineties G-funk, Snoop is a clear fit for the new collection, with G-Star calling him their “true hero of the era.”

To shop the new Snoop-approved pieces, head to G-Star.com now, where prices start at $45.

RS Recommends: This Top-Rated Sonos Dupe Is On Sale for Just $49

5 Festivals That Ended in Disaster

Last fall, Snoop Dogg and G-Star began the “Say It Witcha Booty” campaign, which saw the rapper creating a custom version of his track by the same name. The song can be heard over the campaign’s vibe-y video, which shows Snoop enjoying a world of “denim booties” that show off G-Star jeans’ flattering fits.

According to G-Star CMO Gwenda Van Vliet, Snoop was an active creative force in the campaign video, besides being its star. “Snoop was very much involved in the creative and outspoken about what he likes and what he doesn’t,” she tells Rolling Stone.

But, per Van Vliet, the Compton rapper’s personal style also played a role in the creation of G-Star’s new pieces. “We have been drawing inspiration from Snoop’s unique sense of style and the G-Star archives, fusing craftsmanship and street level edge,” she says. This West Coast-meets-retro European style (a lá vintage G-Star), certainly comes through in the new collection. Muted colorways and crisp, premium denim can be found on jeans, jackets, shorts, and shirts, and many of the pieces can be seen modeled by Snoop in the “Say It Witcha Booty” campaign video.

Van Vliet says G-Star was initially drawn to Snoop as a collaborator because he “is always staying ahead, reinventing himself and he dares to cross genres. Bringing different worlds together is something that is true to us, and to Snoop.”

Snoop, meantime, shares Van Vliet’s outlook on his partnership with G-Star, saying “I’m teaming up with G-Star because we are both pushing the field, staying ahead, cutting the edge. We are both masters of our craft – leading the game. You know what I’m saying? We look ahead.”

The “next episode” of Hardcore Denim with Snoop Dogg is live now at G-Star.com. Pieces are unisex and inclusively sized between XS to XXL, with prices starting at $45 for T-shirts, hats, and tote bags.