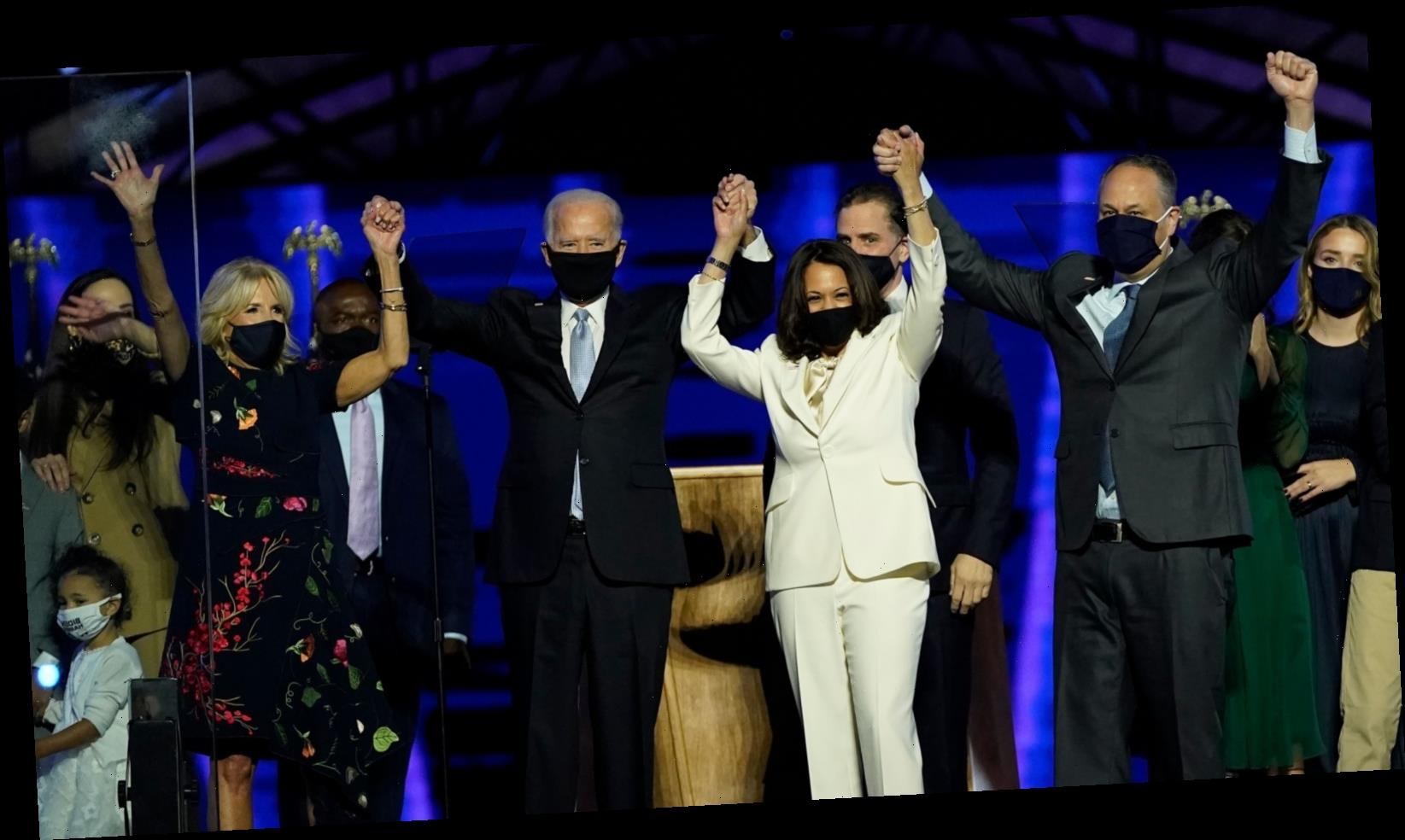 It was a night that President-elect Joe Biden and his family (which now include honorary Bidens Vice President-elect Kamala Harris, her husband Doug Emhoff, and her stepchildren) aren’t likely to forget for a long time. The victory celebration began in an uncharacteristic way, with Harris stepping up first, to thank the voters, campaign workers, and poll workers. She then acknowledged her own historic rise to power, saying, “While I may be the first woman in this office, I will not be the last, because every little girl watching tonight sees that this is a country of possibilities.”

Biden used his speech to reach out to those who didn’t vote for him, saying, “I understand the disappointment tonight. I’ve lost a couple of times myself. But now, let’s give each other a chance” (via CNN). After 48 years in public service, Biden saw his name light up the sky with fireworks along with the words “President-Elect” and “46.”

But the evening wasn’t just about the big moments — they were about the small, joyful ones as well. Here are just a few of them.

Joe Biden's jog out to the podium

After Kamala Harris introduced her running mate, President-elect Joe Biden made his way to the podium in a happy jog, which social media users embraced — some called it the “Joe Jog” (via Just Jared), while another referred to it as “Joe Biden’s cute little grandpa jog.” Another Twitter user said, “I love Twitter because this is the only place I can come and find people putting old WWE entrance music with Joe Biden’s light jog down the runway towards the podium.”

And while Biden didn’t mention his predecessor by name, it fell to Twitter to compare the jog and the President-elect’s state of health with that of President Donald Trump’s. “LOL @realDonaldTrump should release his medical records but he won’t as if you compare Biden’s health to Trumps you will see how much more fit Joe is than Donald. Never have seen Trump jog or exercise like Joe does. Trump is not fit enough to jog with Biden.”

There were tributes to the late Beau Biden

When the 2020 Democratic National Convention took place in August, the event featured a clip of Joe Biden’s late son Beau, who introduced his father at the 2008 Democratic National Convention. Then, Joe Biden shared the clip on Twitter, saying, “Beau is with me every single day. If he was here tonight, he would remind me ‘just be who you are.’ I’m a better person because of him.”

Beau Biden was at his father and friend Kamala Harris’ big night, too. Harris first paid tribute to Beau, saying, “While I first knew Joe as vice president, I really got to know him as the father who loved Beau, my dear friend, who we remember here today” (via The Independent). Biden himself referenced Beau in the closing words of his victory speech, when he said, “Folks, the last days of the campaign, I began thinking about a hymn that means a lot to me and my family, particularly my deceased son, Beau. It captures the faith that sustains me, and which I believe sustains America. And I hope — and I hope it can provide some comfort and solace to the 230,000 Americans who’ve lost a loved one to this terrible virus this year. My heart goes out to each and every one of you. Hopefully, this hymn gives you solace as well” before quoting the refrain of the Catholic hymn “On Eagle’s Wings” (via The Washington Post).

But it was the subtle  tribute to Beau during the fireworks after the speech that really had people tearing up.

The playlist from the fireworks celebration that marked the end of Biden’s Victory celebration sparked a social media exchange, too. Writer Olivia Nuzzi tweeted: “”If you love Coldplay, Hall & Oates, Tina Turner, you love that fireworks show — as I did. I love that music.” — @wolfblitzer,” to which CNN’s Wolf Blitzer replied: “Thanks @Olivianuzzi for letting everyone know this is my kind of music. ‘Simply The Best.'”

The playlist was an eclectic collection that included “Higher Love” by Kygo, Tom Petty’s “I Won’t Back Down,” Coldplay’s “A Sky Full of Stars,” Hall and Oates “You Make My Dreams,” and finally Tina Turner’s “Simply the Best,” the last three songs which were set to a drone-and-fireworks display (via Drone DJ). Once again, the Coldplay choice was said to be a tribute to Beau, who loved the song (via Twitter).