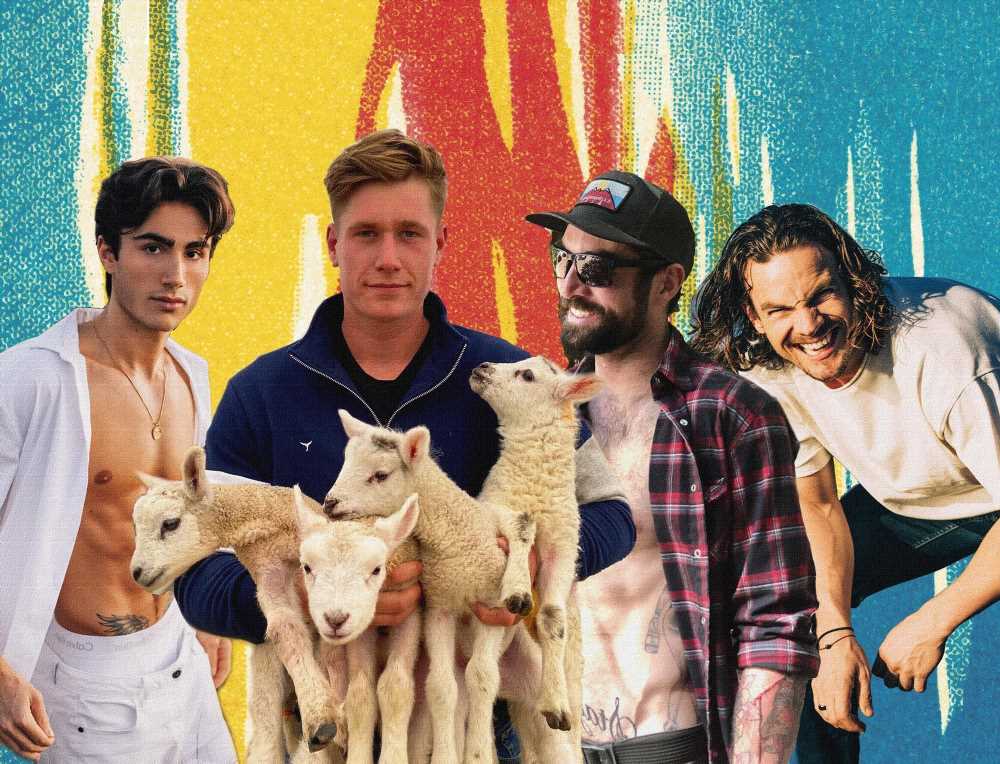 TikTok has ushered in a bimbo renaissance, where self-aware babes can unabashedly strut across the For You Page. Now enter: Himbos — internet hunks willing to go shirtless in the name of freedom (or something). We asked four such gentlemen how they were enjoying this newfound visibility, and how best to join the movement.

On TikTok, he’s a sweet, innocent English farmer who uses his platform to show off his hard-working day job. But does Farmer Will, 22, know what those shirtless videos dancing with baby lambs are doing to his 860,000 followers? Well, yes.

Are there types of videos that get more thirsty comments than others?

Ready to Eat for Free? Find Your Own Food

All 206 of Taylor Swift's Songs, Ranked

RS Recommends: 5 Devices You Need to Set Up Your Smart Home

Do you feel like you encourage that or is it accidental?

I would say it’s probably accidental! With my TikTok, the main aim for me is education—I want people to learn about the farm, learn about things that I do. And if I can do that in a fun, interactive way, then great.

Are you ever recognized in real life?

Yeah, if I go out socializing, I won’t get called by name but people will say “TikTok farmer” or “the sheep guy” and things like that.

Do your friends ever give you shit about it?

You know what? I’m quite surprised they let me get on with it, because our friendship group is a bit like that. But I don’t get too much grief from them, to be honest.

What do you think of being called a himbo?

It’s been explained to me as an attractive guy who does a job that’s physical, right? There’s two ways I look at it, where I’m a hard worker and really committed to the job, and it’s nice being told you’re a good looking chap doing it. But also, I think everyone would be good-looking next to a lovely, cute animal, you know?

A self-described “blue-collar guy,” Gaglione acknowledges that his shirtless videos, in which he feigns disapproval at his openly thirsty followers over a soundtrack of moody covers, are probably just egging them on.

How did you start out on TikTok?

I made an account out of pure boredom, and eventually I started making TikToks. They weren’t thirst traps or anything, just goofy videos in the morning where I’d slurp coffee with funky sunglasses on. Then one day I made a random video with no shirt on and gray sweatpants and it blew up—it went pretty viral—and I thought, “Maybe I’ve found my niche finally.”

How did you respond to those early thirsty comments?

I couldn’t believe how raunchy women were. It was eye-opening, really. I always thought I was just a super average guy, you know, never really got much attention out in public or anything, and it felt kind of nice that people were going out of their way to say these disgusting things to me.

Is there a particular comment that you think about a lot?

The Barbie one. “Let’s play Barbies. You be Ken, and I’ll be the box you come in.”

What do you think about being a “himbo?”

I embrace it. I just think it’s funny, if anything. I definitely never thought that’s where my life was going to go.

Cook may be an actor IRL (Chilling Adventures of Sabrina, Dollface), but on TikTok, he’s a zany Australian pop-culture critic, just trying to field the barrage of appreciative comments with grace and humility.

What does “himbo” mean to you?

I’ve never heard the word until you just said it.

Himbo. Himbo. It sounds pejorative, but I don’t take it as pejorative. If you mean an attractive, self-aware, self-deprecating guy on TikTok who doesn’t make those horrific thirst traps, then I’m happy to fall into that category.

Do you think TikTok is a positive thing?

Absolutely. I think TikTok, frankly, just puts Instagram to shame. It doesn’t matter what walk of life you’re from, doesn’t matter if you’re famous or not, we’re all trying to make each other laugh. What better thing is there than that?

Though some of the people in your comment section say some pretty thirsty things to you.

Oh my gracious, yeah. You wouldn’t believe it. And honestly, I encourage the creativity in it. If it’s a beautiful mix of crass, disgusting, and creative, I’ll pin the comment.

What kind of comment is the pinnacle of all of those things?

Oh goodness. There’s this one particular guy who comments on there, and he once said, “You’re the Lord of my Ring, daddy.” Now, that is disgusting but I love it so much. And on another video, I wasn’t wearing many clothes, and he writes, “Smuggling a porpoise in there.” [Laughs.] Like, my penis is the porpoise? Amazing.

Vicchiollo, an early adopter of TikTok, insists he “didn’t grow up as an attractive person.” He now stands as a proud representative of himbokind.

How do you define “himbo?”

To understand himbo, you have to understand “bimbo” and how that paved the way. Bimbos are people who feel so comfortable in their sexiness, in their bodies, in themselves and their confidence, that they know deep down what their self-worth is and they use it to their advantage. That’s exactly what a himbo is. I feel like no matter what I post, I can feel confident. Comments—be they positive affirmations or people trying to tear me down—don’t give me a reaction anymore, because I am so secure in myself that it doesn’t matter what other people think.

The middle path. So you recognize the good that can come from himboism?

I honestly love the concept of being a himbo. Before TikTok, I was oblivious to my attractiveness, but now I obviously know what I do to people on the internet, and that’s why I feel like I can make funny videos. The last thing that you want to do is make people think that you know that you’re attractive. You want to look oblivious, but know the power that you have behind it. I never mention my attractiveness, but I know that if I post a video with my shirt off or I do a certain angle so my jawline looks better, that it will add to, I guess, the himboism.

You made a video where you came out publicly as bisexual. Who leaves filthier comments—the girls, the gays, or the theys?

Definitely the gays and the theys. But this one girl did get me. She goes, “Hey, I’m the chick who comments ‘daddy’ on all your TikToks. I didn’t know the context of why you were in the hospital in the video you posted, but I hope you’re okay.”

Interviews were edited for length and clarity.