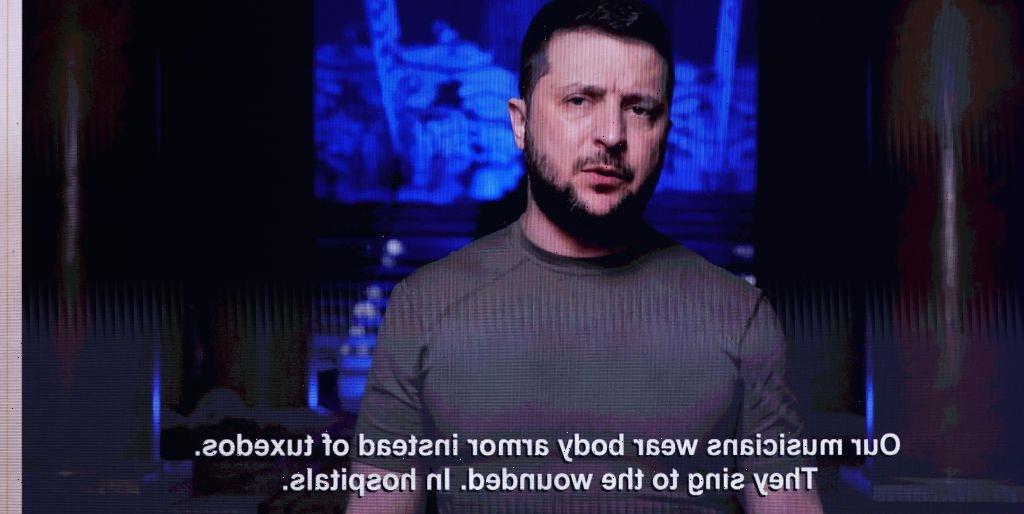 Hundreds of rich and famous people crowded the MGM Grand Garden Arena for music’s biggest night, but the 2022 Grammys’ highest-profile guest may very well have been Ukrainian president Volodymyr Zelenskyy. Zelenskyy beamed into the ceremony before a performance of John Legend’s new anthem “Free,” delivering a touching message about the importance of music in impossible times.

“Our musicians wear body armor instead of tuxedos,” Zelenskyy said. “They sing to the wounded in hospitals, even to those who can’t hear them. But the music will break through anyway. We defend our freedom to live, to love, to sound.”

Here is Ukrainian President Volodymyr Zelenskyy’s pre-taped speech at the #Grammys, introducing a performance for Ukraine from John Legend: “Our musicians wear body armor instead of tuxedos. They sing to the wounded in hospitals.” https://t.co/rjX2S54hkr pic.twitter.com/43fcZTrjQK

Zelenskyy’s video was reportedly filmed from a secure Kyiv bunker within the last 48 hours, as Russian troops continued their assault on Ukraine. His speech teed into “Free,” which featured Legend on the piano accompanied by three Ukrainian performers: Mika Newton on vocals, Siuzanna Iglidan on bandura (a Ukrainian folk instrument), and Lyuba Yakimchuk delivering spoken word poetry.

Zelenskyy’s speech comes on the heels of an almost-but-not-quite appearance at last week’s Oscars, when Sean Penn made headlines by telling reporters that he’d smelt his Oscar statues if the Academy didn’t invite Zelenskyy to speak. Oscars cohost Wanda Sykes took a different take, saying of Zelenskyy, “I think he’s very busy right now. Hollywood, we can get a little full of ourselves, and we think that what we’re doing is all so important. And I understand that yeah, what we do, it reaches a lot of people. And we can persuade people, but also, just know your lane. You know what I’m saying? Know your lane.”

Here is Zelenskyy’s speech, in full: