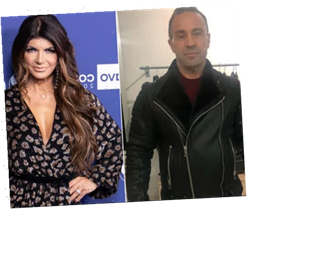 For many months after his split from Teresa Giudice, Joe Giudice made it clear that he still hungered for his ex-wife.

In a sexual and romantic sense, that is.

Now, however, close to a year after the couple went its separate ways, Joe is finallly being satiated by someone new — and Teresa could not be happier about it.

As previously reported, Joe Giudice is dating a lawyer.

We have a very reliable source who can back this claim up, too: Joe himself!

“She’s helping out a lot out here. It’s good because I have a lot going on out here and she’s putting together a lot of deals for me. We’ve been seeing each other…

“I wouldn’t say she’s my girlfriend, but we’re hanging out together.”

Well, fine. Joe has a f–k buddy apparently, not a girlfriend.

But an insider tells Hollywood Life that Joe at least having someone new in his life is very refreshing for her to learn.

“Teresa is really happy for Joe that he’s moving on with his life,” this source says, expounding a bit as follows:

“There’s no bad blood between them and she wants him to be able to live a happy life.”

They were apart for well over a year back when Teresa served time in prison for bankruptcy fraud and then Joe did the same and then Joe got deported because he committed a felony as a non-U.S. citizen.

Its enough to make your head spin, we know.

And it was enough for Teresa and Joe to finally pull the plug on their marriage this past December.

Joe has hinted here and there over the past several months that he’d love to jump back into bed with Teresa.

Conversely, Teresa has made it quite clear that she’s ready to move on.

“They still talk daily and it’s always about the girls,” the above source says of Joe and Teresa.

“Their marriage was over for quite some time, so it’s not a total shock to her that he’s dating. The girls are OK with it as well and they’re happy their dad can spend time with someone.”

Teresa has also been linked with Anthony Delorenzo for quite some time, although she’s never confirmed that the two are in a relationship.

“She is having fun and going out and she’ll absolutely talk to a guy, but she’s not seeing any one person in particular,” Hollywood Life reports.

“Joe also knows she’s going to be dating and they really just want the other to be happy.

“The girls want to see their mom happy, too.”