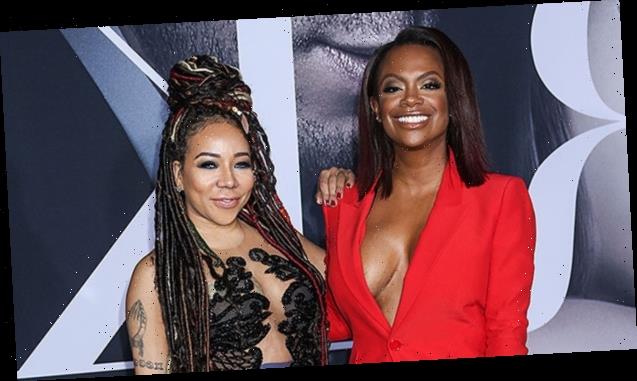 Tiny admitted she would ‘do some episodes’ of ‘Real Housewives Of Atlanta’ with her Xscape ‘sister’ Kandi Burruss — but being full-time isn’t in the cards for her.

Fans have been wondering if Tameka ‘Tiny’ Harris, 45, would ever join Real Housewives of Atlanta alongside Kandi Burruss, 44 — but she confessed she would “never” consider doing the series full-time. “I would never do that and be a ‘wife on there but I would definitely do some episodes. I have some friends on there,” Tiny confirmed in an EXCLUSIVE new interview on HollywoodLife‘s TVTalk. “One of my sisters is on there — Kandi, so I would always go on there if she needs me or wants me to come on, I would definitely appear on there,” she added.

Tiny and Kandi go way back to the ’90s when they formed girl group Xscape with sisters LaTocha and Tamika Scott, and have a number of hits with including 1998’s “My Little Secret”! Despite being close with BFF Kandi, Tiny explained why she wouldn’t be interested in adding another reality show to her busy schedule. “I’ve been an executive producer for all my shows. My name has been in the title and I just don’t want to do anything else unless I’m doing a movie or something as far as show wise,” she said, referencing her successful series T.I. & Tiny: The Family Hustle, with husband T.I., 39, and their blended family, including pregnant daughter Zonnique Pullins, 24.

“However, I do love the Housewives. It gives you all of the tea you really need. I’m interested in watching them, if anything. I ain’t got it in me,” the Atlanta native hilariously went on. “I’m friends with pretty much everybody on the Atlanta Housewives, so if they ever need me or want me to do something on there I’m sure that I can make that happen,” she added. Even as a “friend,” Tiny would be a welcome addition alongside Nene Leakes, Porsha Williams, Cynthia Bailey and Kenya Moore!

Plenty of change is in-store for Tiny, as she also prepares to become a grandmother. “It is slowly sinking in. It hasn’t fully sunk in but it’s making its way. I’m getting excited about the baby,” she said of Zonnique’s pregnancy. “I keep asking people questions about grandmothers and trying to get a feel for what it’s like and everybody keeps telling me you’re just so in love and you’re more in love with your grandkids then your own kids. I just don’t see how it’s possible but my mother told me that too and I’m just trying to figure out because she knows she was talking to her daughter when she said that,” she also said.

The Mix drops new episodes live Tuesdays on Foxsoul.tv or download the FoxSoul app to watch!