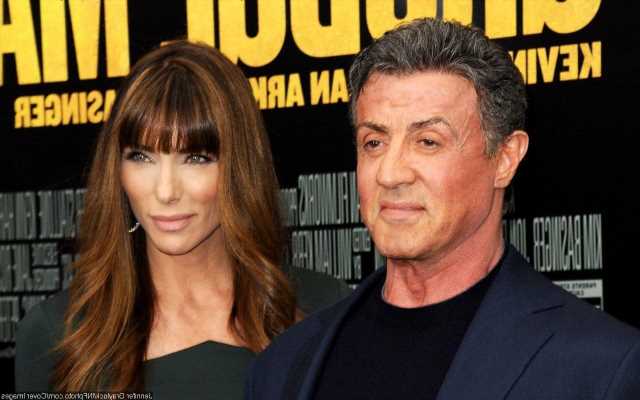 The ‘Expendables’ hunk and the former model are photographed having a tense moment during a casual outing in Beverly Hills after they got back together earlier this month.

AceShowbiz -Are Sylvester Stallone and Jennifer Flavin doing okay? “The Expendables” hunk and his wife were spotted having a public tense moment just weeks after they officially called off their divorce.

On Tuesday, October 25, the married couple was photographed out and about in Beverly Hills. When exiting a Rite Aid, they appeared to get into a heated argument as the 54-year-old beauty walked slightly ahead of her 76-year-old husband with a serious face.

In video obtained by Hollywood Pipeline, Sly looked dapper in a casual look. He donned a gray T-shirt which he paired with jeans. He also wore a pair of black sunglasses. In the meantime, Jennifer opted for a white top and jeans. She was seen carrying a $10.99 “Just for Men” hair coloring kit.

The duo is back together after Jennifer shockingly filed for divorce from her husband of 25 years back in August. Then earlier this month, a judge officially dismissed the proceedings after the couple filed a voluntary notice for dismissal in Palm Beach County, Florida.

In a statement, Sylvester’s representative said that the pair “decided to meet back up at home, where they talked and were able to work out their differences.” The spokesperson further noted, “They are both extremely happy.”

A few days later, the pair looked loved up when attending the Ralph Lauren SS23 Runway Show on October 13 in San Marino. When posing for photos, beaming Sly could be seen putting his arm around Jennifer. In a separate snapshot, the “Rocky Balboa” star and Jen were seen laughing happily with the former model hugging him from behind.

Following their brief separation, Sly and Jennifer were accused of staging their divorce for their family’s upcoming TV reality show. According to reports, they have been filming their very own reality show since August, the exact same month that Jennifer filed for divorce.

The reality show will be aired on Paramount+ and it is reported that the project is being made by the same production team behind “Keeping Up with the Kardashians“. Many believed that the TV show will be filled with the same kinds of ups, downs and made-for-TV moments that momager Kris Jenner and her daughters have become famous for.