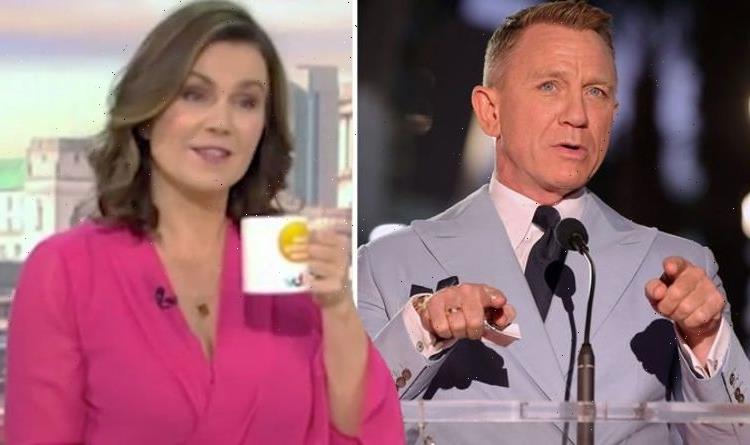 Susanna Reid and Ben Shephard this morning discussed Daniel Craig being honoured with a star on the Hollywood Walk of Fame in California yesterday, following his 14 years as the globe-trotting spy James Bond. Ben suggested that the 53-year-old appeared to be “shy” at big events, while Susanna brutally described him as “grumpy”.

Speaking on Good Morning Britain, the 46-year-old said: “Daniel Craig can be notoriously shy at sort of moments like this.

“In the past, when you interview him, he can be difficult.”

Susanna chimed in: “Is he shy or grumpy? Sometimes he can be a little grumpy.”

“Some people may interpret him as grumpy, some might suggest a little shy,” the father-of-two continued.

The 50-year-old added: “I tell you what though, when he was out on the red carpet for the premiere, he was in good spirits wasn’t he?” to which her co-star agreed.

In a previous chat with Richard Arnold on the show, Susanna said the actor could be a “little lour”.

The former replied: “He’s got form for being grumpy and perhaps not necessarily as enamoured by the franchise as he should be given the numbers he’s been crunching on it.”

Susanna interviewed Daniel back in 2015 about Spectre and his role as Bond.

During the chat, the pair laughed as they discussed him almost breaking Dave Bautista’s nose in a fight scene.

The actor said he was “mortified” by the moment and said the crew winced at the sound.

Daniel also asked the journalist if she thought he should continue his role as Bond, to which she said yes.

Yesterday, the Bond legend became the 2,704th celebrity to be honoured with a star on the Hollywood Walk of Fame.

He said to the crowd: “I never thought I would hear myself say this, but it’s an absolute honour to be walked all over in Hollywood.”

The No Time To Die film is Daniel’s last of the franchise after 14 years.

Speaking to Entertainment Weekly, he said he wasn’t giving up acting for good and hoped to have “other lovely jobs” in the future.

On what he’d miss about playing the character, he said: “I’ll miss everything, I think. I’ll miss the collaboration.

“It was there before me, and it will be there after me.

Names in the mix to replace Daniel as Bond include; Tom Hardy, Idris Elba and Henry Cavill.

Good Morning Britain airs weekdays from 6am on ITV.