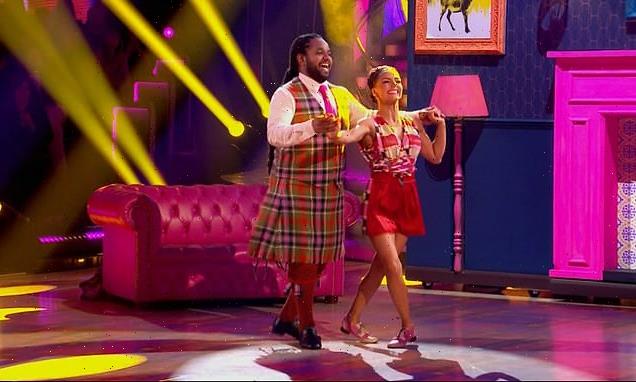 Strictly Come Dancing’s Hamza Yassin tops leaderboard with 39 points while Will Mellor places last with 32, as actor claims he let partner Nancy Xu down by being ‘too aggressive’ in the semi-final

Strictly Come Dancing returned to screens for the semi-final on Sunday night, as the five remaining celebrities took to the dance floor with their professional partners.

The show was moved from its usual Saturday slot due to World Cup scheduling while the results show will be held on Monday night at 8:15pm.

Hamza Yassin topped the leaderboard after their first dance of the evening with 39 points while Will Mellor placed last with 32, with the actor branding his dance ‘too aggressive’. 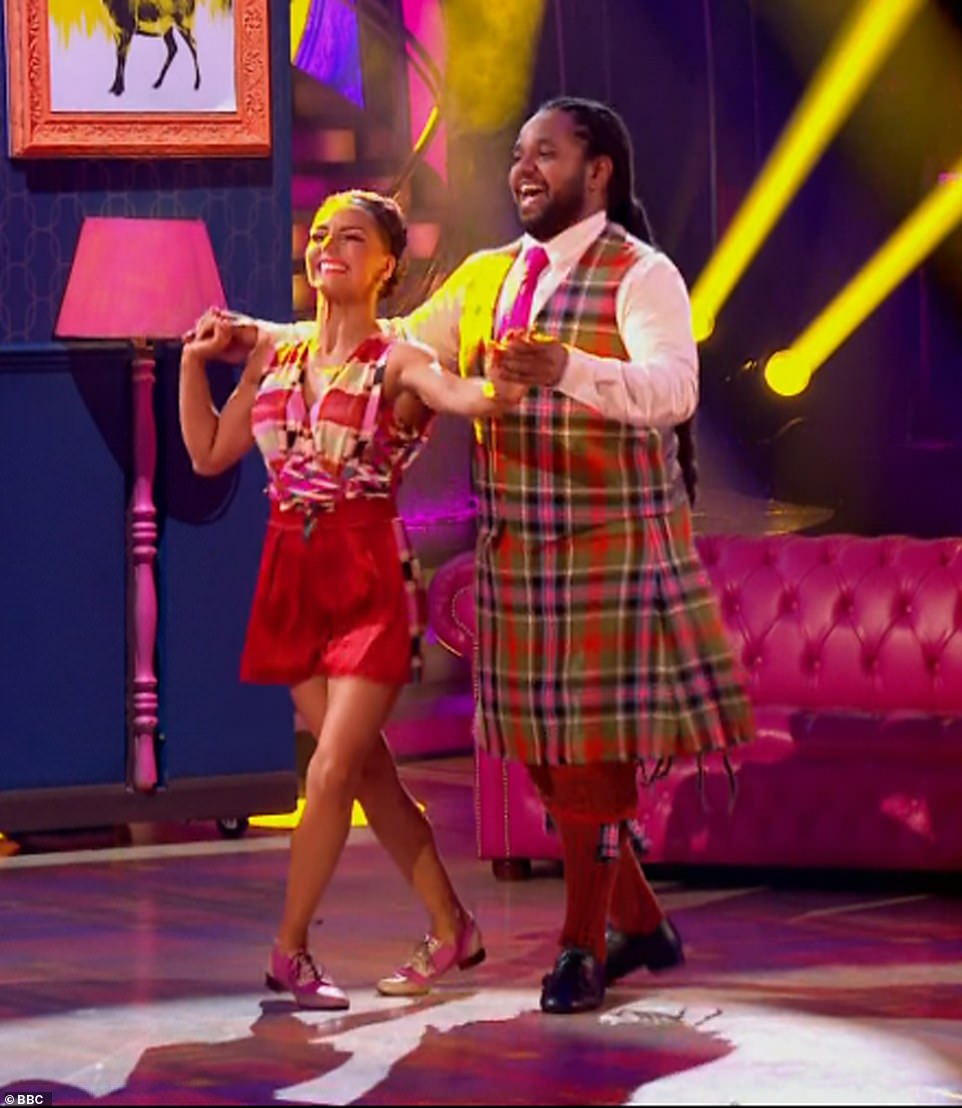 Born to perform: Hamza Yassin (pictured) topped the leaderboard after their first dance of the evening with 39 points while Will Mellor placed last with 32, with the actor branding his dance ‘too aggressive’

Singer Fleur East, 35, and Vito Coppola, 30, were the first couple to take to the stage this week, with the pair dancing the Pasodoble.

Former X Factor star Fleur looked sensational in a green and black dress with a semi sheer top which was embellished with sequins.

Italian Vito showed off his fit physique as he wore an open waistcoat and a pair of black trousers for the performance.

Giving her comments, head judge Shirley Ballas, 62, said: ‘I feel your power, I would have liked a bit of the more rounded shape for a Pasodoble and some of the more micro-details when it came to footwork.’ 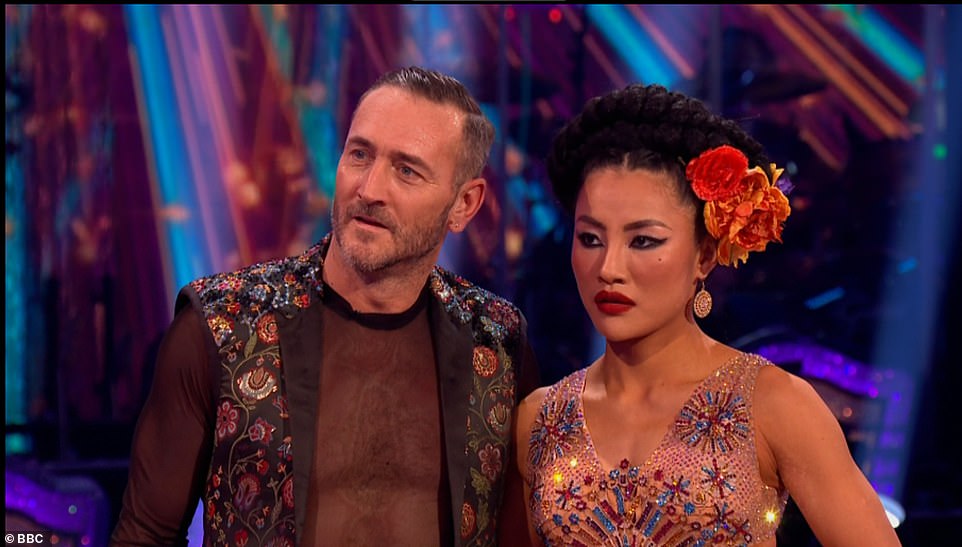 Anton Du Beke, 56, said: ‘You could not have danced this dance this well earlier in the season. This is an exceptional performance for you because I know what you’re dealing with with your power and intensity.

‘For me, this is your best dance of the series.’

Craig Revel Horwood, 57, told them: You lost a bit of footwork and balance… It was a little bit unsure, I would have liked to have seen a softer Spanish line but you did provide strength, you did provide power.’ 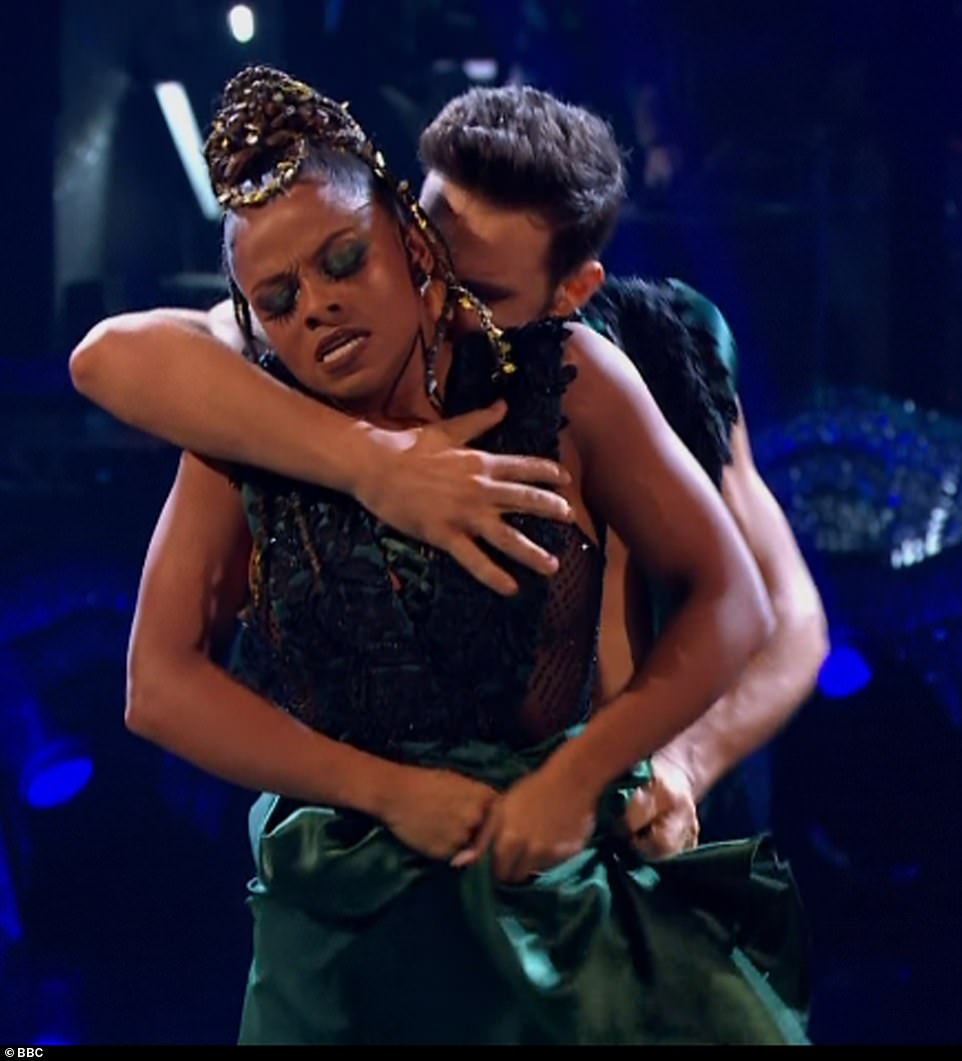 Back with a bang: Strictly Come Dancing returned to screens for the semi-final on Sunday night, as the five remaining celebrities took to the dance floor with their professional partners 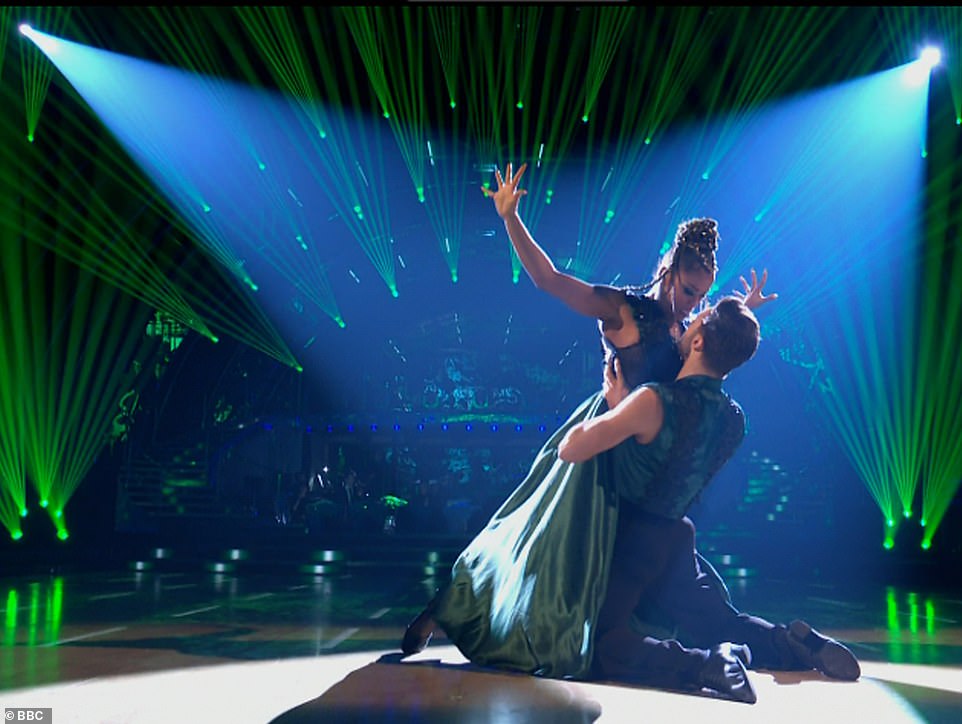 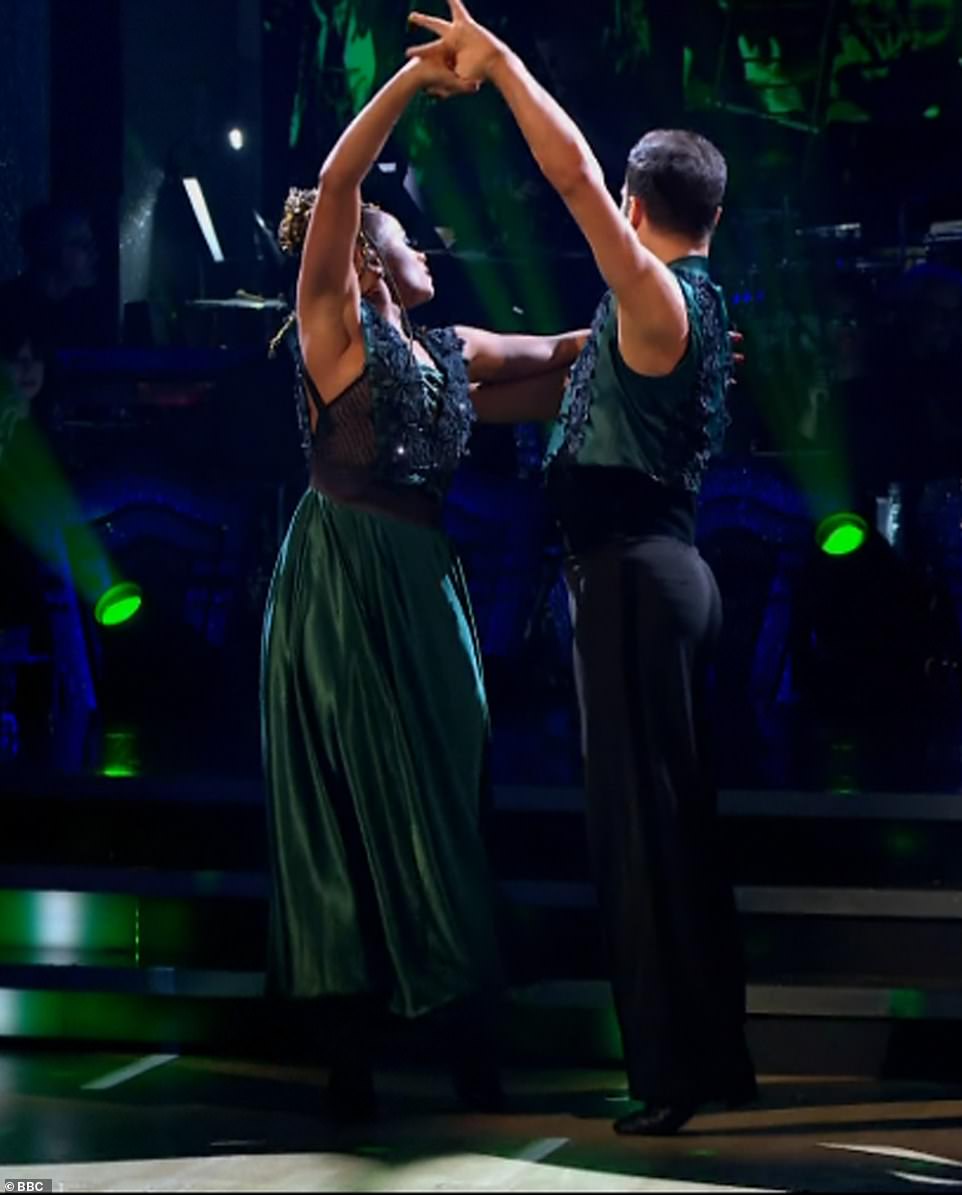 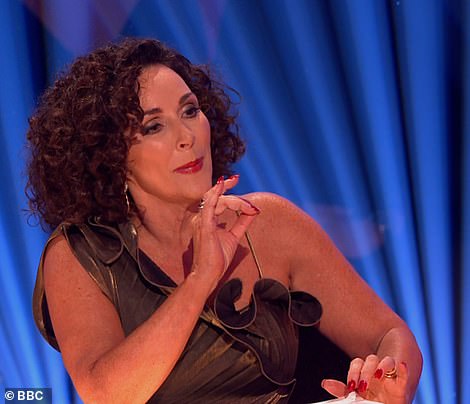 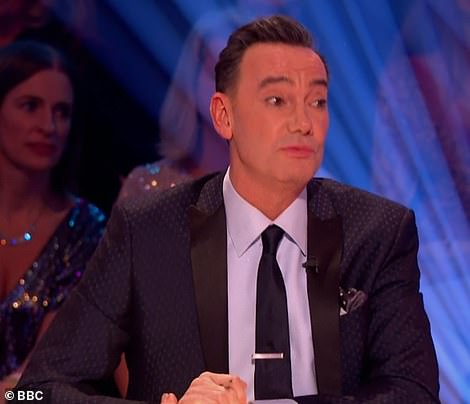 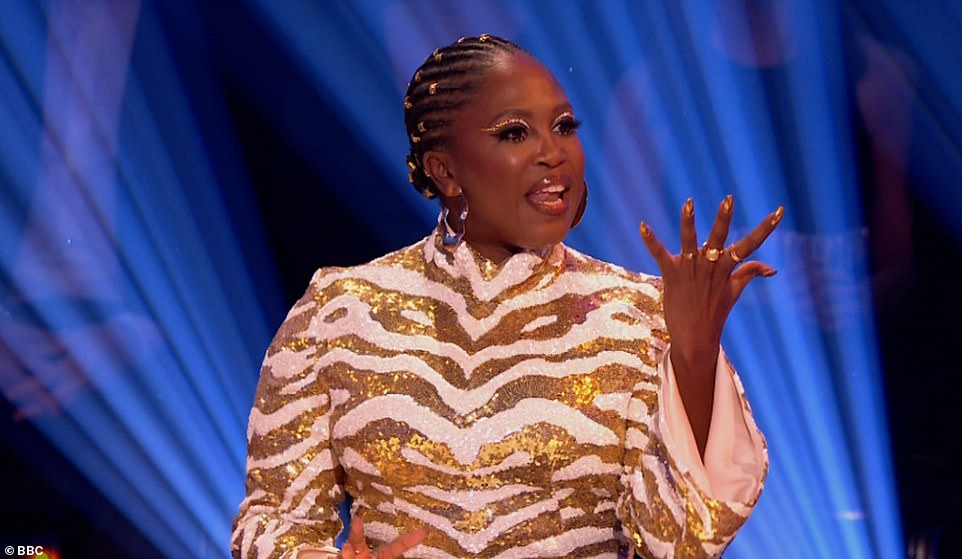 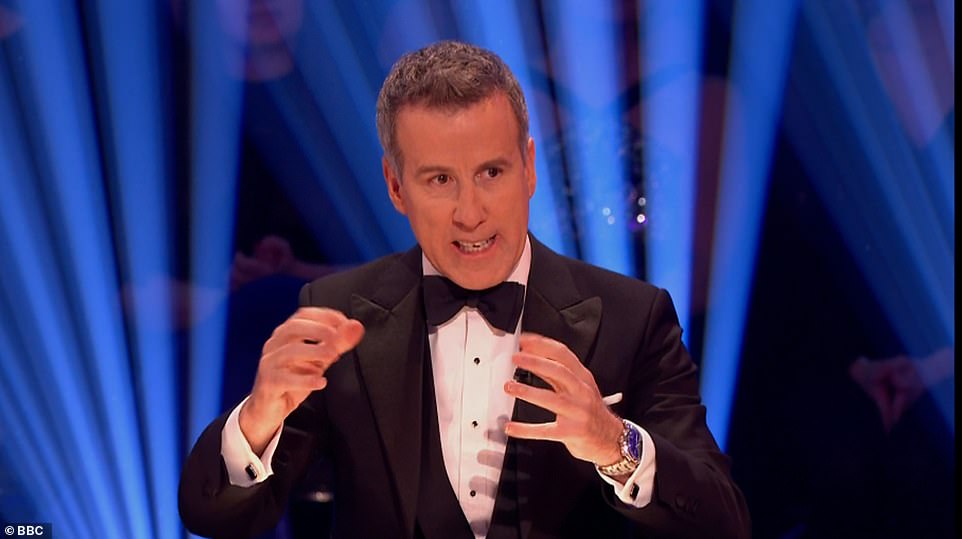 Fleur and Vito were given a total of 35 points put of 40, with Craig awarding them eight, Motsi awarding nine, Shirley giving the pair eight, and Anton giving 10.

Television presenter Helen Skelton, 39, and her professional partner Gorka Marquez, 32, were next to take to the dance floor with the Waltz. 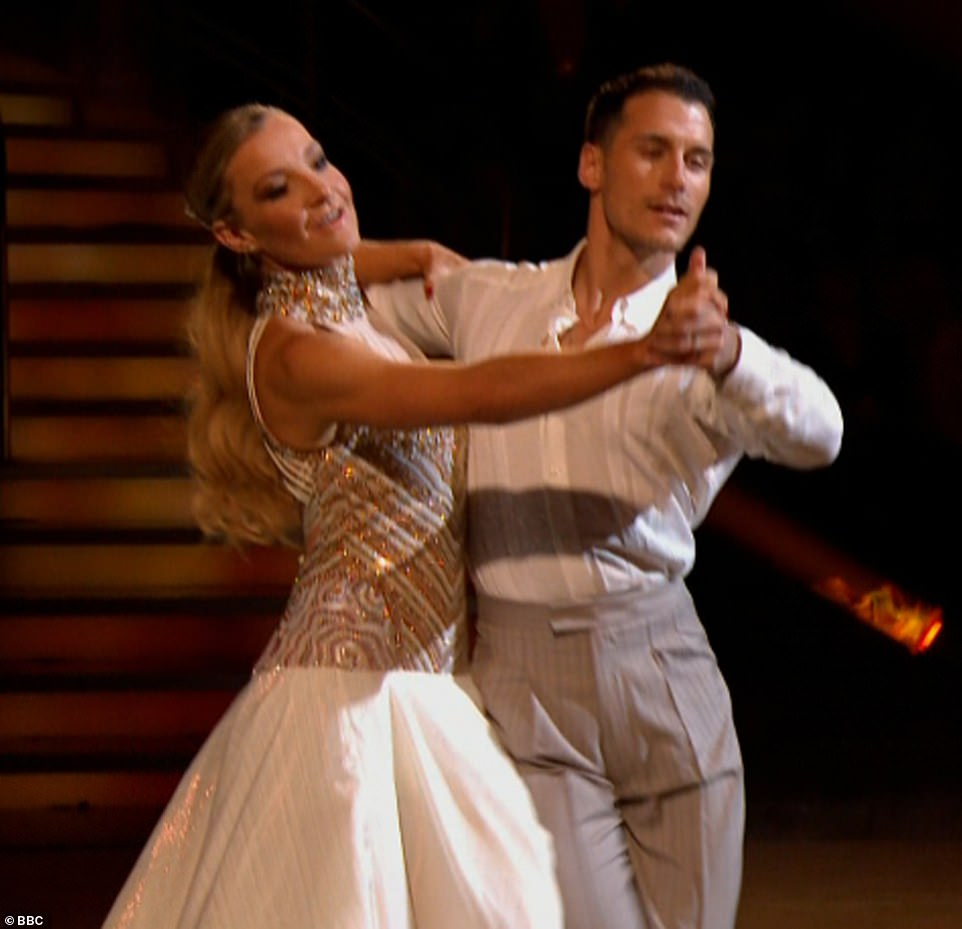 Giving his comments, Anton said: ‘I have to say, that was beautiful. It was soft and romantic. Your promenade position was an absolute delight… Your movement was nice, your footwork was tremendous.’

Craig said: ‘I felt that the whole thing was ever so slightly rigid. I felt that you could have floated through the moments a little bit more but you are a beautiful dancer and it was lovely to watch.’

Motsi, 41, told them: ‘For me, I thought magic. This is creating these special moments that make Strictly Come Dancing… to put on a slow waltz and make it your own, Gorka and Helen, thank you for that.’ 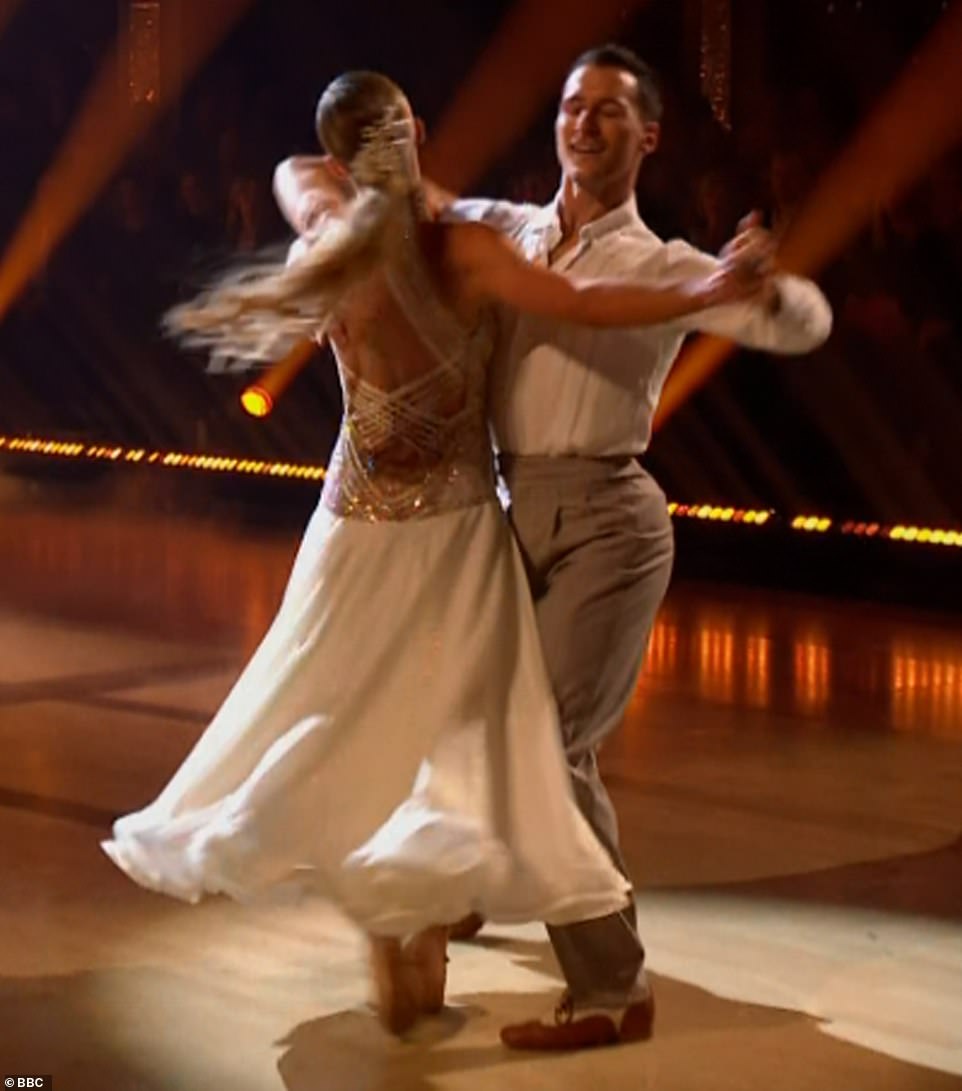 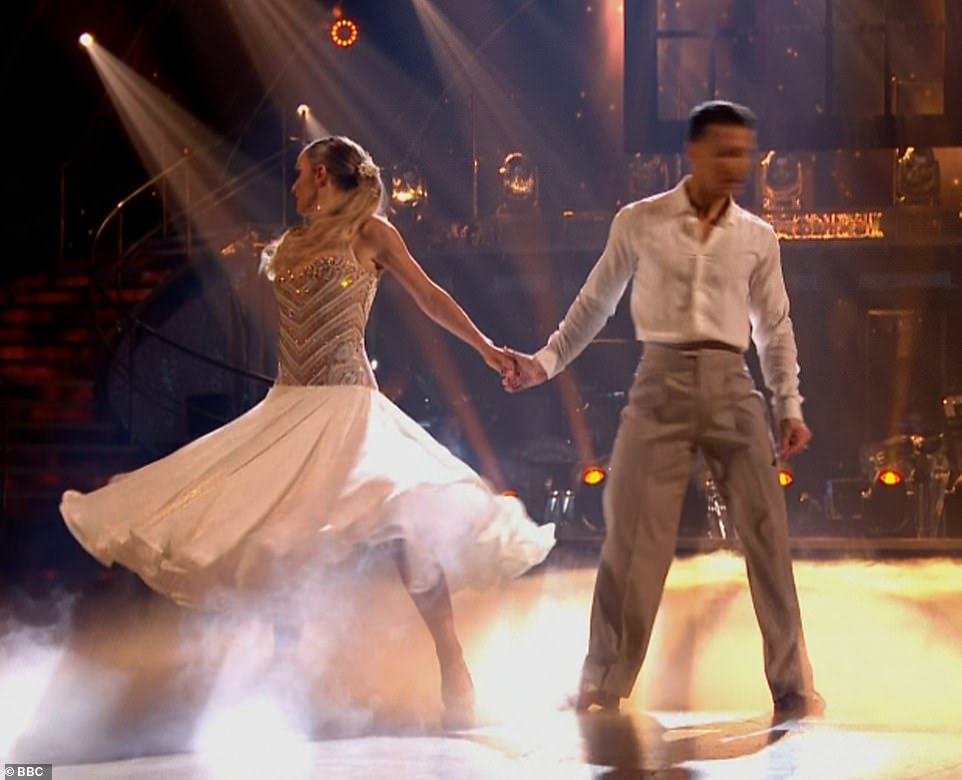 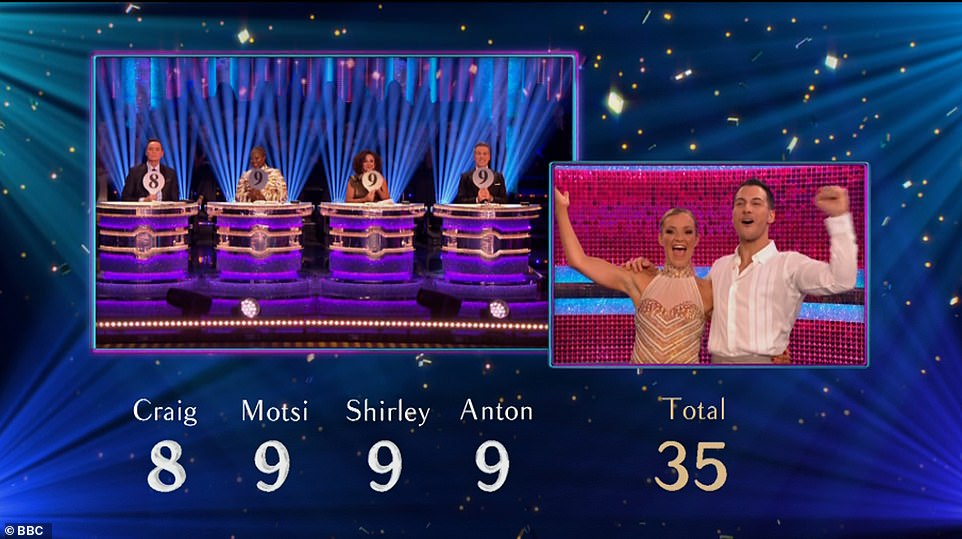 Shirley said: ‘It was a dreamy performance and I think the friendship and the bond that you’ve made showed… there was some lovely footwork and the breathing has come into force so I thought you did extremely well.’

Wildlife presenter Hamza Yassin, 32, and his professional partner Jowita Przystal, 28, took to the dance floor for the third performance with the Charleston. 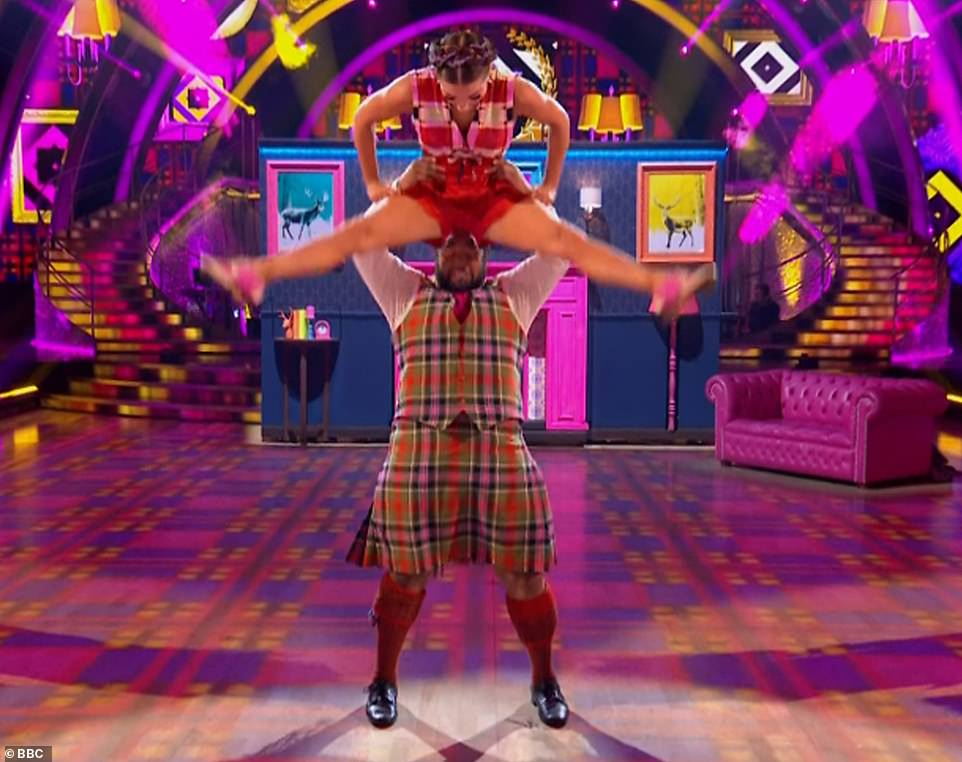 Giving his comments, Craig said: ‘That was full of detail. Those lifts were absolutely crazy spectacular. You were very brave, darling, wearing a kilt in a Charleston.’

Motsi said: ‘You were so alive, present and you really had everything in control. You guys have lifted the levels of lifts in Strictly. Everything was on point. Guys, exceptional.’

Anton told them: ‘You brought everything. That was amazing. Well done.’ 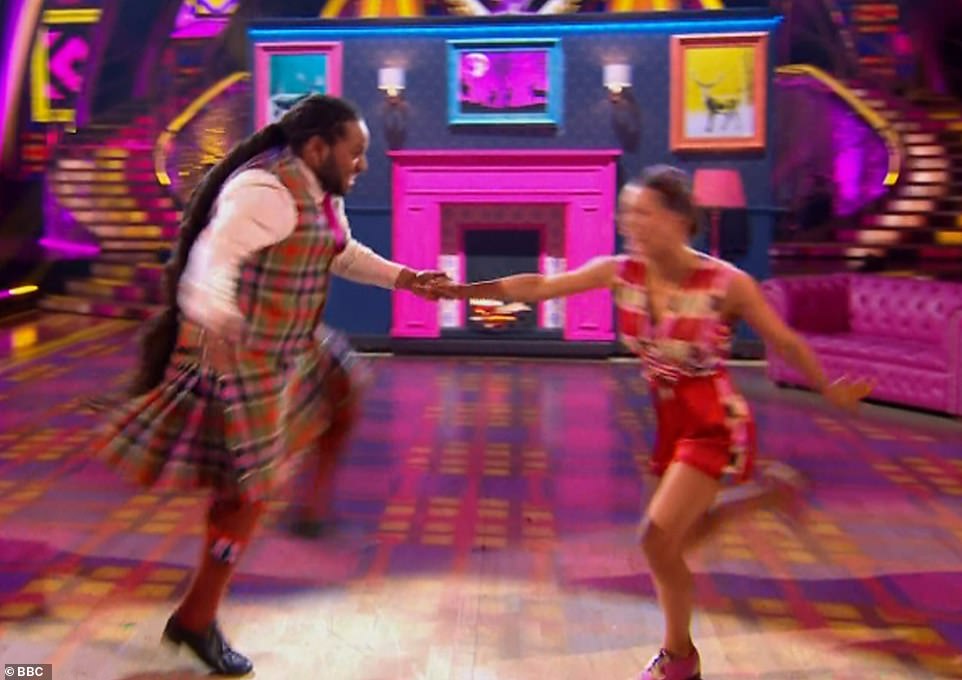 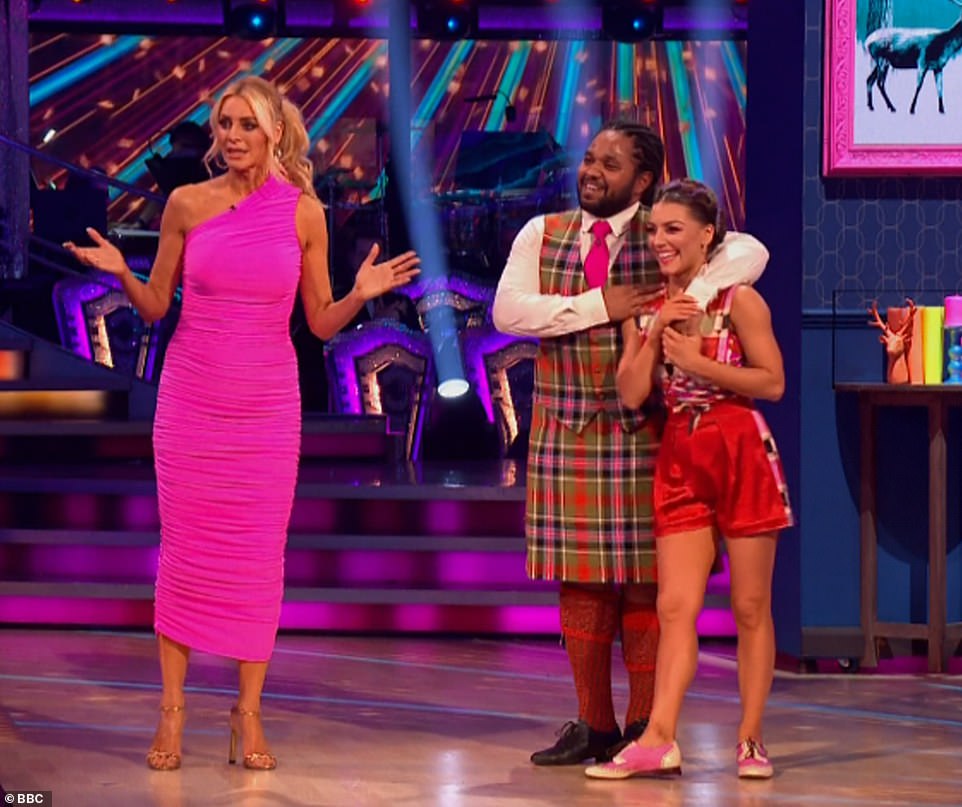 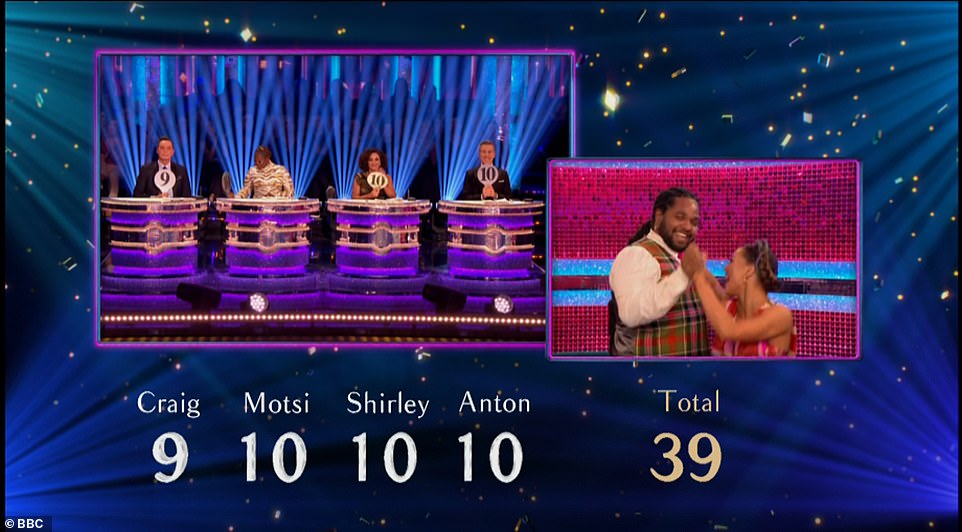 Craig awarded the pair nine while Motsi gave them 10, Shirley awarded 10 while Anton scored another 10. The pair got 39 out of a possible 40.

Television presenter Molly Rainford, 22, and her professional partner Carlos Gu, 28, were next to take to the stage with the American Smooth.

Former Britain’s Got Talent contestant Molly looked glamorous in a backless blue dress which featured a sequinned top half and iridescent skirt, while Carlos looked dapper in a navy blue suit. 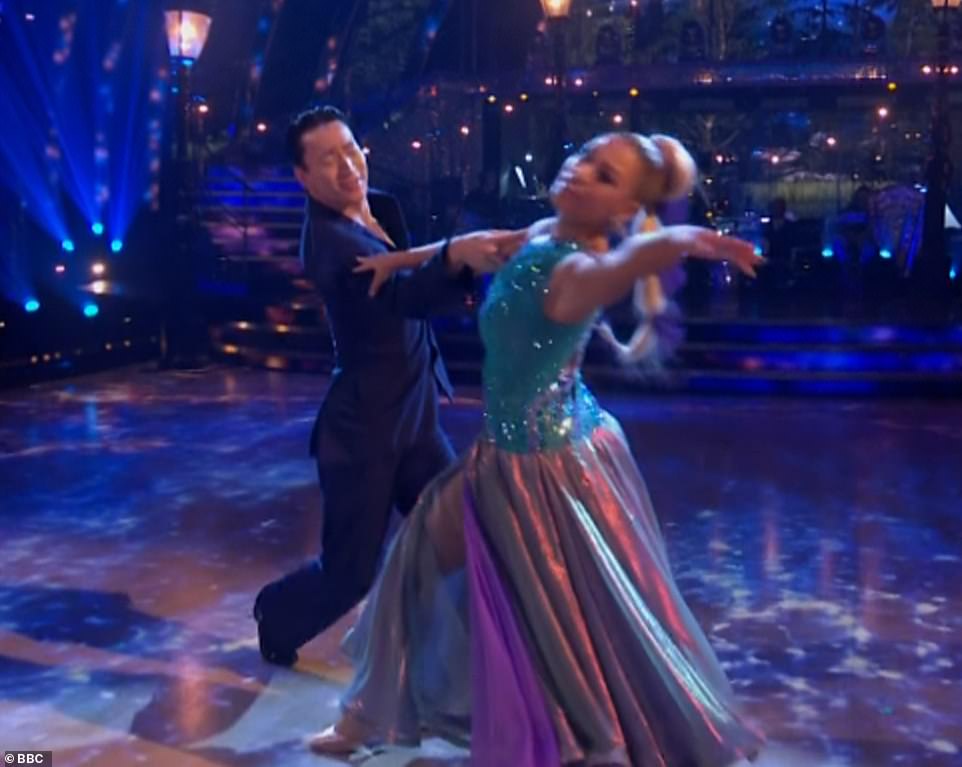 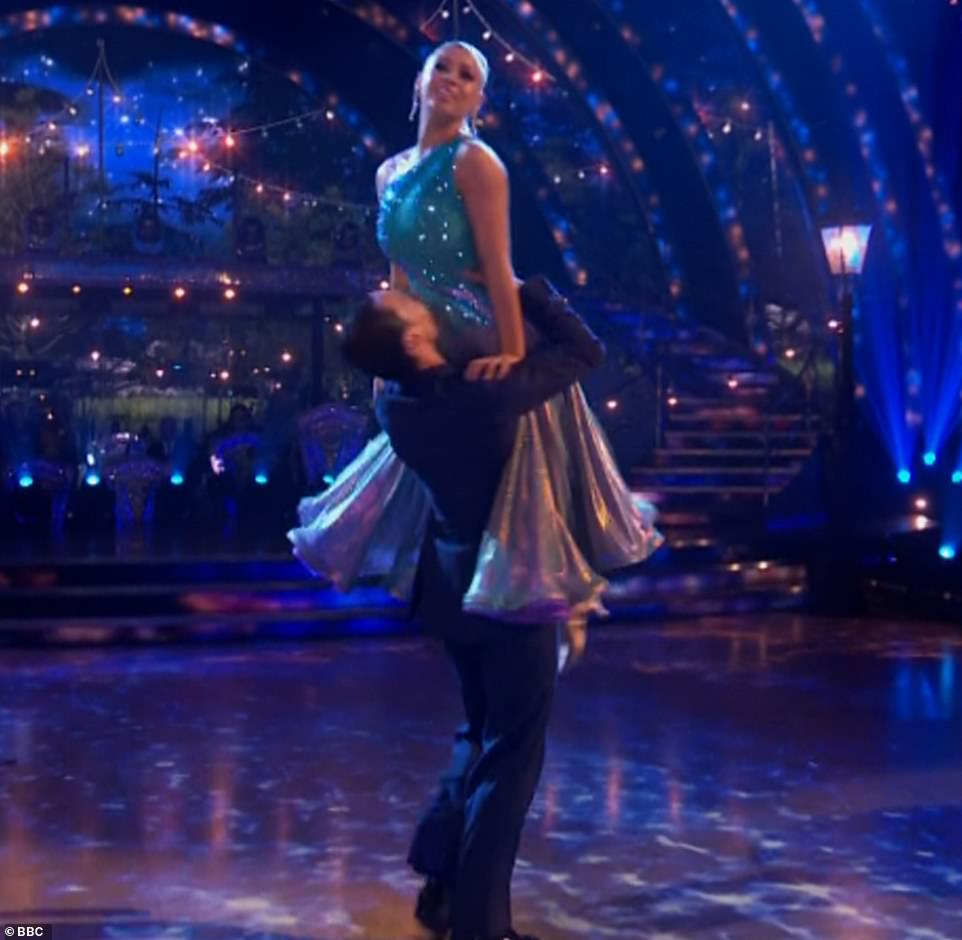 Shirley told the pair: ‘There was a magic between the two of you today. It was quiet, it was serene, it was beautiful.’

Anton said: ‘It was a super performance. I love you in this style of dancing… You’re like an old fashioned goddess of the silver screen… 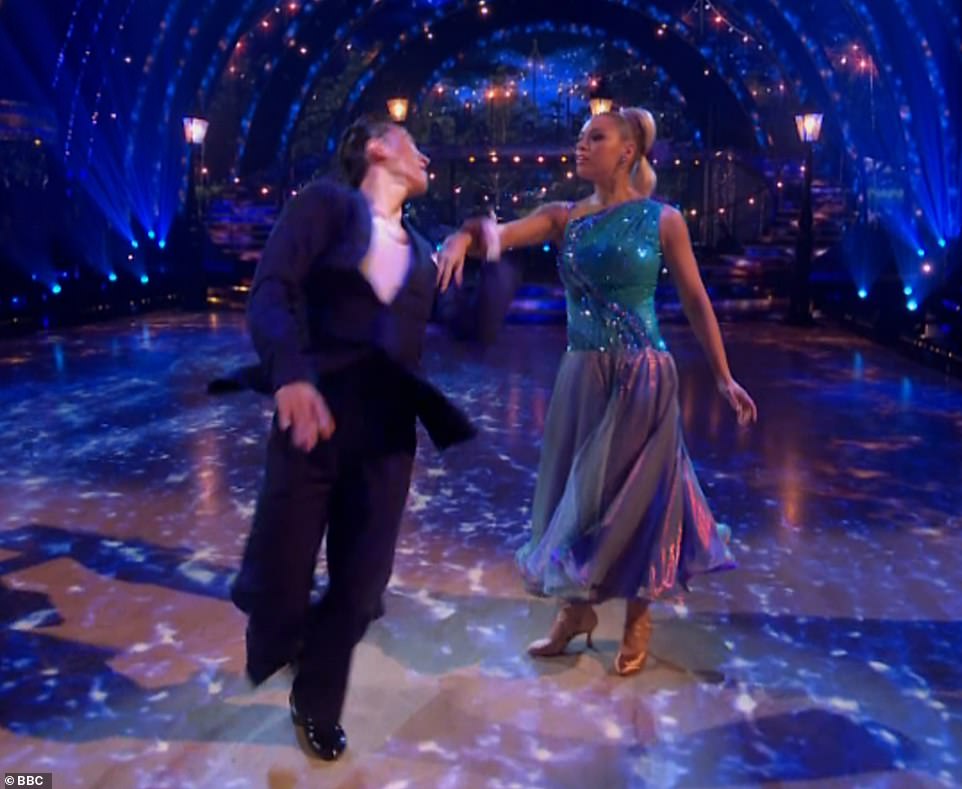 ‘You have a stillness and a calmness that is just unspeakable beautiful.’

Craig told them: ‘For me it was a bit in and out of character. It was full of stops. You stopped dancing and the story stopped and that cooled it down emotionally. I was hoping to see a bit more than that.’

Craig awarded the pair an eight while Motsi gave a nine, Shirley gave nine while Anton awarded a 10. The pair scored a total of 36 out of 40. 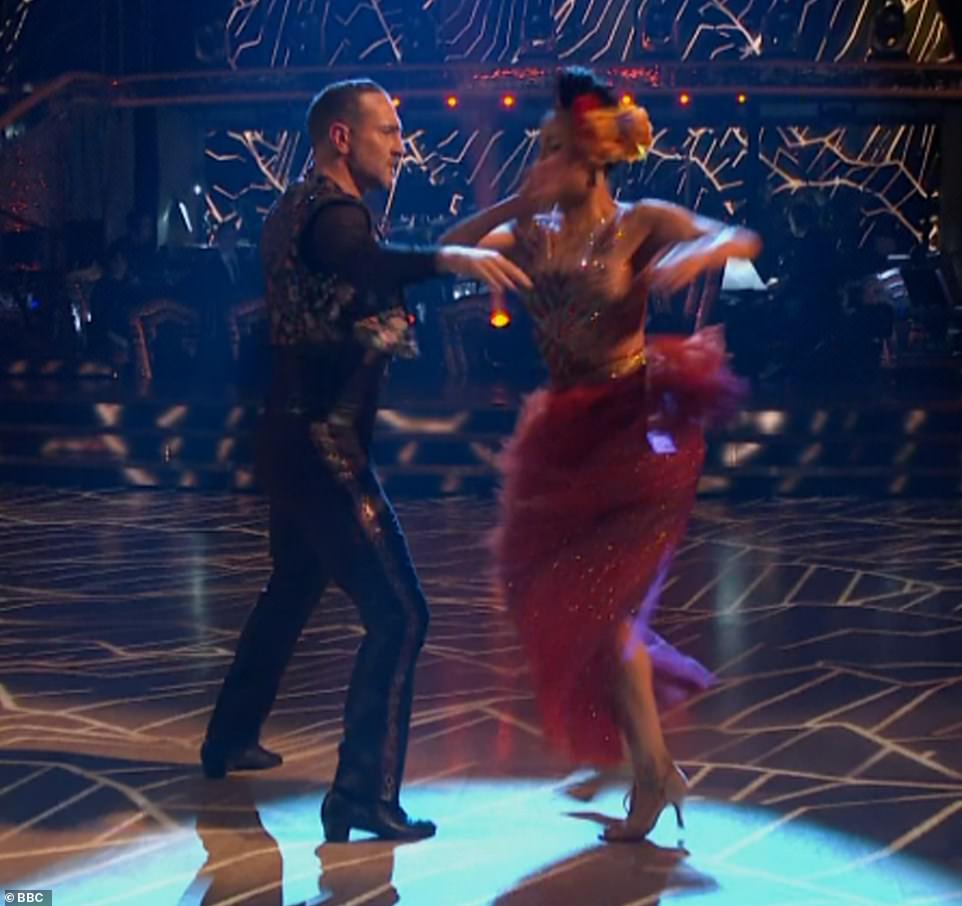 Actor Will Mellor, 46, and his professional partner Nancy Xu, 31, were the final of the five couples to take to the dance floor with their first dance of the evening, with the pair dancing the Pasodoble.

Will wore a sheer black top under a gold and black embroidered waistcoat and matching trousers while Nancy wore a glamorous red and blue dress with a gold belt.

Giving her comments, Shirley said: ‘There was quite a few things missing for me in this dance. You had the arrogance part, you came out and you delivered a good strong message, I’ll give you that. 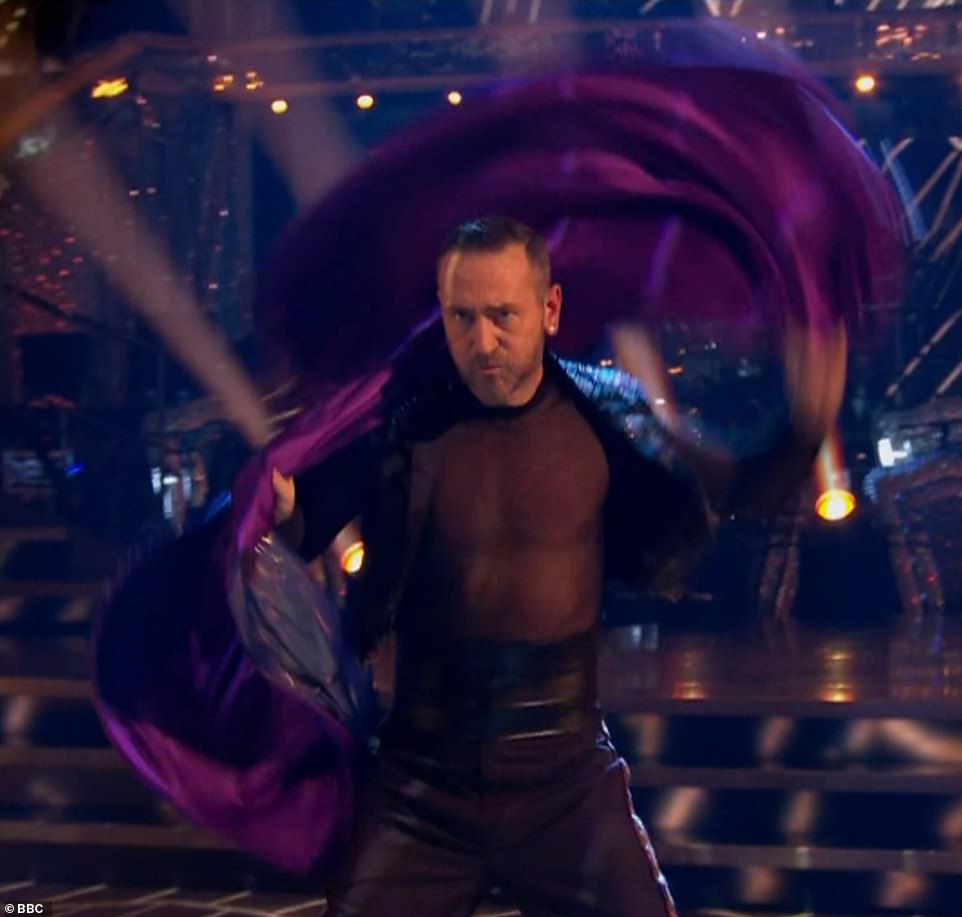 ‘But Pasodoble has been built on an oval shape. It collapsed when you picked her up… when you choose to use a cape, you can’t just flap it about. It is an extension of your arms.

Anton said: ‘For me it is always about the storytelling with you… nothing upsets me more than when the dance gets a bit generic. I never get that with you.

‘I think you tried too hard. You just gave it a bit too much.’ 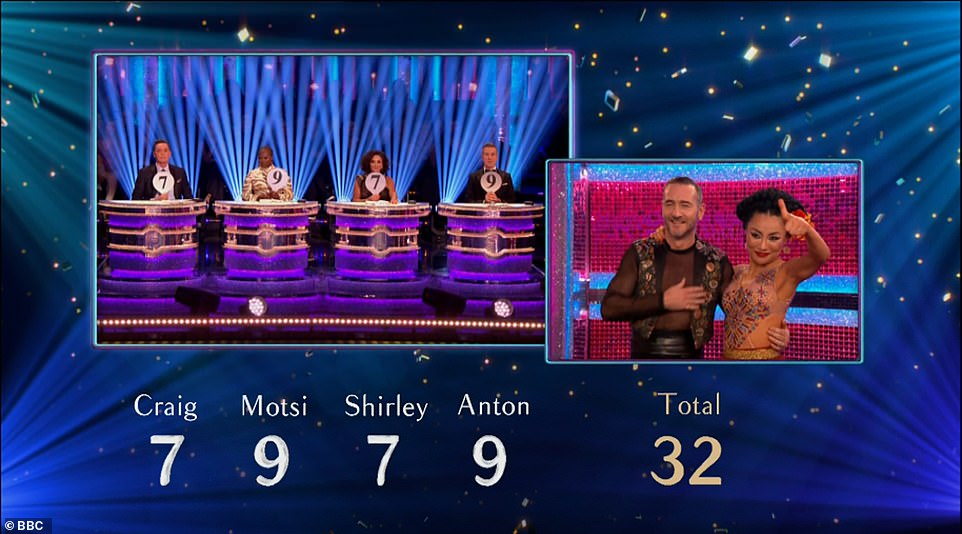 Craig told them: ‘I do have to agree with Shirley, the cape work needed air… I love the way you take command and I know how hard you work but this dance I don’t think was you for tonight.’

Motsi said: ‘You were one of the most committed to the dance tonight so lets see what happens.’

Will said after the dance: ‘I feel rubbish,’ referring to Nancy, he said: ‘I’ve let her down, to be honest.’

Fleur and Vito returned to the dance floor for their second performance of the night with the Charleston. 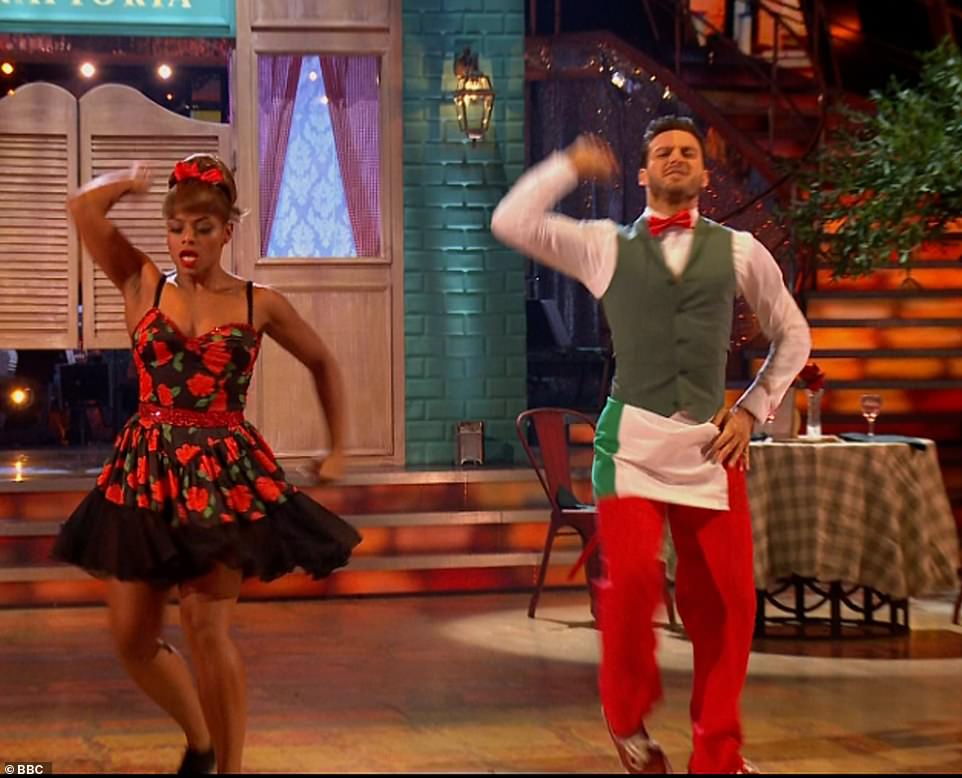 The radio host looked glamorous in a red and black floral print dress while Vito wore a grey waistcoat and matching trousers with a red bow tie.

Giving his comments, Anton said: ‘You are having exactly the night you want to have on a semi-final. You are doing excellently tonight.’

Craig told them: ‘I want to see this one, bizarrely, less controlled. It was absolutely amazing.’ 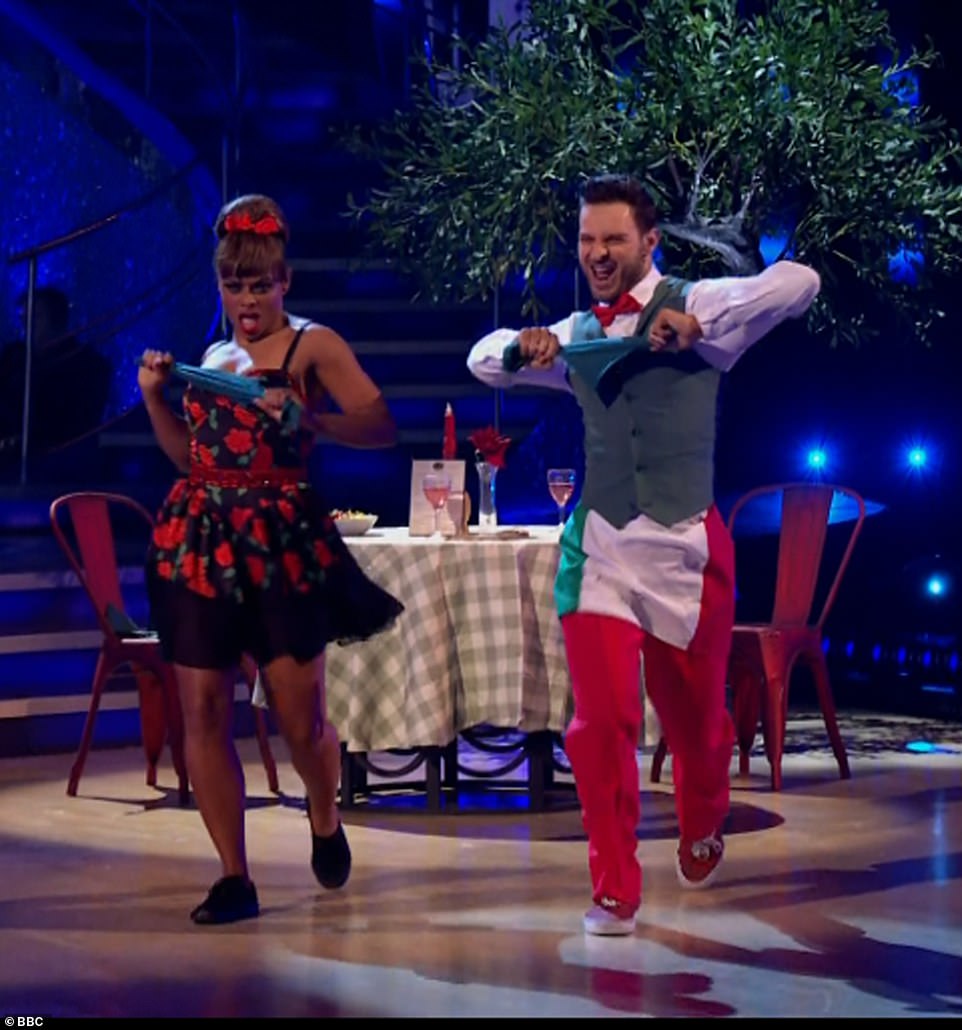 Motsi said: ‘When you look at one of those videos from old times, when you saw a Charleston and how it was… You gave us everything, as Anton said. You elevated to a level at the right part of the competition.’

Shirley said: ‘That was a very, very free performance which I love. This kind of dancing suits you because you can do your own thing. I felt you took charge of it… for that I applaud you.’

Craig awarded the pair nine while Motsi gave them 10, Shirley awarded 10 while Anton also awarded 10. The pair scored 39 out of a possible 40. 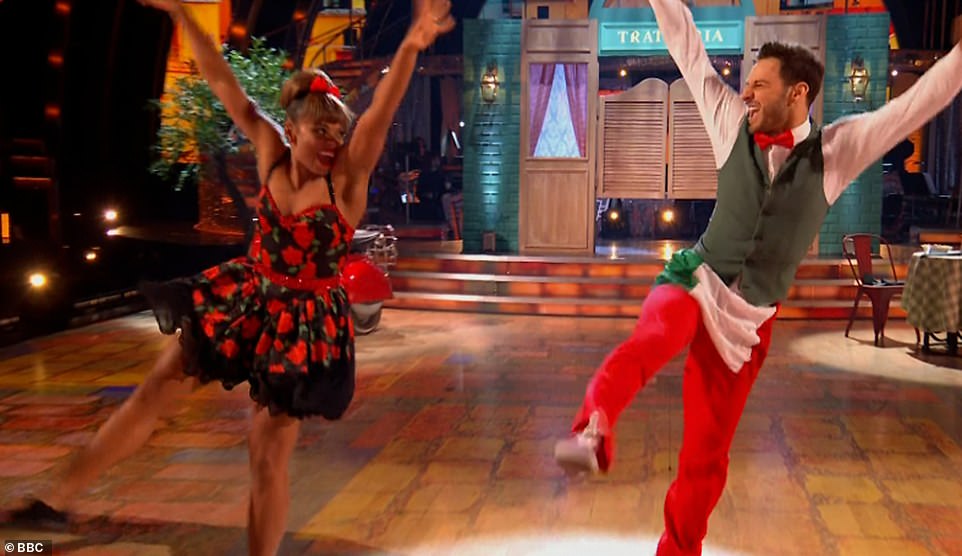 Helen was the next star to take to the dance floor for her second performance, dancing the Argentine Tango with Gorka.

TV personality Helen looked glamorous in a midnight blue sequinned dress with a thigh split while Gorka looked smart in a black suit.

Giving his comments, Craig said: ‘I think you’re a wonderful, wonderful dancer. You put everything into that. I would like to see a little more sweep past the foot. Tiny details. The shoulders became a little bit hunched on occasion but whatever I’ve just said, forget that, because it was amazing.’ 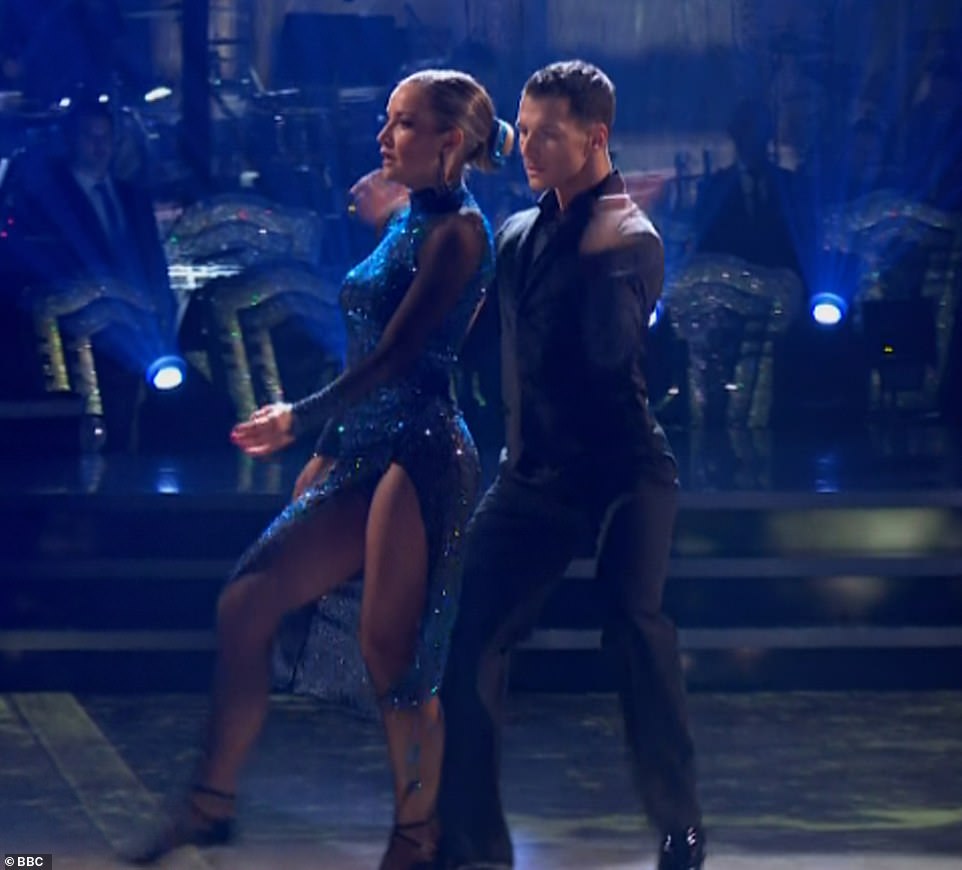 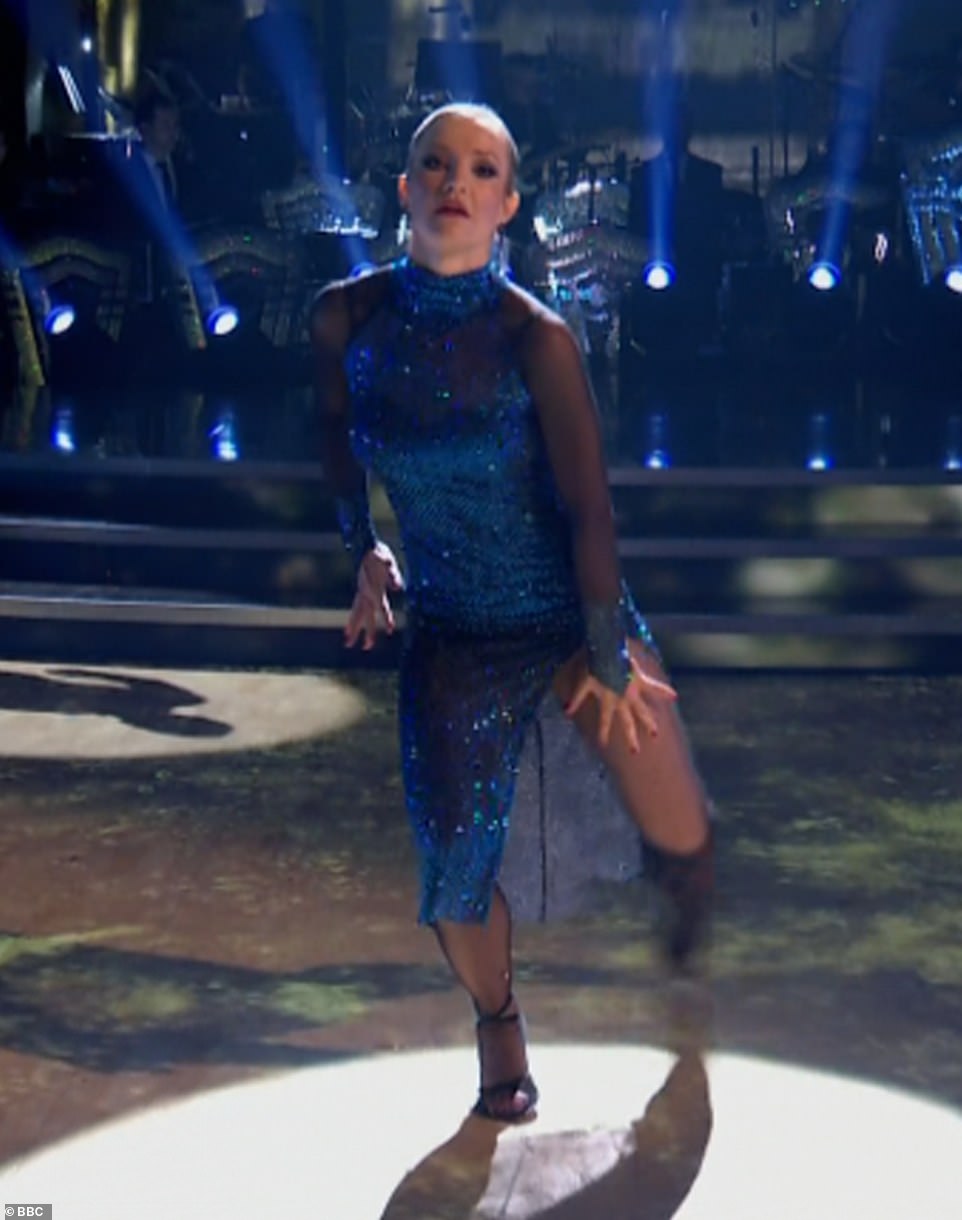 Motsi said: ‘It was intense… for me that was the dance to go into the semi-final.’

Anton said: ‘I like the clarity of everything. I like to be able to read the dance I’m looking at and I can do that with you… I like your intensity with Gorka… I have to say, this sort of real, dark dance is right up your street. I love it, well done.’

Craig awarded the pair a nine while Motsi gave them 10, Shirley gave them eight while Anton awarded them 10. They scored a total of 37. 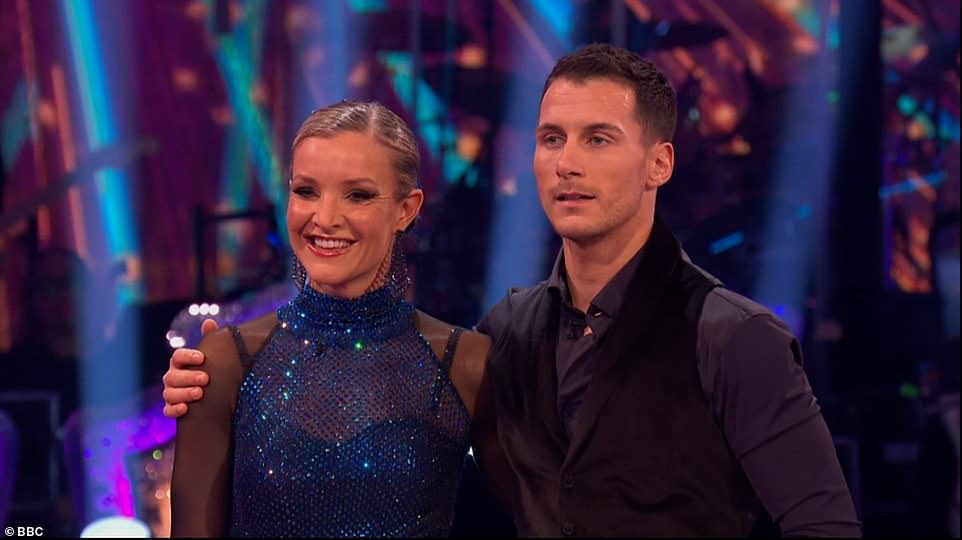 Hamza and Jowita performed their second dance of the evening next, with the pair dancing the Waltz.

Giving her comments, Motsi said: ‘For me, definitely, without a doubt. For me, you are the man of the night. Actually, we more of Hamza… more people like Hamza. Beautiful, soft, grounded, authentic. For Jowita and you, to watch, is just a gift.’

Shirley told them: ‘You have a body which is so beautiful and highly tuned. Today, you’re a little bit twisted with the left arm,’ getting boos from the audience, Shirley declared: ‘Let’s learn! We can’t just give out tens if they’re not right.’

She added: ‘Do I think you belong in the final? Absolutely.’

Craig said: ‘Some people dance the steps, you dance the music and I love that.’

Hamza was moved to tears after he was awarded the scores, with Jowita telling him: ‘What made me the proudest teacher in the world is you always go there on the night, and you go with your heart.’

Molly and Carlos were next to take to the dance floor, dancing the Pasodoble to Destiny’s Child.

Singer Molly cut a very glamorous figure in a gold and black dress with an embellished top section while Carlos wore an embroidered suit in the same colours.

Shirley told Molly after her dance: ‘You are a survivor, you have been that bottom two too many times… You didn’t go over the top, you got the temperature absolutely right. That was one of the best Pasodoble’s I’ve ever seen.’

Anton said: ‘I have to apologise to you Molly because I didn’t think you would pull that off and you absolutely pulled it off.’

Craig told them: ‘I have to agree, it was absolutely fantastic,’ while Motsi said: ‘What can I say, perfection! Thank you!’

Judge Craig awarded the pair a nine, prompting boos from the audience, while Motsi gave them a 10, Shirley awarded a 10 while Anton also gave a 10. The pair scored 39 out of a possible 40.