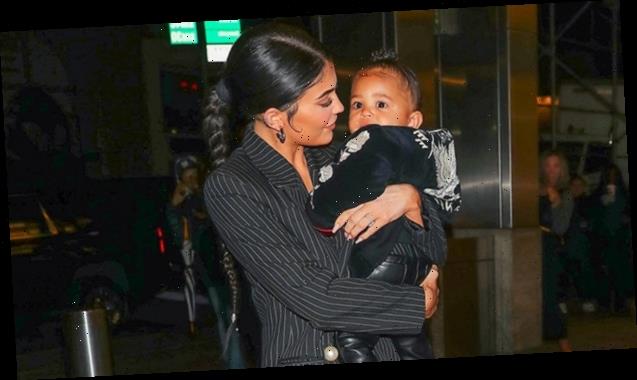 Stormi Webster is such a fashionista! Kylie Jenner’s two-year-old slayed in a denim jacket and little bike shorts for the sweetest pic on mom’s Instagram.

It’s a weird feeling finding out that a literal toddler is cooler than you’ll ever be. Kylie Jenner‘s two-year-old daughter, Stormi Webster, was serving major looks on Instagram on June 28, and her outfit is cute enough for any fashionista, of any age. The Jenner kiddo rocked the tiniest denim jacket with cute scribbles all over it, a tee, and chunky Nike hi-tops. She took a cue from Auntie Kim Kardashian and rocked bike shorts, too!

Isn’t she just too precious? Kylie, 22, keeps her Instagram feed full of sweet photos of her daughter. She posted one on June 25 that showed her holding Stormi in her lap while sitting in the front seat of a red Lamborghini SUV. It appears to be taken in the driveway of her Hidden Hills mega mansion. Kylie is gazing adoringly at her little girl, and the caption was just as heartwarming: “I knew I won when I had you.”

Just days before, Kylie let fans in on her snuggle session with little Stormi. In the photo, she kissed and cuddled her daughter on the front steps of a giant home — possibly her mansion? — while wearing slippers and a satin robe. She captioned the post, “my remedy for everything.” Aw!

Stormi’s been a busy bee lately. Not only did she shower her dad, Travis Scott, with Father’s Day gifts, but she managed to find time to star on the cover of Vogue Czechoslovakia with her mom. The feature, titled “Bedtime Story”, shows the mother daughter duo making the same expression, and they’ve never looked more alike!