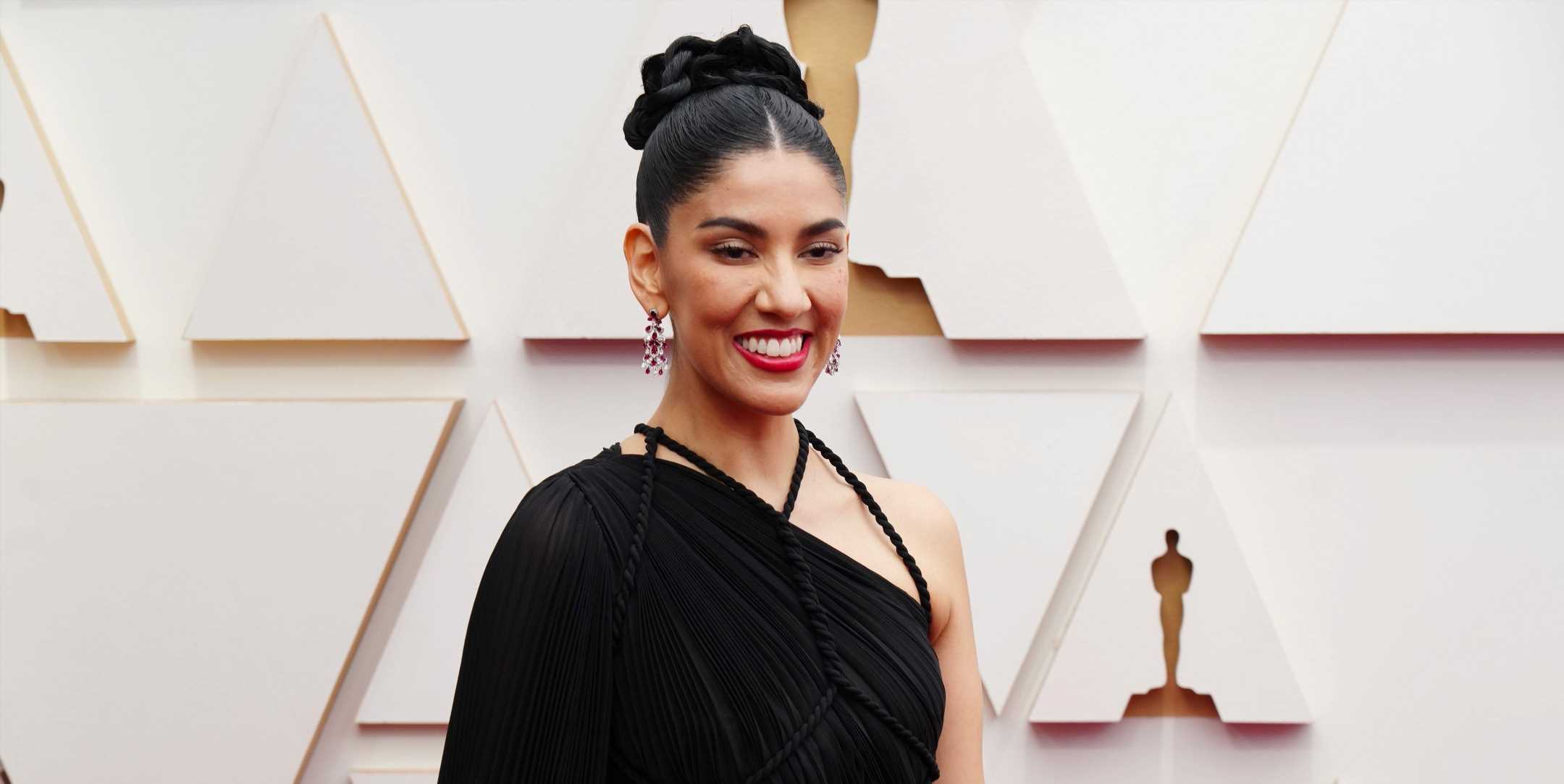 For a first-time Oscars attendee, Stephanie Beatriz had one hell of a night. Not only did she get to attend because her film Encanto was nominated for—and eventually won—Best Animated Feature Film, but she also got to introduce the performance of Encanto‘s “Dos Oruguitas” *and* she got to perform a song with her cast-mates, with surprise appearances by Megan Thee Stallion, Becky G, and Luis Fonsi. Casual!

In addition to voicing the lead character in Encanto (Mirabel), Stephanie starred in last summer’s In The Heights, and if you didn’t catch either of those two movies then (1) go stream them right now, and (2) rest assured you still know Stephanie after all thanks to her years on Brooklyn Nine-Nine as detective Rosa Diaz.

Cosmopolitan caught up with Stephanie on her way to the Vanity Fair Oscars after-party and asked about her first time attending the ceremony, what it was like to share the stage with Megan Thee Stallion, and why food is her number one priority for the rest of the night. 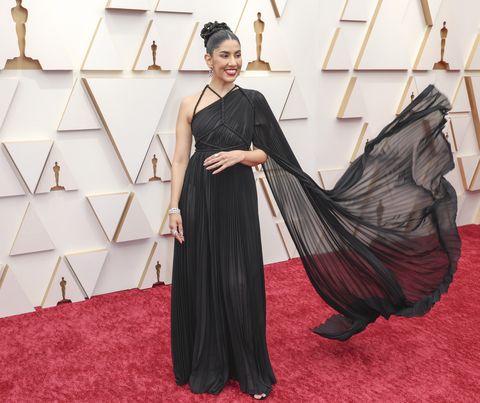 Cosmo: How are you doing right now? What’s the stamina situation?

Stephanie: Oh, I’ve definitely had a coffee in my hotel room while getting ready to go to the Vanity Fair party. I’m trying to stay hydrated, and [I’m] just really excited to go to the next party and then the next one after that. It’s a weird, wonderful, time-has-no-meaning moment.

How did it feel being with the Encanto cast and creators in this setting? You guys looked like you were having a blast on the red carpet!

We were loving life, especially because we recorded all of Encanto during the pandemic so we were all so separate. To be able to reunite on the carpet for the Oscars for our film, which was nominated and won, was such a beautiful moment.

One person who was noticeably absent tonight was Lin-Manuel Miranda, who couldn’t make it because his wife tested positive for COVID-19. Were you guys able to include him in any way? FaceTime him in?

We all were messaging him individually and group-wise, but we just wanted to be respectful because it was obviously like, what an intense moment to be nominated for an Oscar and then not be able to be there. But it is the reality of this world right now in which we’re still trying to be really careful and cognizant of people that are vulnerable to this really intense disease.

This is your first time at the Oscars. Did you do anything differently to get ready for tonight?

Something that definitely felt different is that I had a baby seven months ago. Going to fun awards shows and celebrations about our field is also encased in a backdrop of being a new mom, and for me at least, part of that has really been accepting who I am and the body that I’m inhabiting at this moment in time. And I think in my youth, I was really stressed and worried about, Am I thin enough? Do I fit in the dresses? Do I look right on the carpet? And now, really after having a kiddo—and she’s a girl—I think about how I want her to feel in her body and so I try to embody that as well. My body served me so well. It’s this vehicle for my art, and I don’t take it for granted and I celebrate what it’s capable of. 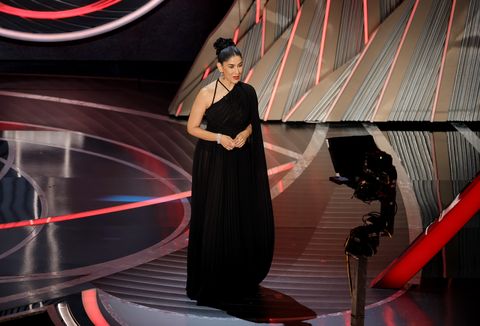 I’m not trying to be anybody’s idea of who I’m supposed to be. I’m just trying to be my best self at this moment. Because bodies change, they fluctuate. They change your whole life. And so why not take the time to be present in this moment and celebrate the body that I have now, versus being cruel to myself.

I want to talk about the ceremony itself. What was the vibe like in the room tonight? It seemed like it definitely shifted as the evening went on.

Exciting, thrilling, celebratory, almost surreal, because so many of us have spent so much time in a lockdown situation, and so many of us have suffered lots of different things over the last few years, but what was really nice was to get together as artists and collaborators to celebrate each other and each other’s art and to acknowledge that the work we all do is important to people. 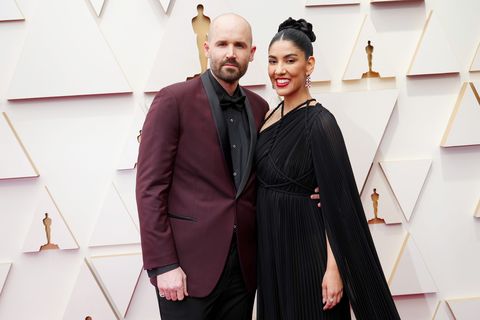 How much mingling happens during the show? Do you get to chat with other people? Do you find yourself in the bathroom next to Kirsten Dunst?

I think it depends on who you are. I definitely took some bathroom breaks, but I also got to talk to a few of my idols. I hung out with John Leguizamo for quite a bit and then I was able to chat with Alfred Molina. The night is what you want to make it, so if you want to bounce from table to table that’s on you. And if you want to sort of sidle up to the bar and get your second glass of rosé, it’s also on you.

There is literally no wrong at the Oscars. It’s just a night of fun.

You got to introduce a musical performance from Encanto. Was there anything in particular you were nervous about going into presenting? I assume it’s a little nerve-wracking!

I actually really enjoy live performances. I started my career in the theater, so being on a stage doesn’t really bother me. I wasn’t thinking about the people at home, maybe watching television. I was thinking about introducing this beautiful song that Lin-Manuel wrote, and that we were lucky enough to have Sebastián Yatra perform in the film. For me, that song really is the crux of the film. It’s this moment where you really understand the characters in a way that maybe you didn’t before. It’s a reflection of, as an adult, that moment when you understand something about your parents or something about your family that you’ve never really understood before. It’s a really special song, and I was so honored to be presenting it tonight.

It was an emotional moment in the show, too. I found myself tearing up my couch.

It’s such a beautiful story. Two people who love each other but then have to be torn apart. As we’re living in the world today, we can see it all around us. We could see it in our hometowns, but we can also see it in countries far, far away from us, people that love each other, families, human beings that are torn from each other.

You also got to perform a song tonight, “We Don’t Talk About Bruno.” I’m curious in particular about the Megan Thee Stallion collaboration that was a surprise to audience members. How did that come together?

I was so psyched to know that Megan was doing this because, as a fellow Houston girl, I’m just so excited for everyone to see how amazing she is. Seeing her perform live, I hope people understood, like, Megan is a force to be reckoned with. It’s also something that you don’t really get to do as someone who is doing a voice in an animated feature. You’re pretty sure that the audience will never connect your face to that voice. And that’s okay, that’s what you’re signing up for. So it was really such a gift from the Academy to be invited to perform and take ownership of that song as ourselves. 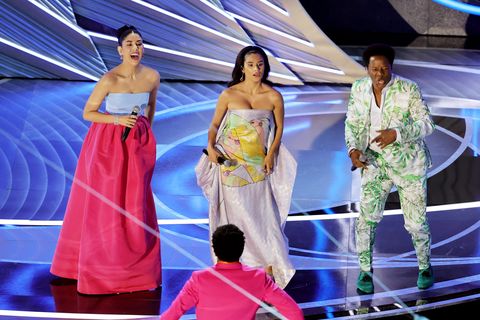 Were there any moments in the show that made you particularly emotional about your movie or someone else’s?

I loved the opening of the show with Serena and Venus Williams. I thought that was so special to highlight these two incredible athletes and women. And then the performance by Beyoncé, I thought was fantastic. Jessica Chastain’s speech was beautiful. The way that she talks about the world and particularly the gay community, and so much in the footsteps of Tammy Faye, who she played and won an Oscar for playing. I think she’s so brilliant.

Okay, so now that the ceremony is over and the partying can commence, have you ditched your high heels or are you hanging in there?

We’re in a very reasonable platform, so I think I’m gonna make it through okay. 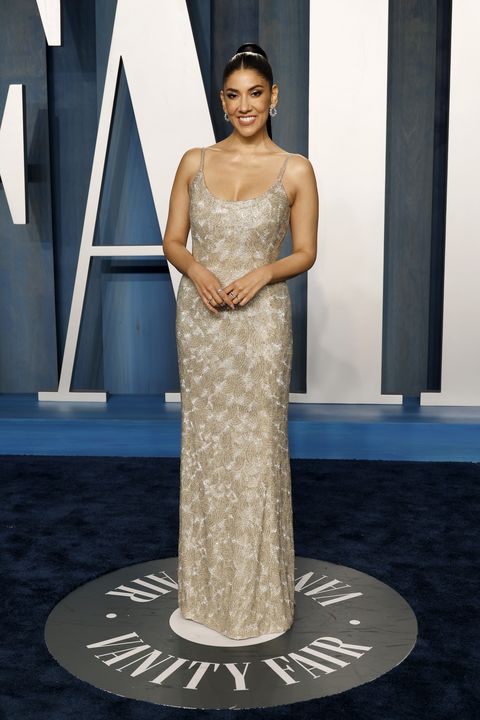 Who are you hoping you run into or meet tonight? Is there a pie-in-the-sky person?

The pie-in-the-sky is the pie. I’m so excited for the food. I don’t know what it’s gonna be. Like, legitimately thinking about like, Is there going to be In and Out? Are there going to be burgers? Is there a chicken nugget station? I am one of those friends that, anytime you get to a party, I’m like, Yo, here’s where the pizza is. I’m so into where the food is at all times.

And I don’t know he’ll be here, but the one person that regret not saying hello to when I could have was Guillermo del Toro. I love his work. I’ve loved it since since he really started working, and I just got overwhelmed and was too shy to say hello. So if for some miraculous reason Guillermo is at this party, which I doubt he is because he’s way too cool to be in any parties ever, I’d like to talk to him.