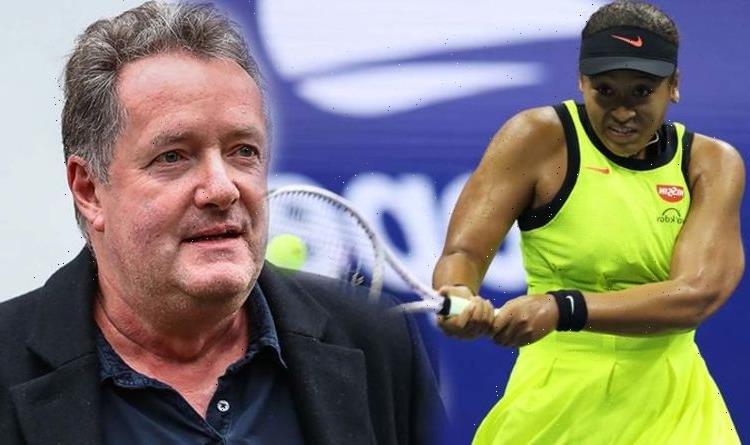 Piers Morgan has launched a fresh attack on Naomi Osaka in a scathing tweet, shared in view of his 7.9 million followers. The TV personality, 56, labelled Osaka a “spoiled brat”, as she lost in three sets to 18-year-old Leylah Fernandez in the third round of the US Open.

Earlier today, Morgan tweeted: “People got very upset when I suggested Naomi Osaka may be a spoiled brat.

“Here she is repeatedly smashing up rackets as she loses in the US Open.

“Then she cried again, and threatened to quit again.

“If a male tennis player behaved like this, we’d call him…. a spoiled brat.”

Some of Piers’ followers appeared to agree with the former Good Morning Britain presenter.

One Twitter user wrote: “She’s clearly more concerned about being a public figure in Vogue magazine than a good tennis player.”

Another person added: “I hate to see ‘adults’ behaving that way, not a good look, her parents must have let her get away with it when she was small and she hasn’t grown out of it.”

A third commenter chimed in: “And note that even the umpire was too scared to give her a warning.”

However, other tennis fans responded to Morgan’s tweet in defence of the 23-year-old defending champion.

One person wrote: “Breaking a racquet or throwing one out of anger or frustration is a common sight in tennis.(sic)

“It’s not a new thing. Nothing much is said about anyone else doing it.”

Another viewer added: “This kind of thing happens literally all the time.

“Also not a single racket in this video is ‘smashed up’.”

Earlier this year, Osaka sent shockwaves through tennis fans as she announced her French Open withdrawal.

In a statement released on May 31, she cited her mental health as part of the reason behind her departure.

Osaka said: “Hey everyone, this isn’t a situation I ever imagined or intended when I posted a few days ago.

“I think now the best thing for the tournament, the other players and my well-being is that I withdraw so that everyone can get back to focusing on the tennis going on in Paris.

“I never wanted to be a distraction and I accept that my timing was not ideal and my message could have been clearer.

“More importantly I would never trivialise mental health or use the term lightly.

“The truth is that I have suffered long bouts of depression since the US Open in 2018 and I have had a really hard time coping with that.”