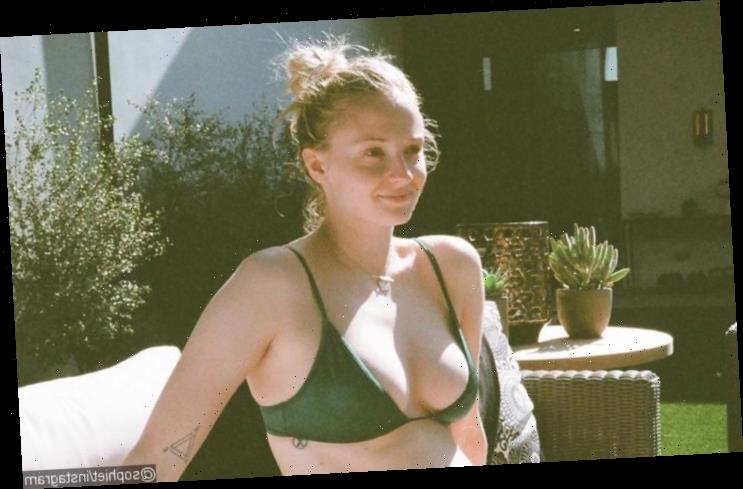 In a surprising move, the ‘Game of Thrones’ alum, who is known to be private about her pregnancy journey, has taken to her Instagram account to share some never-before-seen pregnancy photos.

AceShowbiz -New mom Sophie Turner has been known to be private about her pregnancy journey. However, 2 months after she gave birth to daughter Willa with husband Joe Jonas, the “Game of Thrones” alum has surprisingly taken to her Instagram account to share some never-before-seen pregnancy photos.

One of the photos saw the 24-year-old actress enjoying a relaxing pool day with her dog. One other featured Sophie flaunting her baby bump while donning pink-and-white pajamas from Hotel Bel-Air. A hand, which seems to be Joe’s, could be seen rubbing the bump.

Sophie and Joe welcomed their first child together on Wednesday, July 22, one year after tying the knot. Confirming the good news, their publicist Gertie Lowe said in a statement to the press, “Sophie Turner and Joe Jonas are delighted to announce the birth of their baby.”

A source spilled to Entertainment Tonight at the time, “Joe and Sophie welcomed a baby girl last Wednesday in L.A. and are over the moon. The couple is already obsessed and can’t stop gloating about their new addition.”

The insider further claimed that the couple planned to keep their baby away from the spotlight for the time being. “The couple is taking time to enjoy this special moment and have only shared the news and updates with family and friends. With the pandemic Joe and Sophie have been very cautious about who is around them and their little girl,” said the source.

The “Dark Phoenix” star and the Jonas Brothers singer married in an impromptu wedding at A Little White Wedding Chapel in Las Vegas, Nevada on May 1, 2019, right after the 2019 Billboard Music Awards, after dating for almost three years. They renewed their wedding vows in a bigger ceremony in Paris, France on June 29.