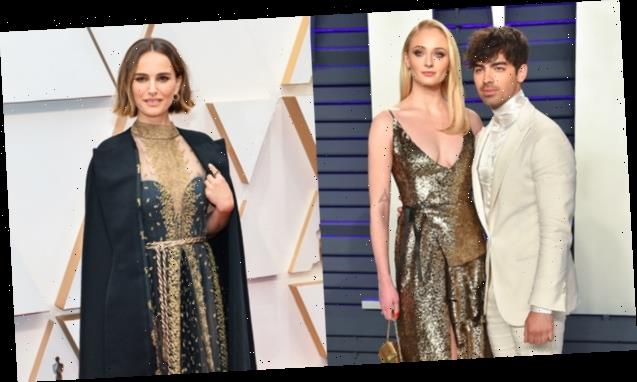 Sophie Turner and Joe Jonas received the cutest gift from Natalie Portman after welcoming their first child, Willa, in July. The new parents took to social media to show off the book, which has a special meaning behind it!

Sophie Turner and Joe Jonas‘s daughter, Willa is just a few months old, but she’s already collecting gifts from her parents’ famous friends. The Game of Thrones actress, 24, and the “Sucker” singer, 31, took to their separate Instagram accounts on October 14, to share a sweet gift from Natalie Portman— a hardcover children’s book, titled Natalie Portman’s Fables.

Sophie and Joe shared a photo of the book to their Instagram Stories and tagged the actress to thank her for the gift. The book — that includes the children’s stories: The Tortoise and the Hare, The Three Little Pigs and Country Mouse and City Mouse — is set for release on October 20. So, 3-month-old Willa has early access to Natalie’s book before the world. No big deal.

Sophie and Joe welcomed their first child together this summer in Los Angeles, CA. The couple confirmed the happy news in a July 22 statement shared with HollywoodLife: “Sophie Turner and Joe Jonas are delighted to announce the birth of their baby.” Willa entered the world not long after Sophie and Joe celebrated their first wedding anniversary.

The couple and their little bundle of joy stepped out for the first time as a family in early September. Sophie and Joe were photographed on a stroll with their daughter in LA. Both stars were dressed casually and wore masks amidst the COVID-19 pandemic.

As for how they’re doing as first-time parents? — “They make a great team,” a source close to the actress told HollywoodLife, exclusively. “Sophie has adjusted to motherhood wonderfully and she is loving every moment of it… Joe has been a total hands on dad the entire way,” the insider revealed.

Joe and Sophie’s love story is something straight out of a modern day fairytale. The singer and actress began dating in 2016, after they were introduced by a mutual friend. Although, Joe hit up Sophie on social media prior to their first meeting. Joe proposed on October 15, 2017, and they showed off Sophie’s massive diamond ring on social media soon after.

Fast forward to May 1, 2019, when the couple tied the knot in a surprise Las Vegas ceremony after the Billboard Music Awards. Joe and Sophie opted for ring pops instead of wedding bands and their nuptials were officiated by an Elvis Presleyimpersonator. — But, the party wasn’t over.

In June 2019, Sophie and Joe jetted off to the south of France with their closest friends and family for a week-long wedding celebration. The lavish ceremony took place on June 29 at the stunning Château de Tourreau in Sarriens.