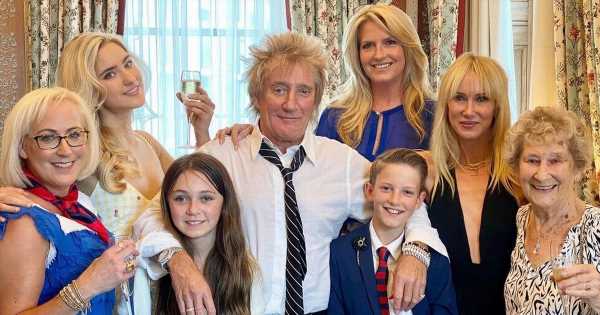 Sir Rod Stewart is set to welcome his second grandchildren later this year, with daughter Ruby announcing her pregnancy on Monday (2 January).

The music legend, 77, revealed the exciting news to his Instagram followers as he shared a clip, originally posted by mum-to-be Ruby, 35, of the unborn baby's gender reveal party.

In the clip, Rod can be seen opening up a piece of paper before exclaiming “It’s a boy!” much to the excitement of the parents-to-be and the gathered relatives.

The singer than went on to celebrate that they'll be welcoming another supporter of his beloved Celtic FC into the Stewart clan, singing: "Another winkle in the Stewart family."

He then continued his tune repeating: "Welcome to the Stewart family," over and over.

Sharing the clip to her Instagram story, Ruby joked: "Hire @sirrodstewart for your gender reveal! He will even write a custom jingle for your unborn child!"

Taking to her Instagram page, Ruby also shared a clip of her ultrasound scan, writing: "Out of all of the things that happened in 2022 you were by far the most beautiful…We can’t wait to meet you…Baby boy Kalick coming in April… "

Commenting on his daughter's post, Rod wrote: "So happy for the two of you," followed by a baby and green heart emoji.

Ruby's sister Kimberley joked: "Def has the Stewart nose," while their step-mum, Penny Lancaster, added: "Can’t wait to meet him."

Fans were also quick to comment on the sweet clip, with one writing: "How incredible!!! Congratulations on your miracle. 2023 is going to be the best year ever!!!" and a second joked: "He has Rod’s dance moves!"

Rod' has eight children from romances with four different women. With his current wife Penny, 51, he has two sons, Alastair, 17 and Aiden, 11.

His first child Sarah Streeter 59, was born when he and then-partner Susannah Boffey were teenagers and they gave her up for adoption. Sarah and Rod have since reunited with one another.

Later in life Rod then married actress Alana Stewart, with whom he shares two children, Kimberly, 43, and Sean, 42.

Following his split from Alana, Rod then embarked on a relationship with Kelly Emberg, with the couple welcomign daughter Ruby in 1987.

And with his second wife, model Rachel Hunter, Rod shared Renee, 30, and Liam, 28.