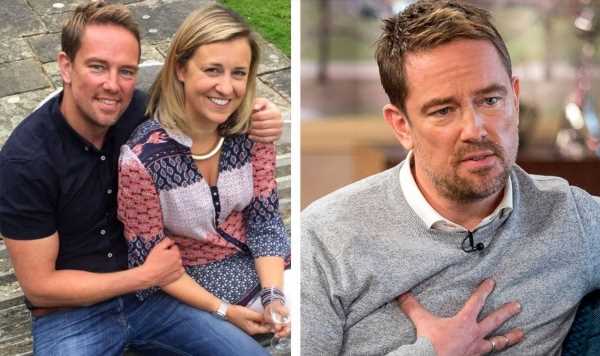 Former Blue Peter host Simon Thomas, now a popular sports presenter, was absolutely devastated when he lost his wife, Gemma Thomas, to a rare form of blood cancer that doctors had been unable to detect. Gemma sought medical help for fatigue, headaches and a bruise on her thigh, but her GP surgery told her she may simply have been suffering from stress.

It turned out to be acute myeloid leukemia – a cancer of the blood and bone marrow – and just three days later, after a visit to A&E in 2017, she sadly died at the age of 40.

She is survived by both Simon and the pair’s now 12-year-old son, Ethan.

The grieving presenter has since been an active campaigner to raise awareness of the dangers of the deadly, yet difficult to detect disease.

He is currently promoting a Blood Cancer UK competition which is offering the winner ownership of a £3 million house in Cornwall.

“If you go to pretty much any football ground across the UK there are signs in the men’s loos talking about prostate cancer, but I bet if I went onto my local high street right now, no one would know the symptoms for blood cancer,” Simon continued to The Sun.

He pointed out that the disease robs 15,000 people of their lives each year – and yet it is far less publicised than many other forms of cancer.

The symptoms, which were tragically missed in his wife, can include an unexplained rash, bruise or spate of bleeding.

Sufferers can also feel exhausted and breathless and experience drenching night sweats and pains in their bones.

Other signs to look out for include a sudden paleness of skin, swellings or lumps, itchy skin and unexplained weight loss.

After the sudden onset of severe symptoms for his wife, and then her subsequent death, Simon had required two years of bereavement counselling to help him get through.

His son, Ethan, also had a counsellor, who doubles as an actor and recently appeared in an advert the pair had seen.

“We’d seen him in a McDonald’s advert, but the other week I was watching the John Darwin Canoe Man drama and he was in that [too],” Simon recalled.

Once they had processed their grief and completed their two years of counselling, Simon then began his own journey towards helping others who’d experienced the same issues.

Ethan has assisted in raising funds for Grief Encounter – the same charity that had helped them.

Meanwhile, Simon shared news of some of the “heartbreaking” stories he has heard from other families.

“Inevitably when you go through what we have in public, people in a similar position message you and ask for your help or want to share their story,” he told the same publication.

“I think when you are in the public eye and open up about grief – or something that people find difficult to vocalise – people find a lot of solace in that.”

Simon also lost his father during the Covid-19 pandemic.

However, he is slowly working towards finding happiness and stability again after a tough period, and last year he remarried, as the presenter exchanged vows with lawyer Derrina Jebb.