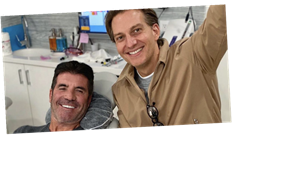 Simon Cowell has got himself a brand new set of veneers while recovering from his broken back following a bike accident.

The 61 year old, who was recently seen walking with his family for the first time since the horrific incident, showed off his pearly whites as he posed with celebrity Beverly Hills dentist Dr. Michael Apa.

According to TMZ, the Britain's Got Talent judge came into Dr. Apa's practice to get more natural looking teeth after feeling his own resembled something out of the hit TV series The Simpsons.

The star reportedly had older, temporary veneers removed as a source told the publication he brought a photo of his original veneers in for reference.

"Turns out, Simon was actually in need of a new set – we're told he was doing away with older, temporary veneers he'd been rockin' – but had one request… less Simpson-y and more streamlined," the insider said.

Dr. Apa took to his Instagram page to share two photos of Simon before and after getting his treatment done. In the first, the pair stand side-by-side as Dr. Apa places one arm over the dad-of-one's shoulder.

In the caption, he teased: "anyone else curious to see? arguably one of THE most talked about smiles in the industry. @simoncowell". [sic]

In the second, Simon's smile had a massive makeover as he could be seen with a massive grin on his face while sitting on the dentist chair and holding an American Idol gold card up for Dr. Apa's 513,000 fans.

It was captioned: "it official. i’m going to hollywood!! actually DUBAI THIS WEEKEND. and it truly is amazing working with amazing people. thank you @simoncowell for putting your trust in us." [sic]

It comes as Simon recently broke his strict vegan diet and is gaining weight to help him with his recovery after breaking his back, according to reports.

Despite giving up meat and dairy and losing 60 pounds in 2019, Simon, 61, has taken a break from his vegan diet and is putting on some weight, according to close friend Sinitta.

Speaking to The Sun, Sinitta, 52, explained: "I spoke to him last week and sounded so much better. He wasn't dazed, sedated or weak. He was really bright, happy and clear."

Going into more detail about his weight gain, Sinitta revealed: "He's gained a bit of weight and is looking healthier.

"He said he had to start eating protein, calcium and break his vegan diet to rebuild his strength."

The So Macho singer, whose pal's recovery is reportedly taking "longer than hoped", went on to agree with Simon's decision to ditch the vegan lifestyle in order to help his recovery. "That's the wisest thing. He was bloated and stressed, then he was too thin and exhausted," she said.

"Now he is fit and relaxed. He's found his sweet spot. He sounds relieved and exhilarated. The sea air is so healing and rejuvenating," Sinitta concluded.