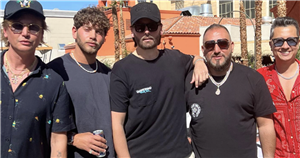 Scott Disick was pictured partying it up with Love Island star Eyal Booker on the day his ex Kourtney Kardashian and Travis Barker got married in Las Vegas.

The 38 year old was in the US state also as he enjoyed a “boyz trip” with Eyal and a group of others during Grammy weekend where there were several parties being held to celebrate the music event.

Scott posted a photo of the trip three days ago on Instagram which showed him stood next to the former Love Islander as he wore a black cap and T-shirt, cream shorts and white trainers accessorised with sunglasses and a flashy timepiece.

Eyal could be seen in the snap rocking his signature curly hairdo along with a similar outfit to pal Scott, swapping shorts out instead though for a pair of black trousers.

The reality star became close with Eyal after the pair both dated sisters, and daughters to Real Housewives of Beverly Hills star Lisa Rinna, Amelia, 19, and Delilah Hamlin, 22.

Amelia and Scott's relationship ended last year while Eyal and Delilah were reported to have called it quits in January.

Scott’s boys weekend comes as his ex and mother to his three children, Kourtney, married Travis Barker in a Las Vegas wedding with an Elvis impersonator officiating the ceremony.

The couple tied the knot a mere few hours after Travis performed on the Grammy stage in MGM Grand Arena, Las Vegas.

The pair married in a non-legally binding ceremony and are said to be planning “several” more marriage celebrations in the future.

Kourtney confirmed the Las Vegas wedding on Wednesday as she posted several photos from the intimate ceremony on Instagram with the caption: “Found these in my camera roll.

“Once upon a time in a land far, far away (Las Vegas) at 2am, after an epic night and a little tequila, a queen and her handsome king ventured out to the only open chapel with an Elvis and got married (with no license).