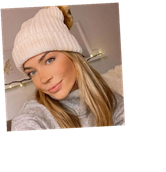 First, she came close to passing out during a rose ceremony, right as Matt James was getting set to finalize his selections.

Then… she quit the show!

As previously detailed, Trott took it upon herself to depart The Bachelor due to a combination of emotional exhaustion and familial responsibility.

At one point on the latest episode of the franchise, Sarah said she was “not cut out for this and I just can’t give this my all.”

Yes, of course she knew that she’d have to share James with other women — but knowing about such an arrangement and then living through it are two different things.

“All of my worst insecurities are coming out,” Trott added on air. “I really have to put my wellbeing first and I’m not in a good headspace here.”

The other major thing is that Sarah’s dad has been diagnosed with ALS.

“I just felt really called to go home and be with my family,” Sarah told Matt just prior to departing. “I just don’t think I’m ready for this.”

“I believe in the feelings with Matt,” Sarah added in a confessional. “We have a great connection, but Matt deserves the best and I just don’t feel my best.”

Sarah wasn’t exactly treated well by her fellow suitors on the way out the door.

They were angry that she got dizzy during the aforementioned rose ceremony and upset that she interrupted a group date on Monday evening.

“I hope that your connection with Matt is very strong right now,” Kit Keenan even told Sarah. “Because the rest of your living situation here is going to be horrible.”

Now, in the wake of her exit, Trott has something to say to these contestants, along with plenty of trolls on social media.

We see the quote “women supporting women” all the time on the internet but what does that really mean? she asked on Tuesday, adding:

To me, it means sharing encouragement instead of judgment. Refraining from negative comments even when it’s sometimes easier to say something mean instead of something nice.

It does NOT mean you have to pretend to like everyone always. That’s impossible.

But it DOES mean being a good person, keeping your head up and refraining from degrading another human being. You never know the internal battles another person is going through.

At the end of the day, please just be a decent, kind individual.

Elsewhere, Trott also provided fans with a message about her ailing dad.

ALS, also known as “Lou Gehrig’s disease,” is a nervous system disease that weakens muscles and impacts physical function; it can be extremely debilitating and, eventually, deadly for those it afflicts.

There is no cure.

“For the first time in a while my dad was up for a walk around the neighborhood lake.

“He doesn’t get a chance to get out of the house often because it’s such a difficult process now — getting dressed, getting strapped safely into our wheelchair van, you know how it goes…

“Things that once were so easy like putting on shorts, sunscreen, and hopping in the car for an adventure are much more difficult now.”

After the premiere, following Trott revealing her father’s diagnosis to James, Sarah thanked fans for their support, Tweeting:

“I’m blown away by the number of messages from those who have also been affected by #ALS.

“I feel honored to share my family’s experience on #TheBachelor and connect with others.

“Lots of love and encouragement for all the caregivers out there too.”