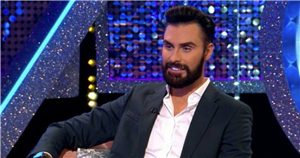 Rylan Clark has told his followers he had a scary moment when hackers tried to break in to his bank account and steal all his money.

The Strictly Come Dancing: It Takes Two presenter joked to his 1.6million followers that he is now "poor" and "needs help".

“Someone’s tried to get into my account ain’t they,” the 33 year old TV personality, who recently celebrated his amazing birthday bash at home, shared with his Twitter following.

Rylan then posted a GIF of comedy actress Kristen Wiig during a scene from her blockbuster smash film Bridesmaids – where her character Annie sits drunk on a plane.

“Help me I’m poor,” she tells the flight attendant in an iconic moment.

Fans flocked to the comments worried for the presenter, and many shared their own terrifying stories of scammers hacking in to their accounts.

One person posted: “Me too, had a scammer bank phone call good job there’s nothing in my account!”

“Sorry to hear that but had to mention that Bridesmaids is the best film ever!!!” another wrote.

A third fan exclaimed: “Nooooo! Hope they were blocked!”

While a fourth sad fan asked: “What is wrong with people?”

Others were also concerned for Rylan’s social media accounts, as one person admitted: “Why did I think you meant your twitter account before I saw the gif?

Despite the worrying turn of events, the It Takes Two host assured his fans there wasn’t too much of a disaster when he moved on to revealing some exciting news a few hours later.

Posting a Radio2 snap of his latest radio show figures, Rylan announced he had had a whopping 2.3million listeners during Saturday’s slot.

“Thank you so much,” he gushed next to a heart emoji.

For all your latest updates on Rylan Clark, sign up to OK!'s daily newsletter.