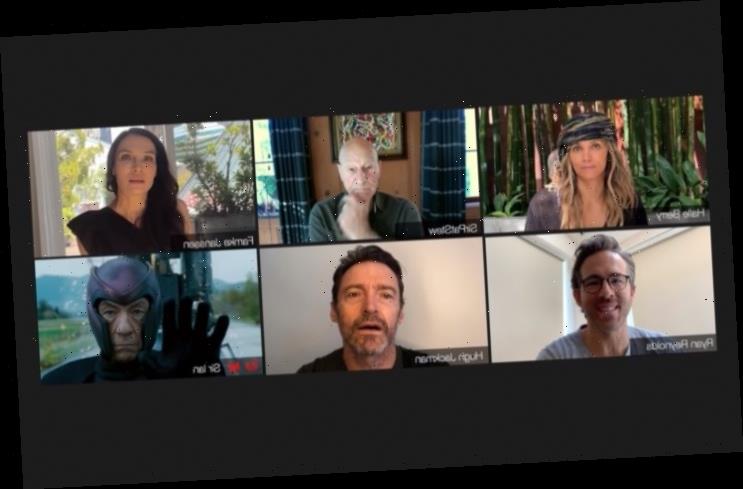 Hugh Jackman, Halle Berry, Famke Janssen and Patrick Stewart get together as part of the ‘Global Citizen: Unite For Our Future’ benefit before the ‘Deadpool’ star interrupts by inviting other stars.

AceShowbiz –Ryan Reynolds knows no boundaries when it comes to the “X-Men“. On Saturday, June 27, the “Deadpool” star gave the original “X-Men” cast excuses to leave their special reunion before it was even started when he unexpectedly interrupted their get-together by bringing in other stars from the franchise.

A part of the “Global Citizen: Unite For Our Future” benefit concert, Hugh Jackman, Famke Janssen, Halle Berry, Patrick Stewart and Ian McKellen met up on Zoom to reminisce their time on the franchise. “Honestly it’s kind of surreal you guys, I can’t believe it’s been 20 years since the first X-Men movie,” Jackman first told his co-stars.

Soon after, Reynolds popped in as he greeted, “Knock knock. Whoa, so many stars!” Jackman tried to politely push him out of the reunion by saying, “Ryan, the cast and I were all just reminiscing about the movie that we’re in together.” The husband of Blake Lively, however, pressed on, “I hope it’s okay I join. I figured we were all in ‘X-Men’ together…Actually, I invited a few others.”

Sophie Turner and James McAvoy, who starred in “X-Men: Dark Phoenix“, then joined in while Reynolds talked about the confusing timelines in the franchise. Turner, however, was quick to leave after claiming that she thought it was a “Game of Thrones” reunion. Her exit prompted the others to split as well.

Janssen was the first to say, “I actually have a James Bond reunion Zoom now.” It prompted Berry to tell the others, “Oh God me too.” McAvoy followed their lead by claiming, ” ‘Split‘ reunion,” whereas Stewart simply noted, “Star Trek,” before leaving Reynolds and Jackman as the last two stars online. Near the end, Liev Schreiber popped in for a brief seconds to declare, “X-Men Origins reunite!”

In a more serious note, Jackman celebrated those on the frontlines of the COVID-19 pandemic and those fighting against racial injustice. “Sometime in the not too distant future the hard work of every global citizen will bring about a healthier, safer, more equitable world. To all the first responders, essential workers and those fighting for racial justice: I stand in awe of your efforts this year and I stand with you,” he stated.