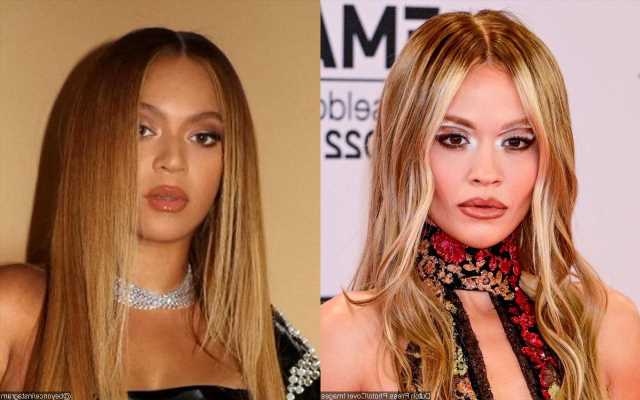 During her appearance on ‘Louis Theroux Interviews’, the ‘Let You Love Me’ singer is questioned about past rumors that she’s the one Beyonce’s referring to in her hit single ‘Sorry’.

AceShowbiz -It’s been six years but people are still curious about the identity of “Becky with the good hair” in Beyonce Knowles‘ hit single “Sorry”. Among several famous women who have been mentioned as the possible Becky is Rita Ora, who vehemently denies the speculations.

During her appearance on “Louis Theroux Interviews”, the “Let You Love Me” singer was questioned about being pictured wearing a “J” necklace not long after “Sorry” was released. At the time, she was also seen wearing a top with lemons printed, prompting fans to think that she took a subliminal shot at Bey over the track, which is about infidelity.

“Oh my god, it literally was a coincidence,” Rita said, adding, “I didn’t even think about it, I swear.” The wife of Taika Waititi went on to set the record straight about the necklace. “And it wasn’t a J, it was an R. They flipped it round and then it looked like a J,” she shared.

During the interview, Rita was also asked if she purposefully wore the outfit to create the rumors. “No, it had nothing… No, that was my own design with an underwear company called Tezenis that I was working with,” she explained.

“This is what I mean, man. A pinch of salt,” Rita continued. “You’ve got to take things with a pinch of salt. And that’s what’s insane. I had to just sit through that until a good friend of mine, Katy Perry, gave me a hilarious badge that said ‘not Becky.’ “

Back in 2016, Rita made use of her Twitter account to address the rumors. “I never usually address tabloid gossip but let me be clear, these rumours are false,” she wrote at the time. In a follow-up tweet, she added, “I have nothing but the utmost respect for Beyonce. Let’s continue enjoying Lemonade.”

The British star wasn’t the only famous woman who was suspected to be Becky. Gwyneth Paltrow, who is good friends with the Carters, was also rumored to be having an affair with Hov. Others believed it was Rachel Roy, Dame Dash‘s ex-wife.