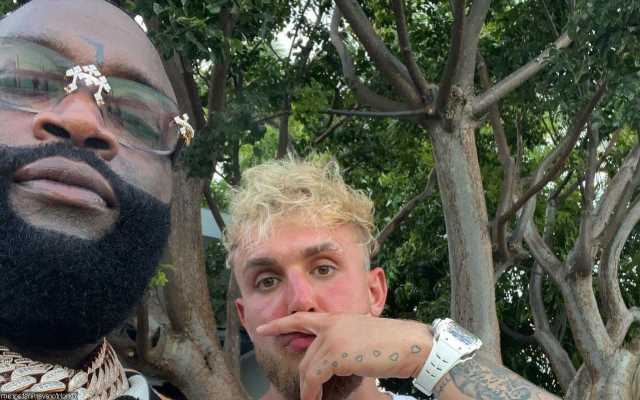 The 46-year-old emcee, whose real name is William Leonard Roberts II, makes the announcement via Instagram by posting a photo of himself and the YouTube star.

AceShowbiz –Rick Ross has made such an appealing offer. Taking to social media, the “Aston Martin Music” rapper pledged $10 million to secure an opponent for Jake Paul‘s next boxing match after several bouts were canceled for various reasons.

On Monday, August 22, the 46-year-old emcee shared on Instagram a photo of himself and the YouTube star. He captioned it, “Since everyone seems to be afraid to fight @jakepaul Im down to put another 10million on top to make the right match happen.”

“What fight would you want to see?” the Maybach Music Group founder, whose real name is William Leonard Roberts II, further noted. “We talking big shit on the homie podcast so stay tuned.”

The post arrived nearly one year after Jake announced his retirement from boxing. One day after beating former UFC champion Tyron Woodley, he declared on Twitter, “Updated status: Retired boxer.”

Jake, however, hinted that he would be up for a rematch with Tyron if the latter gets a tattoo of his name. In a separate tweet, he gave the guidelines for Tyron’s tattoo, including that it should be “3×2 inches at least” and should not get covered. The artwork has to be “permanent” and “has to be visible with shorts and shirt on.” He also demanded that Tyron posts it on social media.

Jake won against Tyron by a split decision, with scores of 77-75 and 78-74. Following the fight, Tyron admitted that he was surprised he was declared the loser. Confident that he will win if he’ll meet Jake in the ring again, he challenged the younger brother of Logan Paul to a rematch. “It’s done, we’re doing the rematch,” he told reporters at the post-fight press conference. “I have to get that win. It was too close.”