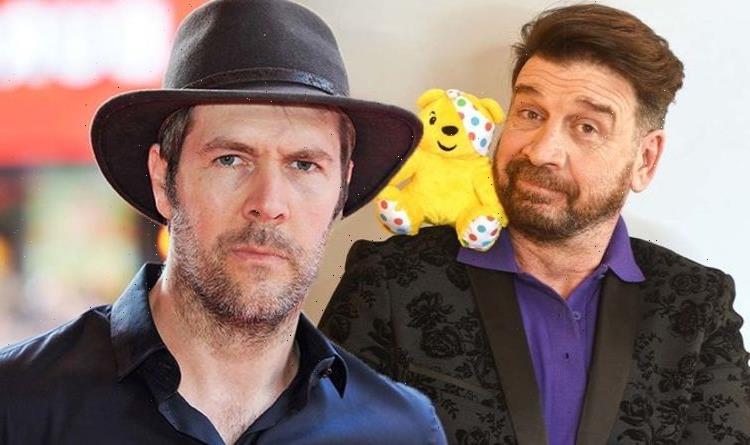 The One Show: Rhod Gilbert refuses to dob on rulebreakers

Rhod Gilbert, 52, will be stepping in to help gather a team of tradesmen and volunteers in Hull for a BBC Children in Need Special. The group will take on a build that will improve the wellbeing of children and young people in Hull and the surrounding areas.

They will aim to create a purpose built “adventure camping site” for St Michael’s Youth Project on an empty 2 and a half acre field.

Rhod has been announced as Nick Knowles’ replacement, after he confirmed earlier this month on This Morning that he would not be returning to the programme for the Children’s In Need special this year.

But according to the Work Experience presenter, some of his loved ones are “worried” about him filling in for Nick, who has hosted DIY SOS since 1999.

When asked about his family members’ reaction to his new role, Rhod told Express.co.uk in an exclusive interview: “I think they’re all chuffed.

“They all think it’s a great, worthwhile project to do.

“I think some of them are a little bit apprehensive of whether I can do it, you know, Nick’s been doing this for a long time and it’s not easy to step into somebody else’s [shoes].

“A role that he’s so at home with and he’s made his home, and the show is synonymous with him.

“So I think some of them are a bit worried about what I’ve taken on, but they’re cheering me on as well, they’re pleased for me.”

Nick has already offered Rhod some words of encouragement as he embarks on the upcoming build.

The presenter wrote: “I’m just missing one that they’re filming this September which is the Children in Need one.

“Rhod Gilbert has very nicely stepped in and there’s a real heart, real empathy, so I think he’ll do a great job.”

Rhod appreciated Nick’s words, adding that he will “hold the fort” until his return.

He told us: “I’ve seen Nick has tweeted me some good luck wishes and stuff, but I don’t know him.

“We’ve never met, but I know that he is cheering me on from the sidelines. I’m happy about that.

“The audiences love him, he loves the show, so I’m very aware that I’m keeping his towel warm.

“That’s what I’m doing, I’m holding the fort until he gets back.”

He said: “We are delighted to have Rhod join the team for this incredibly special build in Hull for St Michael’s Youth Project.

“We can’t wait to see him get his hands dirty, and we’ll need his humour and empathy as we transform an empty field into an adventure camping site that will benefit children and young people across Hull, for the Big Build BBC Children in Need Special.”