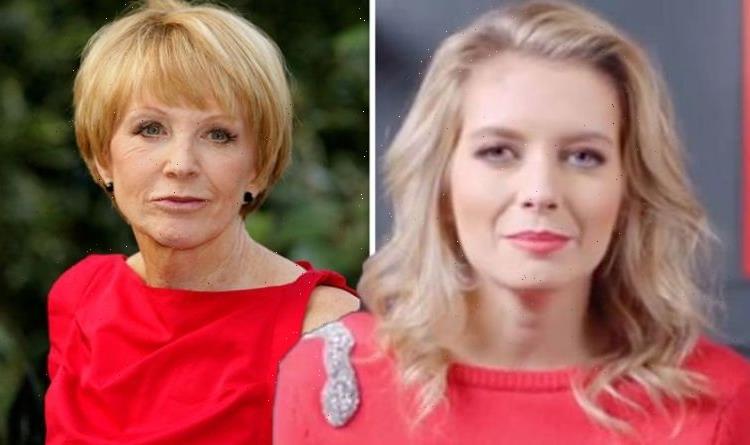 Countdown star Rachel Riley, 35, has opened up about Anne Robinson, 77, as she shared a backstage admission. The pair are regulars on the Channel 4 programme alongside Dictionary Corner’s Susie Dent.

The former Weakest Link presenter replaced Nick Hewer who stepped down from the role earlier this year.

Rachel gave a rare insight into life behind the scenes on the Channel 4 quiz programme.

The mum-of-two revealed that Anne often “banters” with contestants on the show.

Speaking to OK! magazine, Rachel said: “She found her feet very quickly and soon made the show her own.

“She’s comfortable bantering with the contestants.”

The Channel 4 star went on: “She asks them a lot of questions and we get to hear from them a lot more.

“She’s called out some comedians and you can tell they’re up for a fight. They come in with their lines prepared. She’s not known for suffering fools gladly.”

When asked if she is “more cuddly” off-screen, the star replied: “I don’t think anyone would describe Anne as cuddly.”

The small-screen star added that the Countdown presenter can be very “matter of fact” and shared they have been unable to socialise due to the pandemic.

While preparing for the show, Rachel revealed that the trio have separate dressing rooms.

The TV star, who is currently on maternity leave, welcomed her second daughter Noa on November 5.

Rachel said that her newborn arrived 15 days late as she shared the first photos of her bundle of joy.

She penned: “We have some news…!

“Introducing Pasha’s newest dance partner – baby Noa was finally born, 15 days after her due date, late on Friday night to the sound of fireworks!

“She’s totally adorable and her big sister Maven has already tried welcoming her to the world by offering Oatly and pickles, we think that’s a good sign.

“Massive thanks to the wonderful home birth midwives team and my doula who looked after us all so well.

“Ps thanks too to my namesake @rachelrileyuk for the lovely rainbow baby clothes for our gorgeous rainbow baby. Our family feels complete now she’s here.”

The 35-year-old already has an 18-month-old daughter called Maven Aria, with her husband Pasha Kovalev.