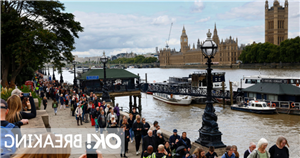 The queue to see the Queen Lying-in-State could be shut as the waiting time is reaching 11-and-a half hours.

Members of the public have been queueing up to pay their respects to the late Monarch as her coffin lies in Westminster Hall.

The Queen passed away aged 96 on Thursday, 8 September after an incredible 70 year reign.

The colossal line of mourners has reached Southwark Park, prompting a warning that the queue could be "paused" if the line keeps getting bigger.

The Department for Digital, Culture, Media and Sport said if the park reaches capacity, "entry to the queue will be paused".

According to the DCMS' online tracker, the queue is currently 4.9 miles long.

In a Twitter post, it added: "If you have not yet set off to join, please consider waiting until numbers have reduced."

The queue was first opened to mourners at 5pm on Tuesday, following the Service of Thanksgiving for the Queen's Life, which was attended by members of the royal family, including King Charles III, Prince William and Prince Harry.

Some members of public wishing to pay their respect to the Queen had camped out in London in a bid to beat others to the front of the queue, and when it first opened, the line stretched 2.5 miles all the way to London Bridge, and was three miles long by the following morning.

The queue stretches across Albert Embankment and along Belvedere Road behind the London Eye, reaching South Bank where it follows the Thames past the National Theatre, the Tate Modern and the HMS Belfast, before passing under Tower Bridge and along to Southwark Park.

Extra transport services have been added to support the influx of people travelling to London to pay their respects, including trains.

The Queen will Lie-in State in Westminster Hall until 6.30am on Monday, 19 September, before her funeral takes place at Westminster Abbey later that day.

The beloved Monarch "passed away peacefully" aged 96 on 8 September at Balmoral Castle in Aberdeenshire.

Her coffin was then driven six hours to Holyroodhouse in Edinburgh before it was taken in procession to St. Giles' Cathedral, where it Laid-in-State for 24 hours so that people in Scotland could pay their respects.

Her Majesty's coffin was then flown from Edinburgh to London on Monday before arriving at Buckingham Palace where it was received by members of the royal family.

On Tuesday, the Queen's children, King Charles, Princess Anne, Prince Andrew and Prince Edward, along with her grandsons, Prince William, Prince Harry and Peter Phillips all joined a procession as the Queen's coffin was taken to Westminster Hall.