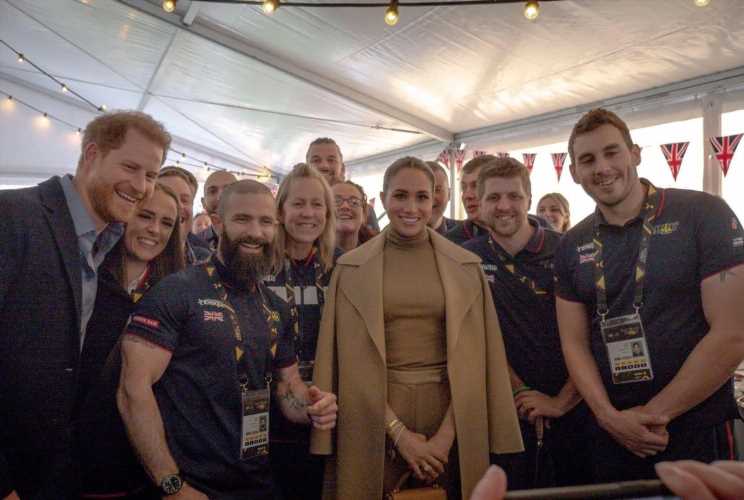 This ^ photo comes from the British embassy in the Netherlands. The British ambassador has been on the ground in the Hague for the Invictus Games. On Saturday, the Duke and Duchess of Sussex attended the welcome reception for the Team GB competitors. Meghan is all about monochromatic looks, so she did all-beige for this appearance. The coat and pantsuit/set are Ralph Lauren. What I love most of all is that the British Invictus team truly gathered around Meghan as the centerpiece and NOT Harry. Harry was over in the corner of all of these photos. It feels like even among the British Invictus team, Meghan is the one people want to meet and hang out with most of all.

The Duke is Patron of the Games, which he started after witnessing the power of sport in helping wounded service personnel in their recovery@InvictusGamesNL @HelpforHeroes #IG22 pic.twitter.com/KTq70XDi7h

Harry and Meghan spent most of Friday and Saturday doing these kinds of appearances with individual teams, receptions and the like. When they met with Team Australia, the Aussies gave Harry a special gift: budgie smugglers, aka Speedos. The Aussies clearly believe that Harry is one of them, they love him.

Follow our socials, and head to ABC iview for Invictus updates and daily highlights.#IG22 #InvictusGames pic.twitter.com/hq61T0u2gY

And in addition to all of the other receptions and appearances on Friday, Harry and Meghan also spent a lot of time with the American team and the American delegation, including Secretary Pete Buttigieg and Sen. Tammy Duckworth. Wow, it certainly seems like Meghan and Harry are massively successful soft-diplomats. It’s such a shame that jealousy, racism, colonialism, misogyny and pettiness “won” over charm, hard work, charisma and empathy.

Photos courtesy of the White House, the British embassy in the Netherlands, Backgrid and Avalon Red.