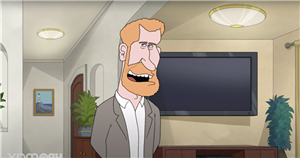 Prince Harry knew that his neighbour Orlando Bloom would portray him in new cartoon The Prince, the show's creator has hinted.

The controversial cartoon has been criticised for coming "too close to the line" as it follows a fictional version of the life of Prince George, and makes digs at various members of the Royal family.

The Duke of Sussex, 36, is played by his real-life neighbour Orlando, 44, and is seen being confused about the "tiny apartment" he has moved into with wife Meghan Markle.

Despite not speaking publicly on the show, which airs on HBO Max in the US, the show's creator Gary Janetti has hinted that Harry is fine with it.

Gary spoke on Watch What Happens Live with Andy Cohen, saying: "I don't know if Harry has said anything to Orlando about it, but I know before the show premiered, he was aware that Orlando was doing it."

Orlando has also spoken in defence of the animated series, telling The Hollywood Reporter: "It's not malicious or intended to be.

"Actually Katy saw one bit of it and was like, 'You've got to do this. This is genius'.

"And the animation is done by some of the guys who did Family Guy, so it's going to be very amusing. And who doesn't love the royal family?"

He separately spoke to The Telegraph, saying the show is "actually quite tender."

When asked what he thinks the Royal family would think of the show, he said: "I don't know. If they appreciate satire, they might [enjoy it]…

"It's quite tender, actually – my character with George, it's a really lovely relationship. It's not as mean as people think."

One friend of Meghan's, Omid Scobie, recently blasted the show, writing on Twitter: "Royals have been parodied on dozens of shows over the years (Spitting Image, The Windsors, SNL etc) but this is the first time I can recall children being targeted.

"It may be 'comedy' but it comes across as creepy and borderline-bullying. Seems like many of you feel the same…"

He further illustrated his point by sharing screenshots of other tweets including "Kids should be off limits" and "I don't care for the family members that are still on that little island, but this is wrong on so many levels. Leave children alone. PS. Harry and his family live in an estate not the tiny apartment that ya'll wish."

For the latest on Prince Harry and the rest of the Royal family, sign up to OK!'s daily newsletter.