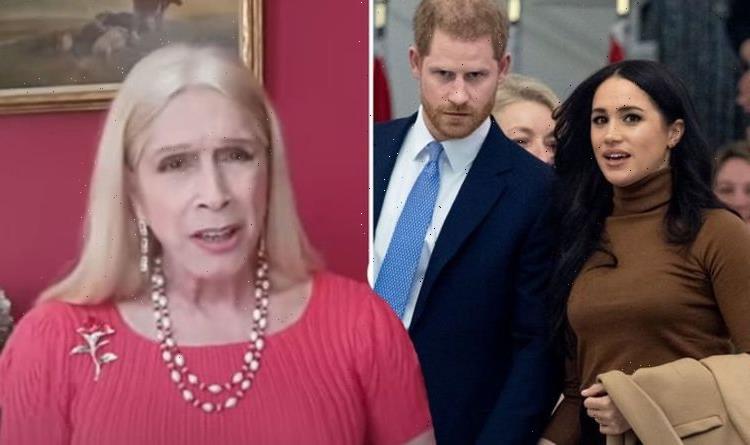 Lady Colin Campbell, who has published eight books about the royals, said she had watched some of the clips from Lifetime’s movie and wasn’t impressed. “I had the distasteful experience of looking at some of the clips,” the 72-year-old said, laughing.

The socialite likened the show to demanding 300 million dollars from a lottery supplier, insisting it had a slim chance of being real.

She continued: “What I found really distasteful was the imagined scene of Harry dreaming that Meghan is going to be dying the same way as [Princess] Diana.

“Is there no depth to which these people won’t seek? Is there no stone that they won’t turn over as the worms wriggle?

“And to believe this involves a member of our royal family?,” she added, followed by a silent sign of the cross.

Lady C shared her thoughts in a Q&A with fans on her YouTube Channel.

In response to another viewer, she said she imagined Prince Harry and Meghan were driven “crazy” by stories written about them.

Harry & Meghan: Escaping The Palace dramatises the events that led the pair to step down from their royal duties last year.

It’s the network’s third movie retelling of the couple’s life as royals.

The first instalment in the franchise in 2018, the year they tied the knot, which focused on their romance.

The following year, they released a sequel which focused on Meghan adjusting to royal life.

In March 2020, they stepped down from their senior duties and later moved to Los Angeles.

Their departure from the family prompted many to question the real reason behind their decision.

Earlier this year, Meghan and Harry shared their version of events from the Palace in an interview with Oprah.

In one of their biggest bombshells, the pair claimed an unnamed member of the family had concerns about their son Archie’s skin colour.

Prince Harry also said he felt “trapped” in the system, while Meghan said she felt suicidal.

The ex Suits star claimed she sought help for her mental health from the Palace, but this was apparently denied.

In respose to their claims, a statement from Buckingham Palace read: “The whole family is saddened to learn the full extent of how challenging the last few years have been for Harry and Meghan.

“The issues raised, particularly that of race, are concerning.

“While some recollections may vary, they are taken very seriously and will be addressed by the family privately.Harry, Meghan and Archie will always be much loved family members.”