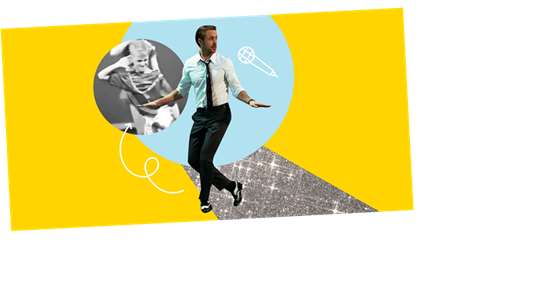 Okay, so we all love, adore, and ship ourselves with Ryan Gosling, right? You probably first set your eyes on (and became obsessed with) Ryan back in 2004 when he starred in The Notebook opposite Rachel McAdams and rightfully so, because anyone who builds a WHOLE-ASS HOUSE for the love of their life deserves all the heart-eye emoji. But did you know that just 12 years earlier in 1992, Ryan was already causing tween girls to swoon not through his acting skills but through his singing and dancing abilities??? In honor of Ryan’s 40th birthday today, allow me to fill you in.

Before getting his big break on Disney Channel’s The Mickey Mouse Club—aka the show that launched Justin Timberlake’s, JC Chasez’s, and Britney Spears’ careers—Ryan Gosling used to kill it back in the day with his dance moves at talent shows. And lucky for us, there’s vintage VHS video to prove it.

Please direct your eyes to this ICONIC video of baby Ryan dancing and womanizing his lady friends…in silver drop-crotch harem pants, no less!

The confidence. The sass. The ~charisma~ of a budding star! It’s all too much for my heart to bear. You gotta have the guts to be the only guy performing with a large group of girls, but from what I can tell, yung boi Ryan was completely unfazed. Clearly, he was destined for this life. Oh, and if you thought the silver harem pants were cute, here he is dancing in even baggier purple ones. Joy!

If these two videos mistakenly made you think Ryan could only dance to ’90s house music, you’d be extremely wrong! Yung boi Ryan also had the MF range and was talented enough to switch between different dance styles with ease. But is there proof though? you ask. Well, YES, THERE IS!

Here’s Ryan dancing like an absolute pro to “Do You Love Me?” by The Contours. Sadly, no harem pants featured this time, but Ryan is still charming the figurative pants off these ladies!

Fast-forward one year later (1993), Ryan nailed his audition and secured his spot on The Mickey Mouse Club. Ryan got less screen time than his fellow Mouseketeers because the producers thought he wasn’t as talented as the others (obviously, they were wrong!), but he did stay long enough to join in on the show’s musical performances.

Ryan even started singing panty-dropping hits on the show that’d make you think Disney After Dark was a real thing, because Ryan, alongside Justin and JC, had tweens everywhere screaming, crying, and salivating with their song “Cry for You.”

Brace yourself, because you will be feeling all of the feels:

The pipes on this boy! The soul! The passion!!! It’s honestly a shame that Ryan didn’t continue singing on a regular basis because he is So. Damn. Good. So good, in fact, that he was offered a chance to be a Backstreet Boy by actual Backstreet Boy AJ McLean. Unfortunately, Ryan declined, but think of how different this world would be if Ryan Gosling were part of The Backstreet Boys! I’ll give you several minutes to spiral.

Looking back on Ryan’s past really gives perspective on his career. Had Ryan not danced his little heart out in those talent shows and sang to the heavens on The Mickey Mouse Club, would we have the masterpiece that is 2016’s La La Land? Honestly, I don’t think so!

In short: God bless the gorgeous hunk of man that is birthday boy Ryan Gosling and all the talent-filled bones in his body. He is the gift that keeps on giving!