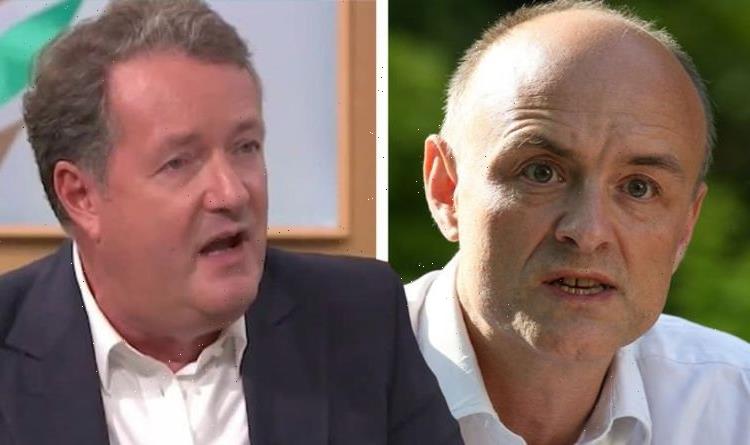 Dominic Cummings on plan to 'get rid' of Boris Johnson

Piers Morgan, 56, ripped into former chief advocate to the Prime Minister Dominic Cummings, 49, as the two engaged in a late night Twitter spat. The Good Morning Britain star branded him “gutless and pathetic” as they discussed the Government’s boycott from the ITV show.

We all had better things to do

Former Health Secretary Matt Hancock broke the 201-day Government boycott of GMB after he appeared on the breakfast programme in November last year.

On Tuesday evening, Piers reacted to footage of a Sky interview with Cummings, where he called his former boss Boris Johnson, a “joke” after he was asked about the Government’s response to the coronavirus pandemic.

Tweeting his views, he penned on the social media site: “REMINDER: it was Cummings (and his Muttley, Lee Cain) who ordered the 8-month ban on ministers appearing on @GMB because we were holding them to ferocious account for all the deadly mistakes they were making last year in the pandemic.”

Cummings, who resigned from his position as Mr Johnson’s advisor back in November, replied: “I banned them cos we all had better things to do, like control the fkd, than waste our time on a vain tool shouting angry soundbites and calling it ‘news.'”(sic)

Clearly no love lost between the pair, their fiery debate drew in the attention from fans as Piers hit back with a slight to the nature of Cummings’ “misdemeanours” during lockdown.

“a) I don’t think you’re in any position to throw around the ‘vain tool’ slur,” he retorted.

“b) Good to see you finally admit you stopped me holding ministers to proper account for their failures that cost 1000s of lives.

Cummings made headlines after he made a 260-mile trip during the height of the first lockdown in March, after his wife displayed Covid symptoms.

He was later spotted 30 miles away visiting Barnard Castle, claiming he was “checking his eyesight” was good enough to drive home.

Elsehwere, away from his Twitter wars, Piers paid tribute to his parents’ beloved dog Kezzy.

The journalist took to Instagram on Tuesday to share the sad news of his family pet’s death, at the age of 14, with his 1.8 million followers.

Sharing a photo of Kezzy, Piers admitted “she will be missed by all of us”.

In the adorable picture, Kezzy could be seen sitting on a comfortable chair in the kitchen, while gazing up at the camera.

“She will be greatly missed by all of us.”

Piers was inundated with comments from his followers, who sent him and his family their condolences following the tragic announcement.

Another fan added: “So hard to lose a beloved member of the family.”

Someone else commented: “Poor baby, so sad, what a beautiful dog.”