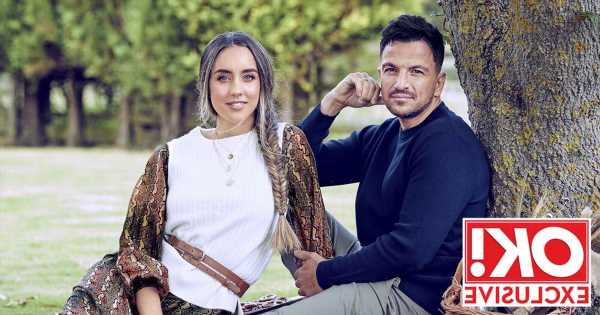 As he gears up to celebrate 30 years in showbiz, it feels only right that we mark this milestone by chatting to our longtime celebrity columnist, Peter Andre. He has been part of the team since we signed him up for an I’m A Celebrity… Get Me Out Of Here! column in 2005, a year after he appeared on the show.

With Pete’s inside knowledge of the jungle, we reckoned he’d be the perfect person to give readers an insight into coping with life in the camp. Needless to say, we loved working with him – so once the show ended, we decided to keep him on as a regular columnist. And the rest, as they say, is history.

We’ve been through a lot with our pal Pete over the years. We saw the star tie the knot for the first time and then the breakdown of that marriage, during which he confided in us every week as he came to terms with the split. Our readers offered him their unwavering support as he adapted to life as a single parent to his eldest children Junior, now 17, and Princess, 15.

It wasn’t long before Pete was off the market, though, and we were so happy to witness him falling in love again – this time with Emily MacDonagh, who was then a 20-year-old medical student. In unconventional circumstances, Pete met Emily, now 33, through her father, a doctor who operated on him to remove kidney stones.

But after getting to know Ems, who is also now a doctor, Pete was smitten and the two are happily married and devoted parents to Amelia, eight, and five-year-old Theo.

It’s been a privilege to have Pete’s column for the past 17 years and here, the 49-year-old reminisces over the highs and lows of his time with us, and reveals what his column means to him…

Hi, Pete. Can you believe you’ve been our columnist for 17 years?

I really can’t. If someone had said to me all those years ago that I’d start writing a column with a magazine that would continue for almost two decades I would never have believed you. I feel so honoured. If I’m not the longest-standing columnist for any magazine ever, I’ll be really surprised!

Do you feel like you’ve changed a lot since you started writing for us?

Of course. I’ve gone through so many things during my years with the magazine that have allowed me to grow and adapt as a person. I’ve welcomed five children and gone through two marriages – as well as having seen six Prime Ministers in power, a Queen and King, and a global pandemic. So my views and perspectives on things have naturally evolved. I’m grateful that OK! has allowed me to express these ever-changing views.

Which of your personal highs have you enjoyed sharing with our readers over the years?

The fact that I’ve become a father of five during my time with OK! is mind-blowing. I’ve loved sharing my journey into parenthood with my readers, because I really do feel like I’ve built an important relationship with them. And meeting my beautiful wife Emily was another huge high. I remember desperately wanting to talk about her in the column when we first started dating but I had to keep it on the down-low!

Since then, we’ve married and have started our beautiful family together. She brought Amelia and Theo into my life and she’s the most incredible stepmum to Junior and Princess. Oh – and selling out The O2. I’d be lying if I said that wasn’t one of my proudest moments!

What was your lowest point personally during your time writing with us?

I think writing during the coronavirus outbreak was a trying time. Trying to keep readers’ spirits up when mine was just as low as theirs was hard work, but the hard times passed. Since that period, I believe the world has become stronger in the face of hardship. The loss of Her Majesty this month has also had a huge impact on not only myself, but on my family and the wider world. We’re all connected to her in some way. She wasn’t just the Queen, she was a mother, a grandmother – even a great-grandmother – and it’s been hard to say our goodbyes.

You’ve opened up about your mental health battles. Does your column feel like therapy?

Yes. Being able to express myself on a weekly basis has worked wonders for my wellbeing. When I started writing in 2005, there were certain things that I didn’t feel I could open up about. But I slowly learned that a problem shared really is a problem halved, so I try to be as transparent as I can be in my column. I open up about those recurring moments of doubt so that somebody reading could think to themselves, “Oh, my God, that’s how I feel.”

If my column can help one single person, I’ll be happy. It’s incredible that new has given me this platform to spread awareness of the importance of breaking down the taboos of mental illness.

Do Junior and Princess enjoy reading your column?

They love it. They’re often sitting with me while I’m writing it, so I’ll read something out loud about them and they’re like, “Dad, no! Change it so it sounds like this.” It’s funny but I love their insight.

Junior is doing amazingly. He has recorded his second single after the success of his debut song, Slide, and they’re currently developing the music video. The release date for that will be announced soon. Even though I’m his manager, I want to let him find his own feet in this industry. I’m always there offering advice whenever he needs it. I’m so proud of all the hard work he’s putting into this. He’s going to make some magic.

And does Princess have any career plans yet?

She’s got the most incredible voice – really. I love to hear her sing. But I think she wants to go into the fashion world, which is really exciting. She’s got a real eye for style.

Do you think you and Emily will have more children?

We do talk about it all the time, but one minute we’re a “yes”, and the next we’re a “no”. We love the idea of having one more child, because the two we have together are the most amazing kids – but that thought usually lasts until we see other people with screaming babies! I don’t know. Maybe Junior will be bringing our grandchild to visit in the next 10 years. Ha!

Do your parents read your column over in Australia?

They read some of it here and there whenever they come to visit but I really should start sending some copies over to Oz – I don’t know why I didn’t think of that! I usually just tell them everything I’m going to write about over the phone. That reminds me – back in the 90s, Victoria Beckham’s mum Jackie [Adams] used to send my mum stories from magazines when I was in the UK, and my mum would send Jackie stories about the Spice Girls in Australian magazines. How crazy is that?

Talking of Oz, you recently mentioned your plans to visit your parents there soon. Are they excited to have you going back over there again?

Absolutely. [Pete’s stage show] Grease comes to an end in October and then my film wraps up in November, so as soon as those two are ticked off, we’re going to head over as a family. I need to see my mum, as she’s not doing too well at the moment. My dad is 89, but I’m much less worried about him than I am Mum. Dad is still rocking it but Mum needs a helping hand.

Will you be sad when your stint in Grease ends?

Definitely. We’re like a little family and it’s just such a fun show. Those songs will just never get old, no matter how many times you listen to them over and over again. Every time Grease Is The Word comes on, my feet start tapping. I’m going to be gutted to say goodbye.

And you’ll soon be celebrating 30 years in showbiz. Do you have any big plans?

Wow… it feels fantastic to even hear it said. Thirty years ago, I released my first single in Australia, called Drive Me Crazy, which is mad because 30 years later to the exact month, Junior released his first single. As well as preparing to release my new album, we’ll also be celebrating next year with five dates touring a new show, which is going to be an incredible evening. It’s not quite a comedy, and it’s not quite “An Evening With…”, but it’s a mixture of everything with a load of interaction with the audience. It’s something that I’ve never done before that will allow me to celebrate my years in the industry with the people who have joined me on my journey. We’re going to have a party!

Buy tickets to Pete’s 30 years in showbiz celebration at peterandre30.com