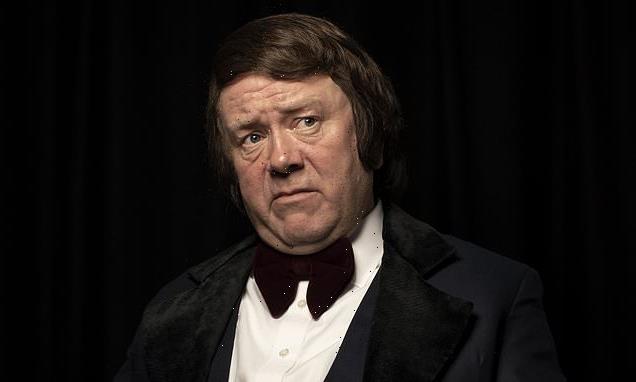 Don’t tell the mother-in-law! Les Dawson is back – or at least his Dead Ringer is: PARTICK MARMION’s Edinburgh Festival Special

The show is all the more remarkable because Dawson was the kind of old-school 70s stand-up reviled by the comedians who form today’s Edinburgh Festival establishment.

His name is almost taboo for them — but not, it seems, for Culshaw.

Here, he makes his hilarious entrance as Dawson to the triumphant sounds of Richard Strauss’s Thus Spake Zarathustra (played by a disintegrating colliery band); resplendent in a double-breasted tuxedo with flares like mainsails and a velvet bow tie — not to mention a pair of glossy black sideburns and a luscious wig, somehow combed in all directions at once. 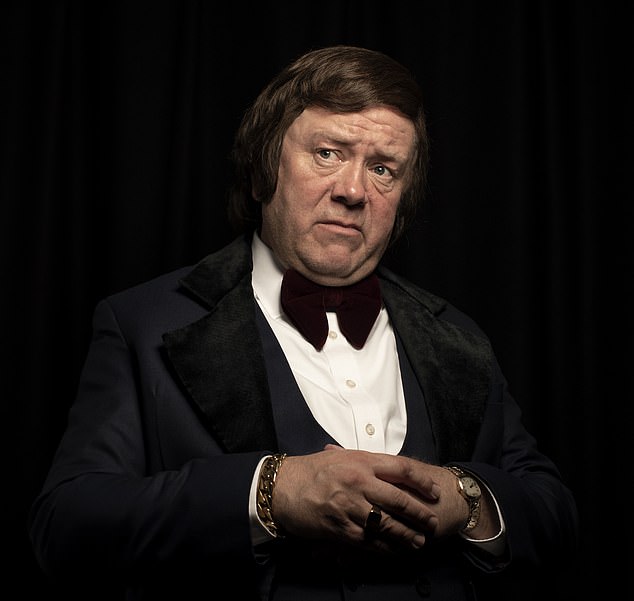 Tim Whitnall’s saucy script takes us back to Dawson’s childhood, growing up in working-class Collyhurst in a house so tiny ‘the fleas on the dog didn’t jump for fear of concussion’.

We learn that as a young man he had ambitions of becoming a novelist, which he pursued in Paris, earning his keep playing piano in a knocking shop.

Rebuffed by literary editors, he was later also rejected by BBC executives for being ‘too deadpan’.

It wasn’t until Hughie Green (how it all comes flooding back) featured him on Opportunity Knocks that he became a household name.

These reminiscences occur during the show which imagines Dawson writing an autobiography while on board Concorde, heading to New York.

We’re treated to a welter of antique gags, including the mother-in-law numbers that were his mischievous trademark (‘I didn’t speak to her for six years . . . well, I didn’t like to interrupt’).

Dawson’s voice is immaculately rendered, with Culshaw putting the gutter into that guttural Lancashire gurgle.

Podgy hands rest contentedly (fingers steepled) on his Watney’s beer-barrel belly, and his rubbery face is lit with that rueful, inscrutable smirk that was half smile, half trapped wind.

Culshaw wisely doesn’t attempt to pull his lower lip over his nose, as Les was able to do.

But he does interact with other pre-recorded characters played by Dawson — including the old ladies discussing their husbands’ plumbing — while throwing in a touch of David Frost and a moment of Hughie Green.

These scenes are cut in on a giant cartoon telly fitted with a swivelling tuning switch — a monument to analogue technology, much like Dawson himself.

What a joy it is to have him back. And if you can’t catch him in Edinburgh, look out for him on a UK tour this autumn (for details visit socomedy.co.uk).

What The Heart Wants is another impersonation comedy in which filmmaker Woody Allen is visited by a baseball bat-wielding Frank Sinatra, the first husband of Allen’s ex-partner Mia Farrow.

The crooner means to beat the hell out of Allen after hearing about his relationship with Farrow’s 21-year-old adopted daughter Soon-Yi. 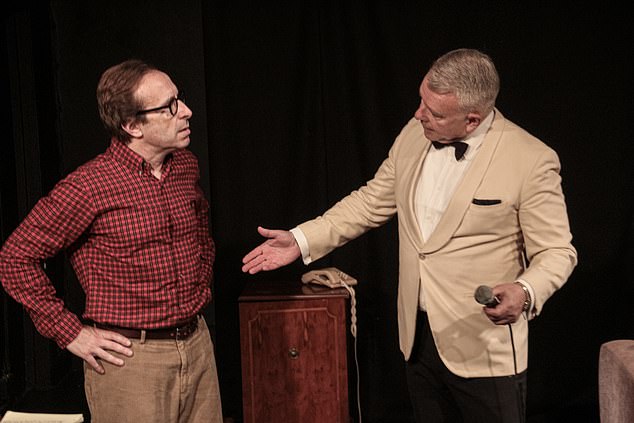 You’d have thought accusations of inappropriate relationships might be a poor basis for a comedy, but Bert Tyler-Moore’s play swerves all that by paying homage to one of Allen’s best known films, Play It Again, Sam (in which he’s visited by the ghost of Humphrey Bogart).

The set-up does eventually get a bit laboured, but Simon Schatzberger has the neurotic Allen down to a nasally ‘T’, nervously adjusting his specs, stuttering like a car with damp spark plugs and gesticulating like he’s trying to activate a hands-free tap.

Richard Shelton’s Sinatra is a slightly more rounded doppelganger, in every sense; offering Raymond Chandler-ish one-liners and crooning like Ol’ Blue Eyes, too.

When he launches into New York, New York, just close your eyes and you’ll find yourself on Fifth Avenue.

Mess with murderous Medea at your peril

The most visceral and gut-wrenching performance at this year’s International Festival is surely Michael Boyd’s revival of Euripides’s ancient Greek tragedy, adapted in 2000 by Scotland’s leading laureate Liz Lochhead.

Be warned, though, this is a broadside from antiquity in which the scorned wife of Jason (he of the Argonauts) decides to take revenge on her husband by butchering their children.

As a black woman with an English accent, Adura Onashile’s Medea is spurned by the white, Scots-accented Greeks, after Jason decides to ditch her as his wife and marry instead the daughter of Creon, King of Thebes.

Medea is especially bitter, because she helped Jason make his name on his legendary expedition to procure the Golden Fleece. 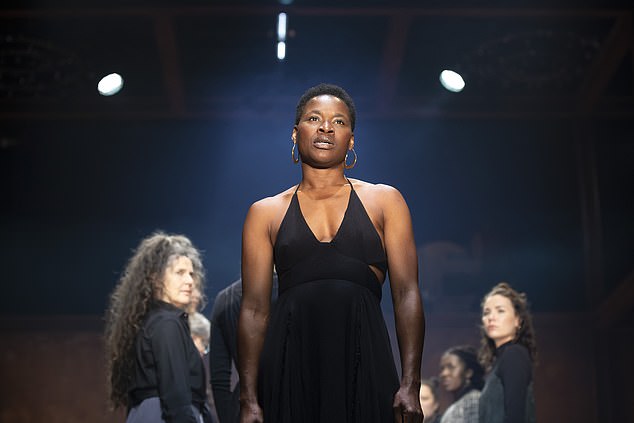 Resolving to kill her children ‘to prove her love’, the logic of Medea’s position in Lochhead’s adaptation is not always watertight.

But what is undeniable is the brilliance of Onashile’s ferocious performance.

Thoughtful, wily and tender, too, she has an impressive vocal technique, pitching and spinning her lines like weapons.

What is perhaps missing from Lochhead’s earthy, feminist account peppered with four-letter salvos, is the way Euripides makes the infanticide seem inevitable.

Onashile brings the physique of an Olympic athlete and the poise of Grace Jones to her Medea, while Boyd matches her gutsy performance with an elemental production set on a catwalk backed by rusting iron girders.

Gongs and tubular bells are struck, periodically, to add a sense of percussive doom.

A chorus of Glaswegian ‘women of all time’ mingle in the audience to offer sisterly solidarity and rueful Scots humour, as well as pleas for Medea to show restraint.

Also impressive is Robert Jack as Jason, whose voice of peat smoke and whisky collapses into grief when he pays dearly for discarding his children’s mother.

By the way, this is a so-called ‘promenade’ production, which means you’re on your feet (with only a smattering of seats for those who need them) for 80 minutes in this venue’s sweltering heat.

It’s a testament to the show’s power that I barely noticed.

BEST OF THE REST

Mind Mangler is the brilliant creation of Henry Lewis and Mischief Theatre company, which specialises in plays that ‘go wrong’.

Imagine a Derren Brown spoof from a man who proudly proclaims he’s a signed-up member of the ‘Tragic Circle’ and believes his senses are different to ours… ‘I can taste your name and smell your job,’ he purrs, as he attempts to read our minds.

What I’m thinking is that Lewis is a big guy with a rich voice, who is only going to get bigger and richer.

And he is ably assisted by a subversive Scouser (Jonathan Sayer).

But the really cunning trick up Lewis’s sleeve is that some of his routines actually work — including an alarming game of Russian roulette with a broken bottle.

Rosie Holt sprang to fame during lockdown with her online spoofs of phoney politicians.

Here, she branches into character sketches, changing costumes out of a suitcase on stage.

Look out for Liz Truss (complete with Boris wig and Thunderbird puppet arm movements), as well as a coke-snorting North London Lefty, and Russell Brand spouting gobbledygook. An amiable 60 minutes.

Conrad Koch is a South African ventriloquist whose puppet, ‘Chester Missing’, is the spit of William Hague.

In his native SA, Chester has interviewed politicians on telly; but over here, master and servant (Chester and Koch) are a little too polite about our politicians, while their racial awareness comedy is more grounded in the South African experience.

Genial and wry, rather than cutting or risque, Koch is good at his voice projection and even close up in this tiny venue I struggled to see his lips move. 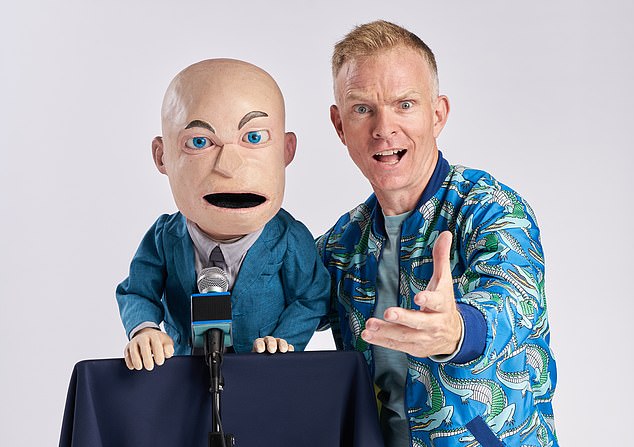 Conrad Koch is a South African ventriloquist whose puppet, ‘Chester Missing’, is the spit of William Hague

Nine Circles is one of the best performances on the Fringe, but it’s also one of the most harrowing.

It’s about a Texan GI in Iraq facing the death penalty for horrendous war crimes — because he insists on pleading guilty.

The point of Bill Cain’s drama, tautly directed by Guy Masterson, is to illustrate the disturbed logic of Post Traumatic Stress Disorder, and also raise questions about moral responsibilities in war.

A game of cat and mouse in which the GI toys with those trying to help him, does not end well. How its star, Joshua Collins, puts himself through this every day is beyond me. 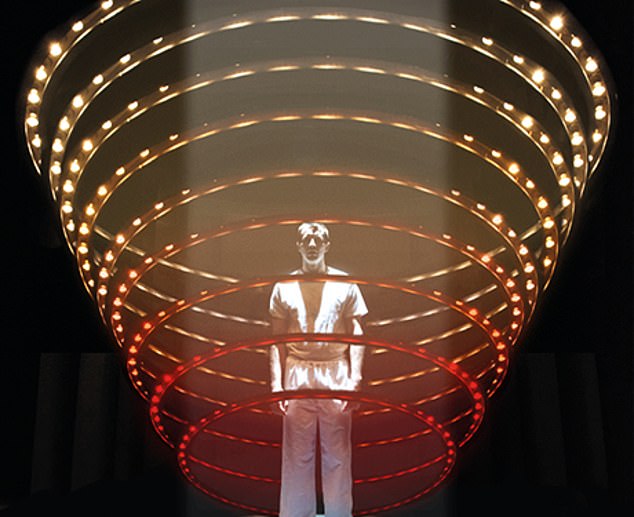 The point of Bill Cain’s drama, tautly directed by Guy Masterson, is to illustrate the disturbed logic of Post Traumatic Stress Disorder

Blood Harmony is the sweet story of three grown-up Essex sisters mourning the death of their mother.

There is the carer, Chloe; the wastrel Maia; and the upwardly mobile Anna, now a business consultant in the US.

But there are also bittersweet ballads by The Staves (Sadness Don’t Own Me For Long is particularly poignant).

The A-frame attic set sometimes gets in the way, and the directing is a little undemanding, although Jonnie Riordan adds expressive movement to ensure a touching 90 minutes. 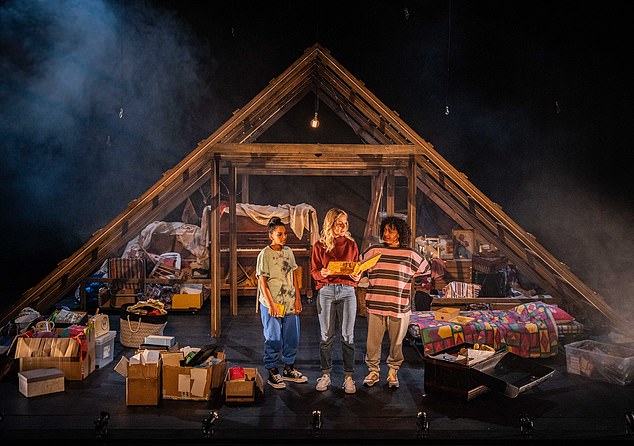 Runaway Princess is the life story of 70-something actor Mary Goggin, who abandoned her upbringing as an Irish Catholic in New York in the Sixties and fell into the hands of pimps and drug dealers.

After umpteen abusive relationships and serious drug and alcohol abuse, an unexpected pregnancy finally shook her out of her torpor and she’s been on the straight and narrow for 33 years.

Which is quite an achievement. But as well as unvarnished facts, we need the vicarious pleasures of a good story to fully share her pain. She could do with the help of a writer, but I still take my hat off to her. 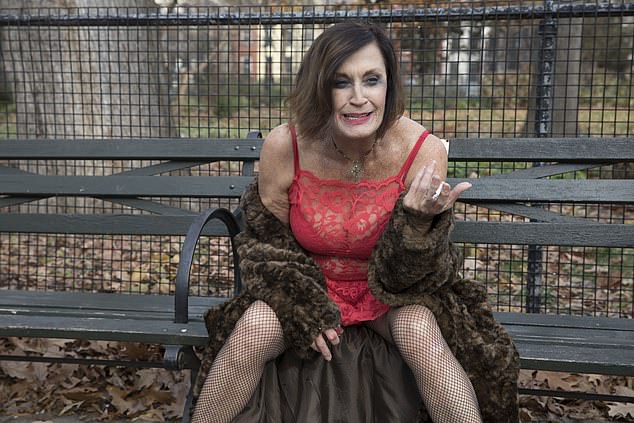 Runaway Princess is the life story of 70-something actor Mary Goggin, who abandoned her upbringing as an Irish Catholic in New York in the Sixties