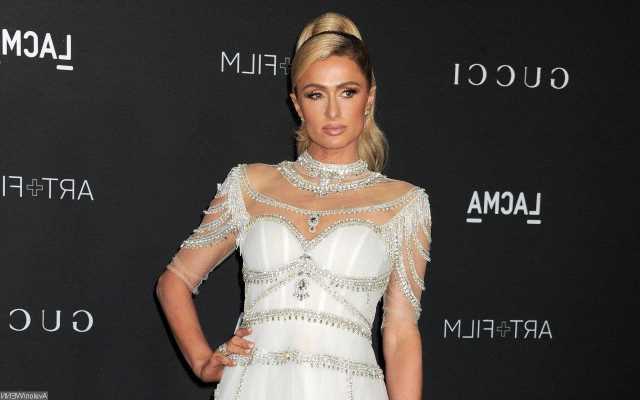 The ‘Paris in Love’ star looks beautiful in a semi-sheer floral lace gown that she reportedly only selected ‘late last night’ ahead of the lavish Bel-Air nuptials.

AceShowbiz –Paris Hilton has confirmed her wedding news. Just hours after reports swirled about her marriage ceremony with Carter Reum, the new bride has taken to her Instagram account to mark the new chapter in her life.

On late Thursday, November 11, the socialite shared the first picture of her nuptials, offering a glimpse of her wedding dress. For the special day, the 40-year-old looked stunning in a semi-sheer floral lace gown with a veil covering part of her face.

She also sported what looked like a diamond earring while her blonde hair was styled in an updo with a small part of it hanging loose on one side of her face. “My forever begins today… 11/11,” so she captioned the snap, which did not include her new husband.

Paris and Carter tied the knot at her late grandfather Barron’s Bel-Air estate in Los Angeles. According to E! News that broke the news, a source said, “Paris selected her dress late last night. There is a lot of love and support surrounding both Carter and Paris.”

The ceremony was attended by a number of Hollywood celebrities, such as Paula Abdul, Kyle Richards, Bebe Rexha, Emma Roberts, who came hand-in-hand with a man who is not Garrett Hedlund, and Evan Ross. Paris mother Kathy Hilton and sister Nicky Hilton also did not miss the star-studded event.

The Thursday ceremony is part of a three-day affair, which will continue with a Friday night carnival on the Santa Monica Pier and a black-tie event on Saturday.

Ahead of their wedding, Carter got sentimental as he teased what their special day would be like. “It is definitely going to be your fairytale wedding,” he said in a November 11 episode of “This Is Paris” podcast, adding, “That first kiss and that first hug and as we always say, the electric bolts that are going to shoot between us-I’m going to think about all those memories.”