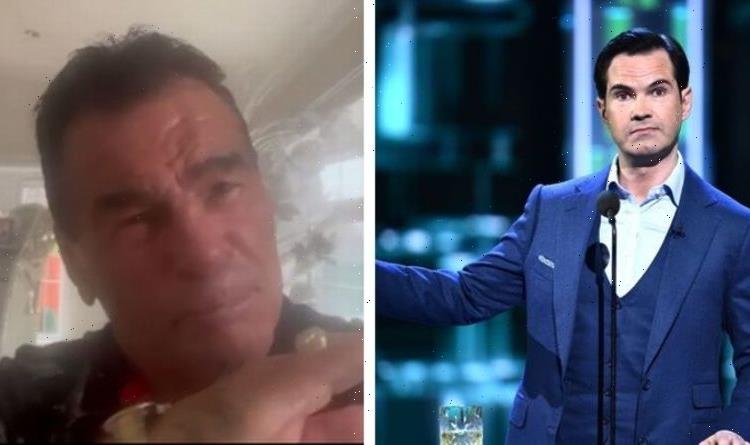 WARNING: This article contains material that some may find offensive.

Comic Jimmy Carr is known for pushing the boundaries – but this time many feel he has gone too far, and My Big Fat Gypsy Wedding star Paddy Doherty wasn’t afraid to tell him. Publicly addressing Carr’s latest Netflix special, he compared the comedian to Jimmy Saville and called out the joke he’d made at the expense of “the most hated community in the world”.

I put him like Jimmy Saville… how he could even discuss about killing us, and thinking positive to kill us like we’re vermin

The latest Jimmy Carr special, His Dark Material, came with a trigger warning as it was loaded with jokes that had the potential to be offensive and upsetting.

However, a backlash began over one in particular that poked fun at Jews and travellers simultaneously.

The 8 Out of 10 Cats comedian had said: “When people talk about the Holocaust they talk about the tragedy of six million lives being lost to the Nazi war machine, but they never mention the thousands of Gypsies killed by the Nazis, because no one wants to talk about the positives.”

Seemingly oblivious to the joke’s poor taste, the audience erupted into laughter and applause.

However, this was one insult Paddy wasn’t about to simply laugh off.

“How this fella has turned this into a joke is beyond me… it’s disgusting, on a different level,” he exclaimed.

“Travellers… we’re the most hated people on the planet, honest to God it’s true, and what have we ever done to anyone, I don’t know.

“I am truly, truly disgusted.”

“Our ancestors got killed in the Holocaust, do you know what I mean?” he blasted, “[and] hundreds of thousands, millions of people.”

He even compared the comedian to Jimmy Saville at one point during his traumatised speech, delivered on Instagram.

“I put him like Jimmy Saville… how he could even discuss about killing us, and thinking positive to kill us like we’re vermin,” he exclaimed.

During the rant, he also stated his support for the Jewish community who had been targeted, telling the world: “God bless them.”

Some of Paddy’s 30.7 thousand followers, who saw the post, took to the comments section to echo his revulsion.

@leestanleynfa supportively wrote: “Respect to ya Paddy, f**k the haters, there’s a special place in hell for them sort… God bless.”

@taylors_maid chimed in to exclaim: “It’s disgraceful Paddy, it’s racial abuse , but it’s ok for some reason and the media see no wrong in it!”

@kearney.martina added: “Nothing but love for travellers and all god’s children.”

Meanwhile, the Holocaust Memorial Day Trust’s chief executive, Olivia Marks-Woldman, said in a statement: “We are absolutely appalled at Jimmy Carr’s comment about persecution suffered by Roma and Sinti people under Nazi oppression, and horrified that gales of laughter followed his remarks.

“Hundreds of thousands of Roma and Sinti people suffered prejudice, slave labour, sterilisation and mass murder simply because of their identity – these are not experiences for mockery.”

Meanwhile, MP Nadia Whittome tweeted that she had written to Netflix “urging [them] to remove Jimmy Carr’s vile anti-GRT and antisemitic material.”

Netflix has declined to comment on the scandal so far.