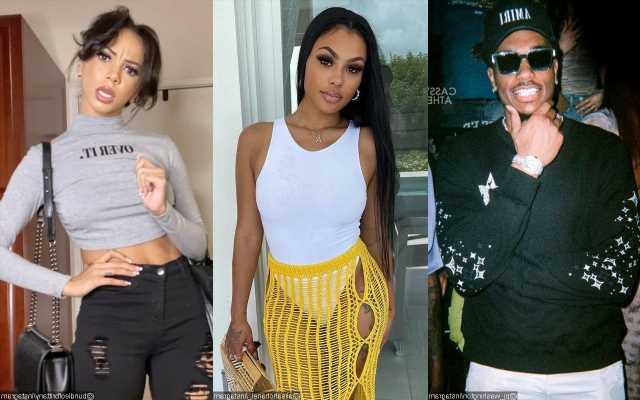 The Charlotte Hornets player is cozying up to his alleged new girlfriend in a selfie taken by the social media influencer while being locked up in child support battle with his ex Brittany.

AceShowbiz –P. J. Washington seems to be wasting no time dwelling on his broken relationship with Brittany Renner. Less than two months after they broke up, the NBA star appears to have moved on with another Instagram model, Alisah Chanel.

In a picture which has surfaced online, the rumored lovers put on an intimate display as they cozied up in what looks like his wardrobe closet. The 23-year-old athlete, who is towering over the petite influencer, was seen wrapping his arms around her neck while she snapped their picture with her phone camera.

It’s unclear since when they have gotten close to each other or if they are officially dating.

P. J. was previously in a relationship with Brittany. They confirmed their romance on the latter’s 29th birthday in February, but it was believed that they had been dating for over a year at the time.

In March, they announced that they were expecting their first child by sharing a series of maternity pictures. “Can’t wait to meet my lil man,” the Charlotte Hornets player wrote alongside the photos. Brittany, meanwhile, captioned the black-and-white version of the snaps with, “My king and prince.”

They welcomed their first child together in May, but they sparked split rumors in July, with P. J. seemingly accusing her of “faking” relationship to get a baby out of him. “You was faking it all along,” so read his cryptic tweet.

In August, news emerged that he had to pay his ex $200,000 a month in child support. The Charlotte Hornets player, however, put the rumors to rest as he tweeted on August 11, “Stop the [cap].”

Brittany herself gave a more straightforward response to the speculation. “What money?” she wrote in a now-deleted tweet. “People actually believed that 200K a month post??? Chile I thought it was a damn joke oh wow.”

Later in the same month, P. J. seemed to throw shade at Brittany as he claimed he wasn’t allowed to see his baby boy. “I miss my son,” he wrote on his Instagram Story, before telling his followers, “Protect your assets. He also wrote, “cant wait to squeeze you again” and “Can’t wait to see my lil man again,” over other pictures of the infant.

Not long after, however, he reunited with his son. Documenting the moment, he shared a picture of him “back with twin” a.k.a. his newborn baby boy. In the image, the new father dressed in a green jacket and matching greet hat, while holding his son who wore a gray outfit.